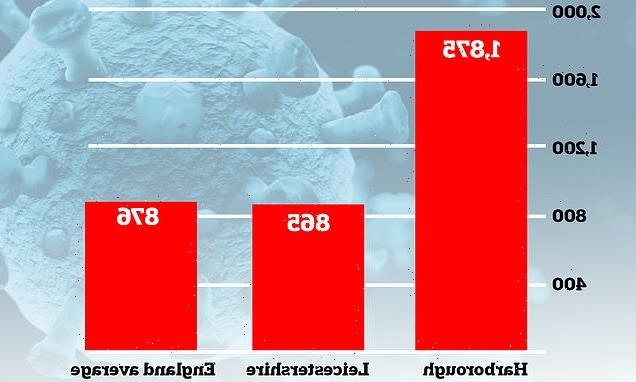 Students celebrating their A-level results have been blamed for a Covid surge in an historic market town in Leicester.

Young people returning from foreign holidays may also be behind high Covid infections, the region’s health official has warned.

Mike Sandys described cases as ‘astonishingly high’ and ‘a real worry’. He said young people going to A level results parties two weeks ago ‘helped to fuel the sharp rise in infections’.

It comes as infection rates among all age groups in Harborough jumped 18 per cent in the last week.

The local health chief warned half of the intensive care unit beds at Leicester’s three main hospital are taken up by Covid patients, nearly a third of which are aged under 45. 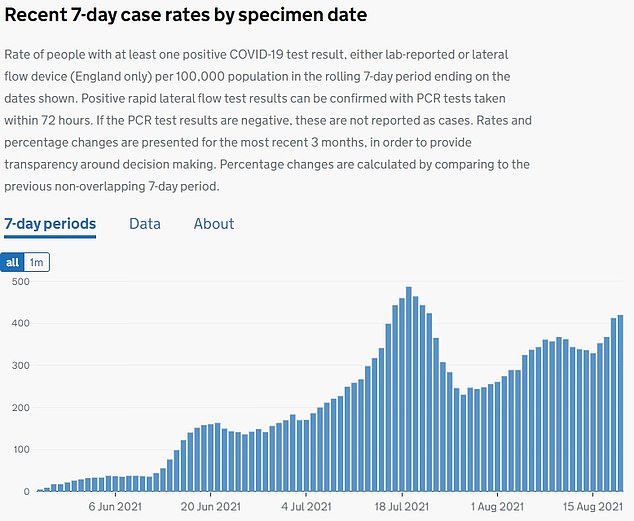 More than 1,000 people who attended Latitude Festival last month have tested positive for coronavirus, according to reports.

The three-day festival was part of the Government’s Events Research Programme and attended by around 40,000 people.

Festivalgoers had to show proof of a negative Covid test or be fully vaccinated to access the site at Henham Park in Suffolk.

But data released by Suffolk County Council shows 1,051 people tested positive in the days after the event.

It also shows that 619 people got infected at Latitude, while 432 were infectious at the time of the event.

Of those, 175 were people living in the county.

Stuart Keeble, director of Suffolk Public Health, has said: ‘As Suffolk reopens once again and people attend busy events or attractions, it’s important that people continue to be considerate of others and wear a mask or keep their distance where appropriate.

‘Covid is still circulating in the county and whilst the majority of us are double jabbed, we cannot be sure that those people around us won’t become very unwell if they catch it.’

Other test events by the Government were the Euro 2020 semi-finals and final at Wembley and the Tramlines music festival in Sheffield.

Culture Secretary Oliver Dowden said: ‘We’ve shown that we can reintroduce mass sports and cultural events safely but it is important that people remain cautious when mixing in very crowded settings.

‘So that we can keep the football season, theatres and gigs safe with full crowds this winter, I urge sport, music and culture fans to get the vaccine as this is the safest way we can get big events firing on all cylinders once more.’

It comes after health officials said they were investigating 4,700 cases of coronavirus which are suspected to be linked to the Boardmasters festival, which took place nearly two weeks ago in Cornwall.

The cases are spread across the country but around 800 are living in the county, a council official has confirmed.

Mr Sandys told the Harborough Mail the infection rate in that age group is ‘astonishingly high’ in the district, but he hopes it is a ‘temporary blip’.

He said: ‘This is a real worry, there’s no two ways about it.

‘Something has suddenly gone awry in Harborough and it’s very difficult to say precisely what that is. So – what’s going on?

‘We had the A-level results issued on Tuesday August 10 and GCSE results two days later on Thursday August 12.

‘No doubt we had a lot of parties thrown right across Harborough as children and their families celebrated their successes.

‘They will all have helped to fuel the sharp rise in infections. I know that parties will have been held elsewhere in Leicestershire too, of course.

‘But maybe teenagers in Harborough did especially well and had even more get-togethers.’

He said teenagers going on holidays and to festivals could also adding to the surge in cases.

Mr Sanys added: ‘We know for a fact that up to 40 cases here in the district stem from the Boardmasters music festival down in Newquay in Cornwall alone.

‘The weather’s not been so good lately. So more teenagers will have been spending more time indoors – watching the TV or on their X-boxes.

‘So this dramatic climb in the rate of Covid infection is down, as always, to a special combination of different factors.’

And he warned people to be ‘sensible’ and take Covid tests during the upcoming bank holiday weekend and at Reading and Leeds music festivals.

Mr Sandys said those age 16 and 17 should not hesitate in getting a Covid vaccine, because it is ‘the best defence we’ve got’ against the virus.

It comes as infection rates among the population of Harborough (420) are also higher than the figures for Leicestershire (375) and England (334).

One week earlier, just 343 people per 100,000 in Harborough were infected, showing cases have climbed by 18 per cent in seven days.

He said this is ‘quite a steep percentage rise’ but it is ‘impossible to pinpoint exactly why that is’.

And it is impacting Leicester’s major hospitals  – Leicester Royal Infirmary, Leicester General and Glenfield – where 23 of their combined 50 intensive care beds occupied by Covid patients.

Some 30 per cent of the people in hospital are younger than 45.

He said: ‘I suspect we’ll be in for a fairly choppy ride this winter with flu and other seasonal illnesses to come on top of the coronavirus.

‘So I’m calling on everyone to act sensibly and responsibly and unite together to stop Covid infection rates rising – and to start to push them back down again.’

Meanwhile, cases are also disproportionately high among 11 to 16-year-olds in Harborough (862), compared to Leicestershire (583) and nationally (444). 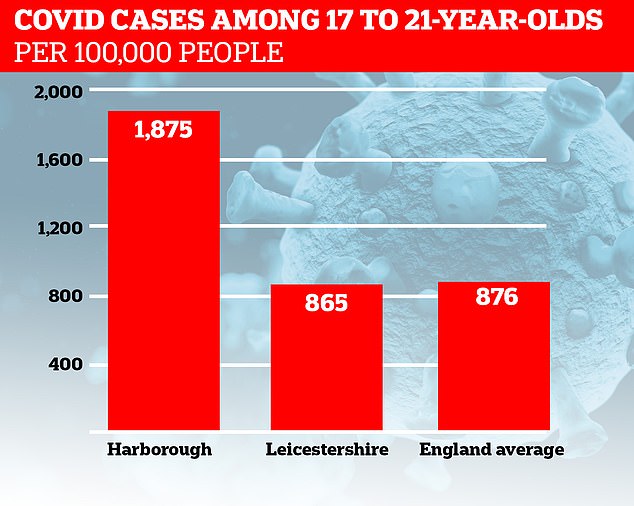 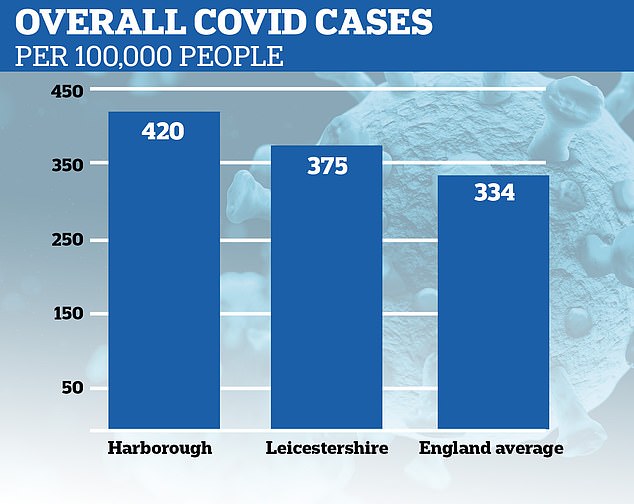 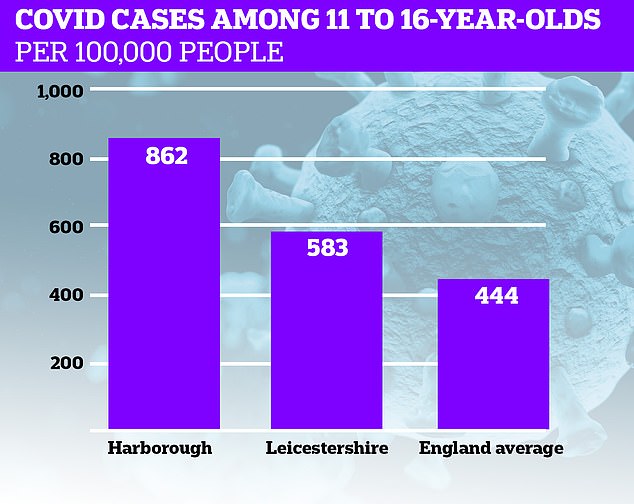 Mr Sandys said it’s not unsafe for students to head back to school next week, but they should be ‘extra cautious’ while cases are so high, to reduce the risk of passing the virus on to their family.

‘We can’t simply lock them away in their rooms if they have the coronavirus.

‘But everybody should be taking sensible precautions to try to stop transmission spreading right throughout the entire family.’

If a child tests positive, their home should be kept well-ventilated, social distancing should be implemented, surfaces should be cleaned regularly and people in the household should, he said.

The health chief added: ‘Just do not do silly things. Let’s stop this sudden dramatic hike in cases now – and let’s stop it moving on up the age range.

‘We’ve had glitches and blips like this in Harborough before.

‘And every time that’s occurred people have responded well and the figures have fallen again quite quickly. Let’s do that again now.’