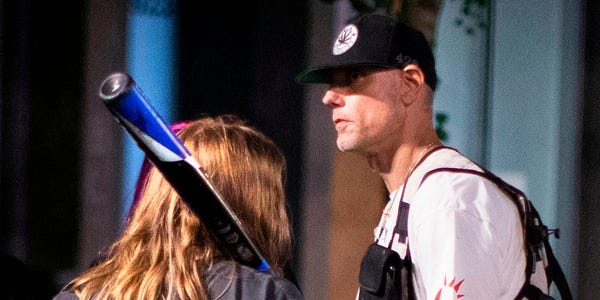 A man suspected of shooting a right-wing Patriot Prayer supporter in Portland, Oregon, on Saturday said the protest was a "free-for-all' with no police intervention in an interview given before he was killed by authorities on Thursday night.

Michael Reinoehl was suspected of fatally shooting Aaron Danielson, who was taking part in a caravan supporting President Donald Trump, organized by Patriot Prayer, on Saturday night. Reinoehl was later killed in an encounter with a federal fugitive task force on Thursday night in Lacey, Washington, according to The New York Times.

But before his death, he sat down in an interview with freelance journalist Donovan Farley, in footage that was shared with Vice News.

Reinoehl said in the footage that he shot the Patriot Prayer supporter because he feared for his life and his friend's life, and didn't see any police officers who could intervene.

"There was definitely nobody in sight, no police officer, nobody at all that could intervene. It was a free-for-all. And the police were letting it happen," he said.

Bystander footage from the incident shows a man appearing to be Reinoehl shooting Danielson and walking away from the scene.

Reinoehl did not turn himself in to police. He was later killed was federal agents tried to arrest him Thursday evening.

This was not Reinoehl's first run-in with the authorities. In June, both he and his 17-year-old son were stopped for driving over 100 m.p.h on Interstate 84. On July 5, he was cited after police said he was carrying a loaded gun in public and for resisting arrest. And on July 26, Reinoehl was shot in the elbow during a confrontation between himself and a gun-carrying man named Aaron Scott Collins.

Reinoehl was allegedly estranged from his family, one of whom told CNN he had a "stick it to the man mentality." According to Reese Monson, a friend and fellow organizer, Reinoehl was trained in de-escalation techniques.

Just hours before his death, Reinoehl spoke with a friend Tiffanie Wickwire, about setting up a GoFundMe to support his two children, 17 and 11.

"We were talking about his kids and what to do for them if anything happened to him," she told the New York Times.

Protests have been ongoing in Portland since the May 25 death of George Floyd, who was killed by police in Minneapolis, Minnesota, when an officer knelt on his neck for nearly nine minutes.