Sanctions against Russia will intensify as world leaders condemned Russia’s invasion of Ukraine, saying the Russian President has chosen a path of “death and destruction” and warned that the world will respond in a “united and decisive way”.

Prime Minister Scott Morrison said the international community is banding together to condemn the “outrageous attacks” on Ukraine by Russian military forces. 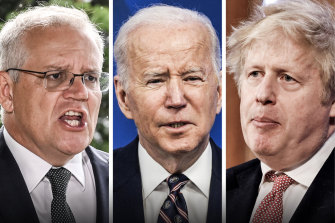 “I’ll call it what it is. The Russian government launched a brutal invasion, unprovoked, on Ukraine, and should be condemned for doing so – and Australia does,” Mr Morrison said.

“The footage that is emerging of missile strikes, air-raid sirens, and reports of hundreds of casualties, as yet unconfirmed are, sadly, not surprising given the events we’ve been witnessing for some time now, and have been warning about.”

The Prime Minister said Australia called on the Russian government to withdraw troops from Ukraine and pursue a peaceful solution.

“We denounce what are unilateral hostile actions in Ukraine. Russia is flagrantly breaching international law, and the UN Charter. Russia has chosen war,” he said.

Australia is introducing further sanctions on 25 Russian army commanders, deputy defence ministers, mercenaries and organisations following the invasion. The federal government will also move to sanction more than 300 members of the Russian Parliament.

“We must ensure there is a cost for this violent, unacceptable, and egregious behaviour. There must be a cost,” Mr Morrison said.

Leaders from the US, UK, Canada, France, Germany, Italy and Japan will meet tomorrow to discuss further sanctions and the developing conflict, after Russia launched an attack on Ukraine as the United Nations Security Council met late on Wednesday evening New York time.

Ukraine President Volodymyr Zelensky declared martial law following the start of the offensive as journalists from several news outlets on the ground in Ukraine reported explosions in several cities including Kyiv and Kharkiv.

US President Joe Biden said Russian President Vladimir Putin chose a premeditated war that will bring “a catastrophic loss of life and human suffering”, and vowed that the world would hold Russia responsible.

“Russia alone is responsible for the death and destruction this attack will bring, and the United States and its Allies and partners will respond in a united and decisive way,” President Biden said in a statement.

In a phone conversation with President Zelensky, President Biden told his Ukrainian counterpart what steps the international community was taking in response to Russia’s aggression.

“Tomorrow, I will be meeting with the leaders of the G7, and the United States and our allies and partners will be imposing severe sanctions on Russia,” President Biden said.

“We will continue working closely and quickly with NATO and our allies to collectively respond to these reckless and dangerous acts, including by imposing significant sanctions in addition to those already announced,” he said.

British Prime Minister Boris Johnson said the UK and its allies will respond decisively to Russia’s act of aggression.

“I am appalled by the horrific events in Ukraine and I have spoken to President Zelensky to discuss next steps,” he tweeted.

“President Putin has chosen a path of bloodshed and destruction by launching this unprovoked attack on Ukraine.”

“In the name of humanity, do not allow to start in Europe what could be the worst war since the beginning of the century,” he said.

The United Nations was holding a meeting of the security council with countries calling for de-escalation as the offensive began.

“Russia’s actions are a flagrant breach of fundamental international rules,” she said in a statement.

“All Australians stand with the people of Ukraine, and are united in condemnation of Russia’s shameful act of aggression,” they said in a joint statement.

On Thursday morning, Australia’s Governor-General David Hurley signed amended sanctions regulations, which give the government the ability to sanction individuals who are supporting Russia’s actions in Ukraine.

Announcing the updated sanctions laws, which come into effect at the end of March, Mr Morrison said it was important to deter countries like China from making similar military incursions into other sovereign nations.

“I think it is important for like-minded countries to take the strongest possible action, because one day it’s a country like Russia threatening the border and seeking to invade Ukraine, and the next it could be countries in our own region seeking to do the same thing,” he said on Thursday morning.