With Australian coal stacked up off Chinese ports and almost weekly news of a new Chinese embargo, Australia's new Trade Minister, Dan Tehan, is eager to sell to India. He wants to reopen negotiations on the Australia-India Comprehensive Economic Co-operation Agreement, begun in 2011 and stalled since 2015. And given the current state of the Australian economy, time is of the essence.

India has the world's sixth-largest economy, and despite being hard hit by the coronavirus pandemic, it is sure to rise to fifth place before long, trailing the United States, China, Japan, and Germany. It is also a perfect partner for Australia, importing coal, gas, copper, gold and aluminium. So what's the problem? 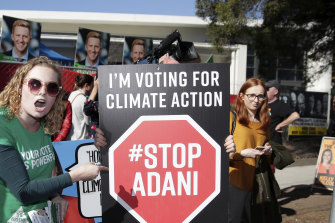 While the Adani coal mine has attracted massive national and international criticism, China’s Shenhua mine in NSW has been more low key.Credit:Alex Ellinghausen

In a word: Adani. Central Queensland's Carmichael coal mine, under development for a decade and now expected to begin operations in 2021, has had to face every barrier in the book – and some new ones that were invented after the book was published. Owned by India's Adani Group, the mine's operating company has been renamed "Bravus" to reflect the bravery it has taken to get the project done.

Environmental activists have fought the project at every turn, and fair enough: you can't expect green groups to endorse a new coal mine. But the fight over the Adani mine illustrates the difficulties in cultivating India as an export destination. The problem is that India plays fair – and Australia, ironically, works best with partners who play foul.

Compare the storm over Indian-owned Adani with the much milder resistance to the Chinese-owned Shenhua Watermark project at Liverpool Plains in NSW. Both projects propose to extract and export 10 millions tonnes of coal a year. Adani transparently admits that its coal will be burned for electricity generation, sparking controversy over the mine's potential contribution to global warming.

Shenhua dubiously claims that most of its coal will be used for steelmaking, despite the fact that the semi-soft coal found at Liverpool Plains is considered inappropriate for metallurgical use and can also be used as thermal coal for electricity generation. How will Shenhua Watermark coal actually be used once it disappears into the Chinese market? Australian activists don't have to know.

Adani has faced severe criticism over its environmental record in India and other countries, despite the fact that its record seems no worse than (and perhaps better than) many major Western companies. Based in a democratic country and operating under the rule of law, Adani must answer to governments, courts and NGOs.

Shenhua is a Chinese state-owned enterprise directly overseen by the State Council. It is accountable to no one but the Communist Party of China. Its environmental record is … opaque.

Environmental activists have very effectively lobbied listed banks and insurance companies to deny financing for the Carmichael mine. Swedish teenager Greta Thunberg even appealed to Germany's Siemens to refuse to supply signalling equipment for the mine's dedicated railroad, after Australian rail operators yielded to activist pressure not to carry Carmichael coal. Shenhua doesn't need independent financing or equipment. Everything it needs will come from China.

All mines involve environmental risks, and all coal contributes to carbon emissions. If Australia wants to stop mining coal, it should, as the activists demand, stop Adani. But it's a bit rich for Australians to be simultaneously alarmed about Carmichael coal and China turning away Australian coal, but welcoming Chinese coal investment, to boot.

Australia has long gotten everything it wanted from China: export sales, inward investment, skilled immigrants – and plausible deniability. From coal exporters to university vice-chancellors, everyone knows that dealing with China requires some level of moral ambiguity. They can argue that engagement is better than dissociation, but they can't pretend to believe that the Chinese regime is in any sense "good".

Ironically, it is precisely China's opacity and repression that shields Australians from facing the moral consequences of profiting from China.

India has problems, too, and Indian companies should not be given a free pass on the argument that Chinese companies are even worse. But Australians should cut India at least as much slack as it cuts itself. Better yet, Australia should adhere to the same high standards it applies to India. If it did, Australia might find itself free of its China entanglements and welcoming a new partner in Asia.

Salvatore Babones is an associate professor at the University of Sydney and a columnist for Foreign Policy magazine.