Washington: A Bel Air mansion where more than 1000 guns were discovered by police belonged to the former mistress of an heir to the Getty oil fortune.

The arsenal was found in a $US7 million ($9.9 million) home owned by Cynthia Beck, who had a long affair, and three children, with Gordon Getty. 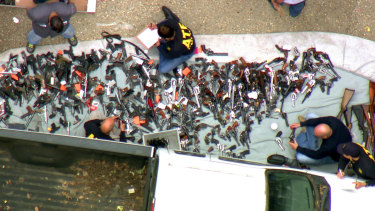 Investigators from the US Bureau of Alcohol, Tobacco, Firearms and Explosives and the police inspecting a large cache of weapons seized at a home in the affluent Holmby Hills area of Los Angeles.Credit:AP

Mr Getty, 85, son of the late oil tycoon J. Paul Getty, was once the richest man in America and is currently worth an estimated $US2 billion.

In a 4am raid, police found assault weapons, Browning machine guns, rifles, and Civil War era pistols. They arrested Girard Damien Saenz, 57, who was at the mansion, and is listed in public records as a general building contractor.

Police said he would face charges of "unlawful transportation, giving and lending an assault weapon". 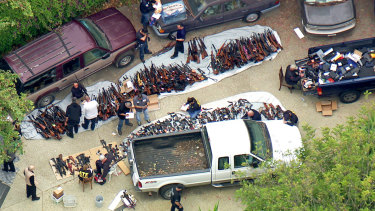 The large cache of weapons seized at a home in the affluent Holmby Hills area of Los Angeles.Credit:AP

Beck purchased the property in 2001 but neighbours said she had not been seen there for several years and was now living in Europe.

It is close to the Playboy Mansion, and the house where Michael Jackson died, and less than a mile from the home of Jay-Z and Beyoncé, the pop stars. As police inspected the weapons outside the mansion, buses passed by showing tourists around celebrity homes.

Stars who live, or have lived, nearby include Barbra Streisand and Frank Sinatra. The average price of homes for sale in the area is $17 million.

The raid happened after America's Bureau of Alcohol, Tobacco, Firearms and Explosives (ATF) received a tip that guns were being sold illegally at the property.

Officers from the ATF and Los Angeles Police Department (LAPD) were later seen inspecting enormous piles of handguns and rifles placed on grey tarpaulins outside.

Chris Ramirez, an LAPD lieutenant, said: "I've never seen so many weapons in my career of 31 years. That's such a big arsenal in a residence in this type of neighbourhood.

"It's kind of astounding. The weapons are of all makes and calibres, and models. This is a big stash. "It's beyond comprehension that somebody can have so many weapons in a residence like this, in a neighbourhood like this."

In a statement at the time he said: "Nicolette, Kendalle and Alexandra are my children. Their mother, Cynthia Beck, and I love them very much. The most important concern is that the children's needs be addressed. This will be our first priority."

Neighbours in Bel Air were stunned by the discovery of the arsenal.

Rabbi Chaim Mentz, a local resident, said: "I would never, ever think anybody would be wanting to pack so much in this neighbourhood. It scares the wits out of you. What does my next door neighbour have? You don't want this in your backyard."

An ATF spokesman said: "Pursuant to an anonymous tip we became aware of an individual conducting illegal firearms transactions outside the scope of the federal firearm licence that the individual possesses.

"A large amount of firearms, manufacturing equipment, and tools have been recovered. While the search warrant continues, there have been more than 1000 firearms seized. We have no reason to believe the public is in any danger."