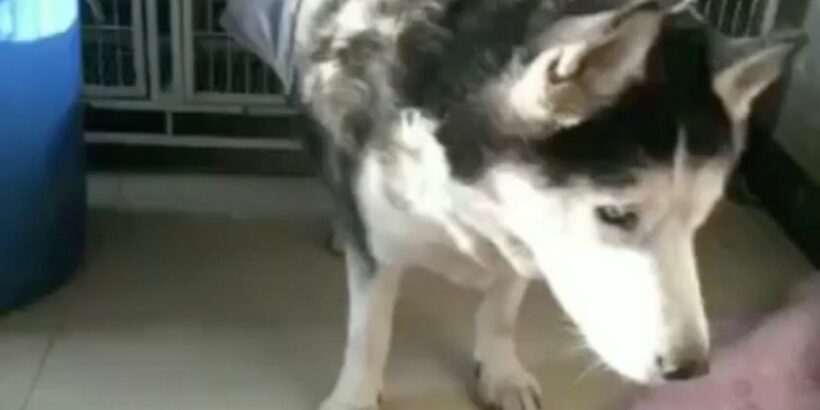 A pet dog suffering from a golf ball-sized tumour has undergone surgery after being found abandoned on the street.

The old-aged husky was left outside a police station and taken to Pingan Afu animal shelter in Nanjing, eastern China on December 3.

Volunteers noticed a hard tumour at the size of a golf ball growing on the back right above his tail.

In a post they shared on Weibo, it read: "We guessed the owner might have thought it was too risky to do surgery for the dog and worried about the expensive medical bills.

"At the end, they chose to abandon their pet outside the police station.

"The overweight husky is an old adult dog, so it will be a high risk to operate the removal of the tumour."

In the video, the poor canine appears to be suffering in great pain. The bulging tumour is almost disguised among the fur but helpers find blood clotting around the tumour.

He is then taken to a local veterinary clinic where Dr Sun stops the bleeding and removes the benign tumour.

The tumour measures about a size of a golf ball.

The canine, nicknamed HaHa by the volunteers, is now recovering at the shelter after the surgery.

The clip shows HaHa waiting impatiently by the door for his daily walk as the vet recommended it as a training to strengthen the leg muscles and loose weight.

HaHa appears to be happier after the surgery and making incredible recovery progress.

Animal lovers blasted the dog owner for abandoning the dog and thanked the volunteers for saving HaHa's life.

One wrote: "They love it when it's healthy and well. They abandon it when it's sick. That's not a responsible dog owner."

Another said: "Thank you for taking HaHa to the vet. He must have suffered quite a lot of pain."

"HaHa is a strong-willed husky," a third added. "Keep fighting!"