The house that’s frozen in time: Abandoned farmhouse includes newspaper from 1912 when the Titanic went down and century-old unopened tin cans after last owner refused to throw away relics from his family’s past

Haunting images show the inside of a decaying farmhouse in the heart of the Northern Irish countryside full of old newspaper clippings, stopped clocks and intimate love letters.

Photographer and archivist Rebecca Brownlie was invited to visit the abandoned cottage near Cookstown, County Tyrone after the last of three brothers who lived in the farmhouse died.

She discovered a cottage frozen in the early 20th century, with ancient books, magazines, newspapers and photographs littering the home of a mystery man called Dessie.

There was a mantel clock sat with its hands frozen at 12.15, and a pair of glasses left ready to use, while dozens of tins sat on shelves unopened and old tomes on gardening were in the living room.

Hundreds of love letters were left in drawers, and three old, rusting copper kettles sat on top of a stove, next to a cup that appeared to have been placed just before Dessie left. 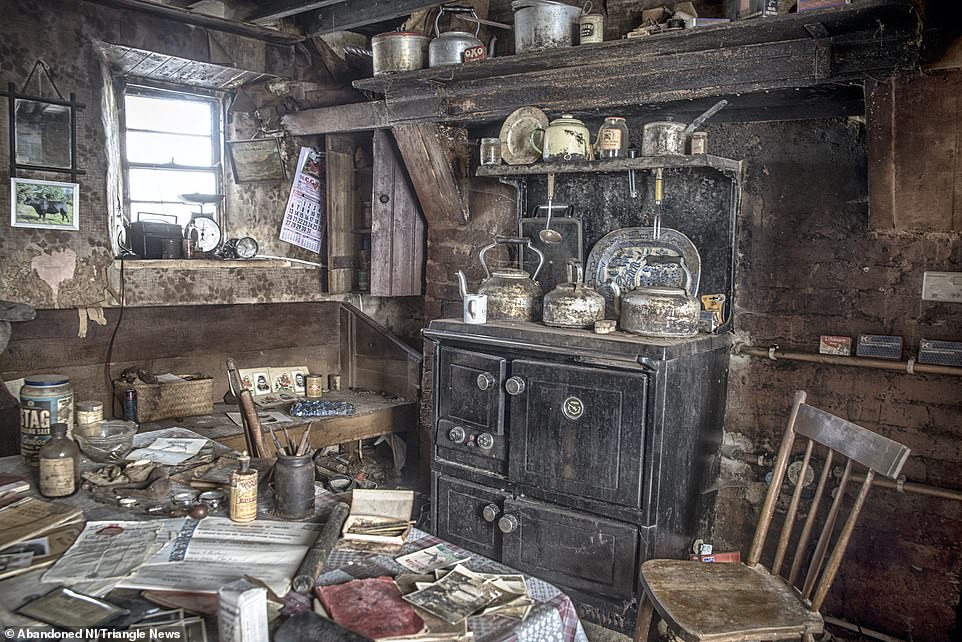 Photographer and archivist Rebecca Brownlie was invited to visit the abandoned cottage in Cookstown, County Tyrone after the last of three brothers who lived in the farmhouse died (pictured, a derelict kitchen with rusty kettles on a stove) 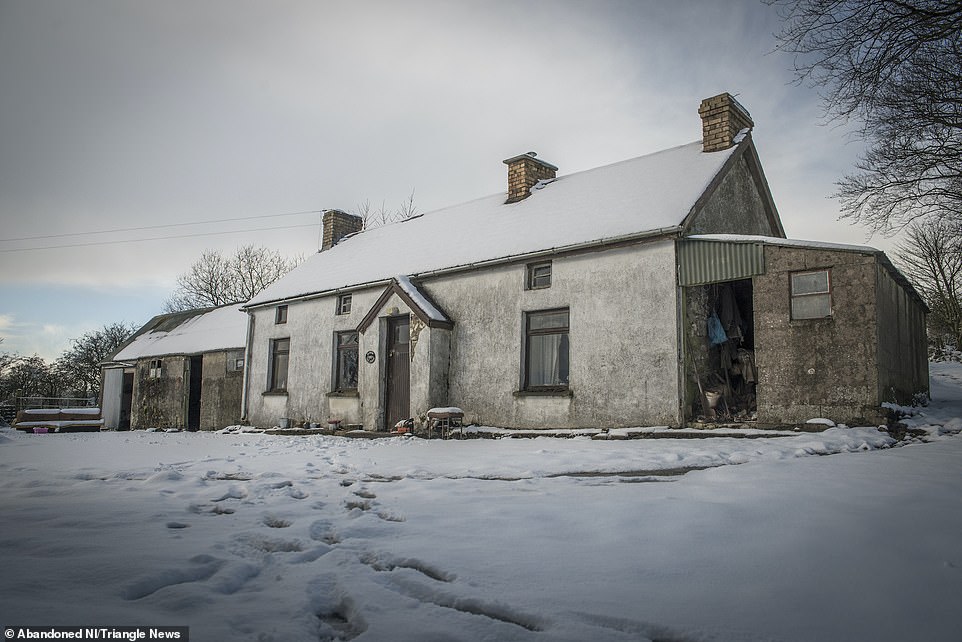 Brownlie, a mother-of-two from Northern Ireland, discovered a cottage frozen in the early 20th century, with ancient books, magazines, newspapers and photographs littering the home of a mystery man called Dessie 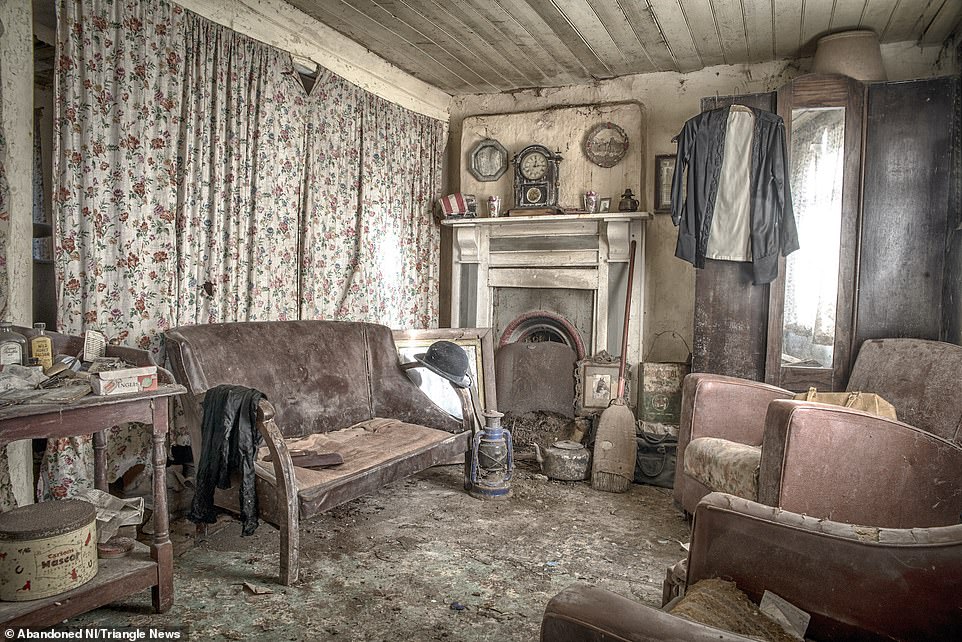 Living room: a sofa and armchairs remained untouched for decades while a stopped clock sat on top of the fireplace

Papers including the Mid Ulster Mail from 1917 were also found in the living room, while one newspaper documented the aftermath of the sinking of the Titanic in 1912. Other articles were dated as far back as 1811.

She also found a half-smoked pipe, the owner’s shoes left by his bedside, Victorian-era money and clothing, and a copy of the Ulster Covenant, the declaration signed by unionists opposed to Home Rule in 1912.

The photographer, who posts images of derelict buildings on her website ‘Abandoned NI’, visited Dessie’s cottage between December 2017 and April 2018 before the build was knocked down.

She has collected the precious items, and exhibited them at the disused four-storey Riddel’s warehouse in Belfast, constructed in 1865 for the Musgrave Iron Foundry. 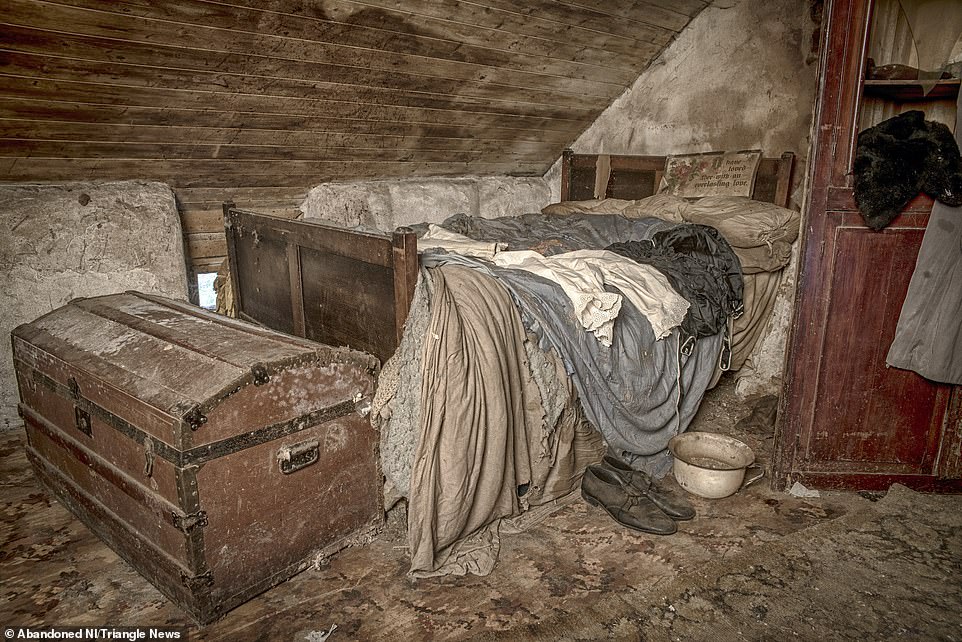 Bedroom: dirty bedsheets remained on the bed, while a chest and the owner’s shoes lay abandoned next to the bedframe 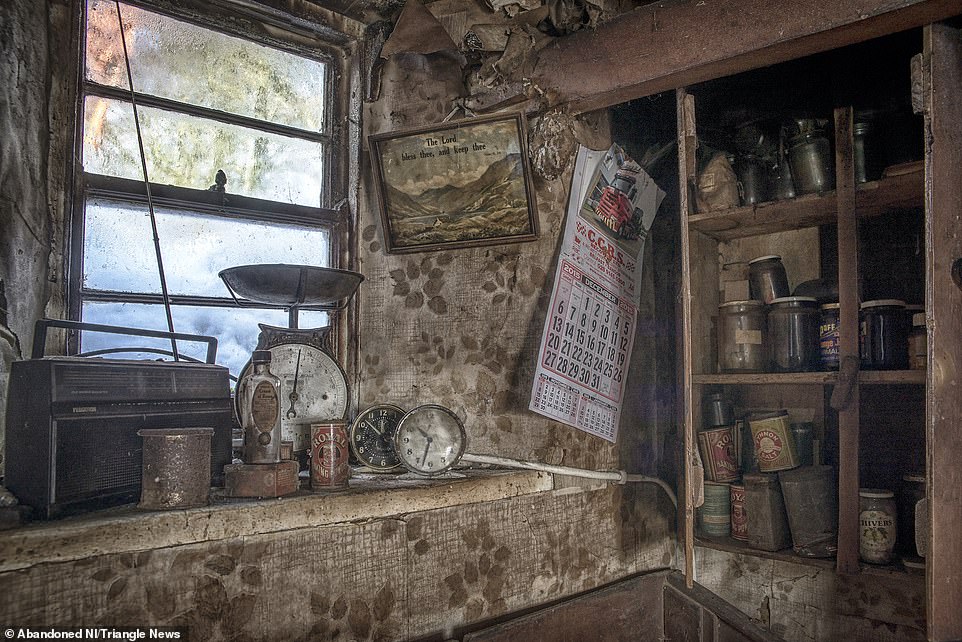 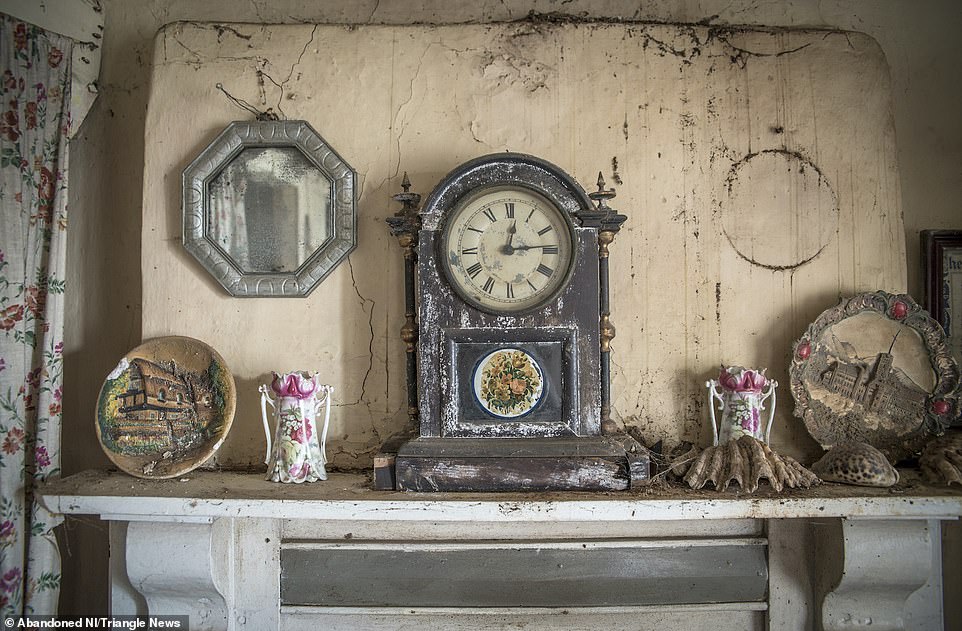 A stopped clock which tells the time 12.15 sits on top of the fireplace in the living room, untouched for decades 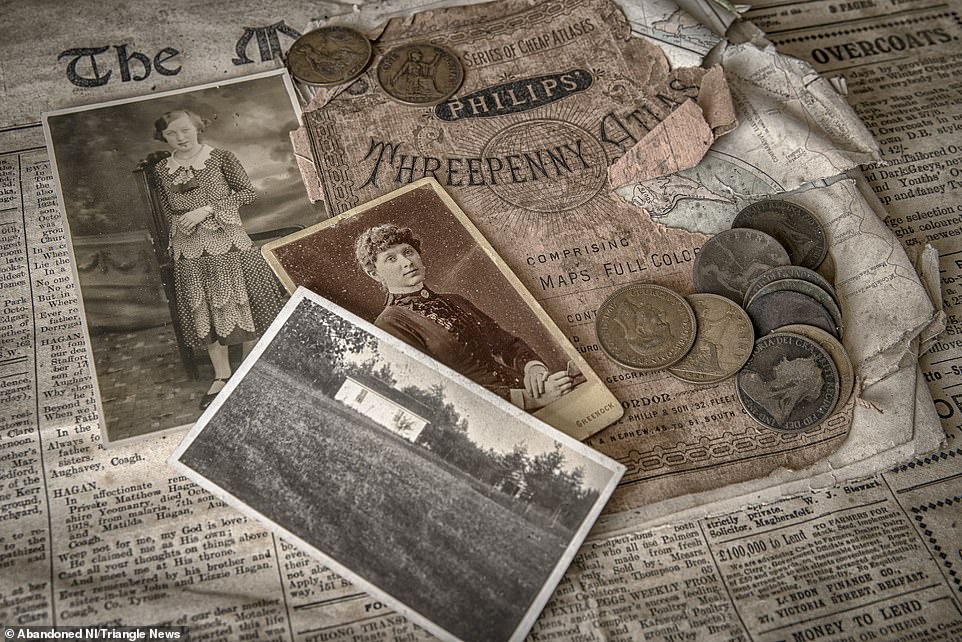 Brownlie called the cottage, which first appeared on maps in 1858, a ‘diamond in the rough’.

She said: ‘I have to admit I saw the outside and wasn’t sure if it was worth it. As soon as I opened the door I was blown away. I went into what I thought was a wee cottage and it’s basically a social history museum.’

Brownlie told The Belfast Telegraph: ‘Dessie was still living in the house and I was told he would love to have a chat with me, but he wasn’t well. Sadly, he passed away and the house was willed to his neighbour.

‘The plan was to knock down the house and build a new one but all concerned wanted me to record Dessie’s place before it was demolished. The house was a nondescript storey-and-a-half cottage, so I wasn’t really expecting much when I went there one early winter Sunday morning with the snow on the ground.

‘Once I got inside I could see the house was full of clutter and a lot of rubbish.

‘Each room was stacked high floor to ceiling with Reader’s Digest boxes, unopened. There were up to 200 magazines but they weren’t in great condition because of the damp.

‘Once I took a walk through each room and had a proper look I was blown away by the historical items that were left here. This literally was the diamond in the rough.’

Little is known about Dessie, save for that he was a dairy farmer and apparently a ‘fabulous cook’.

Brownlie said: ‘Among many things he was a fabulous cook, many friends still talk about his famous soda bread which he cooked over the original stove. He was a hearty farmer, milking cows to produce milk and butter. 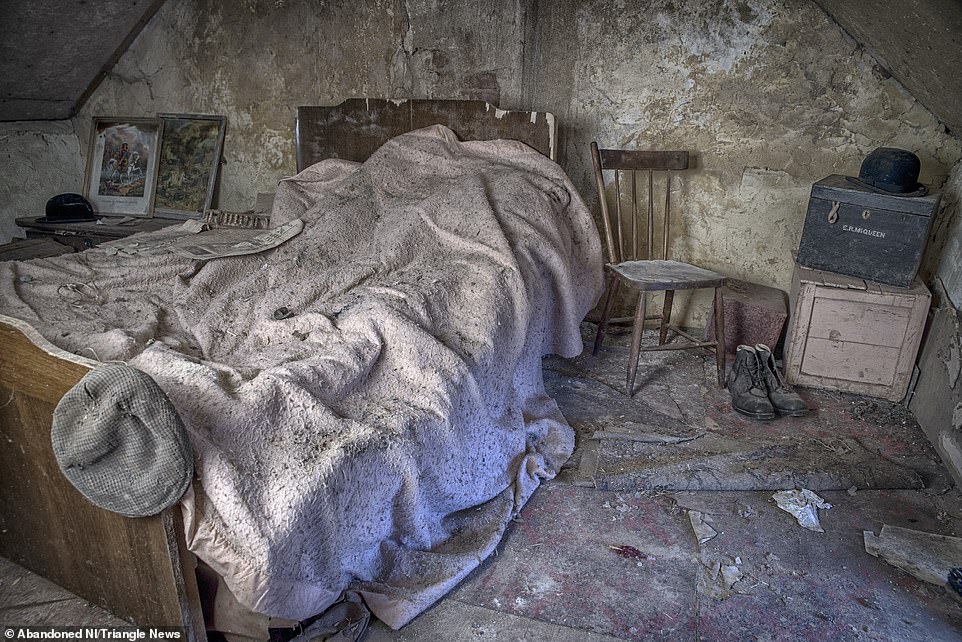 Bedroom: dirty bedsheets and a duvet lay on the bed while a wooden armchair and pair of shoes lay next to the frame 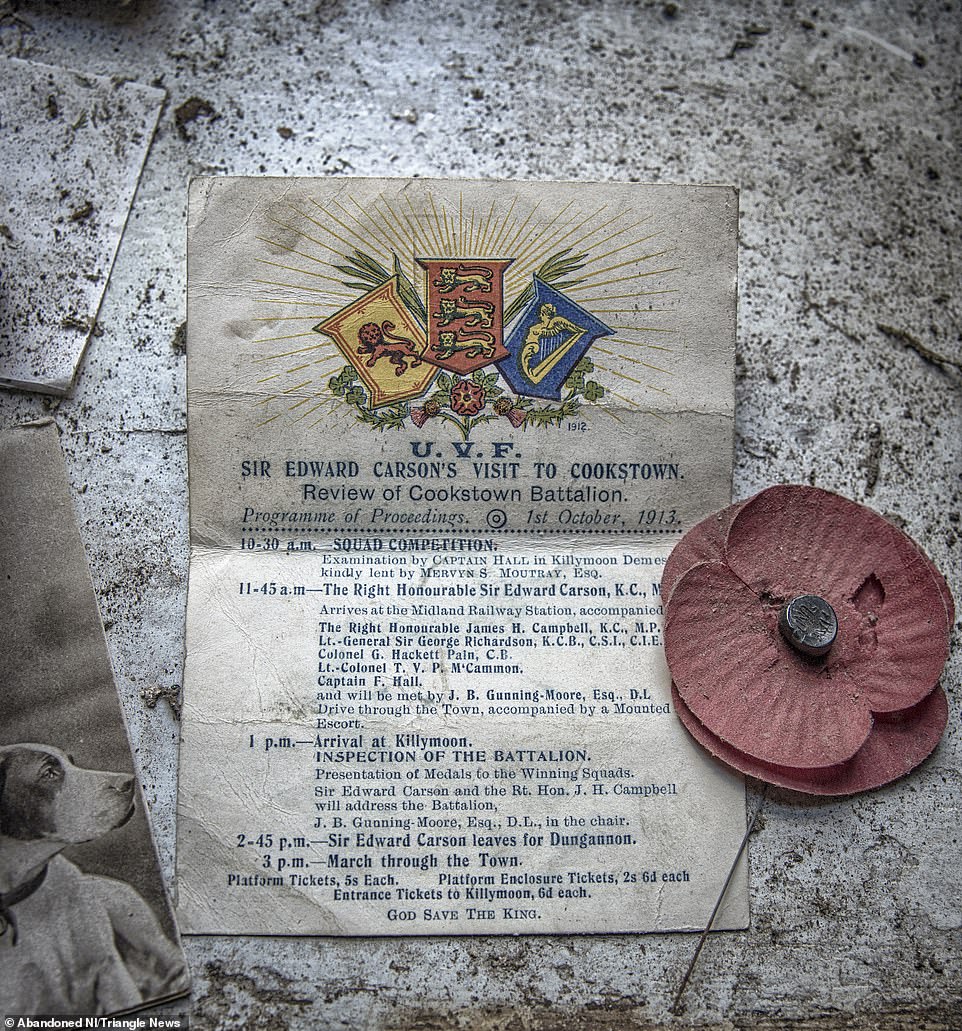 A copy of the 1912 Ulster Covenant, the declaration signed by unionists opposed to Home Rule, was found 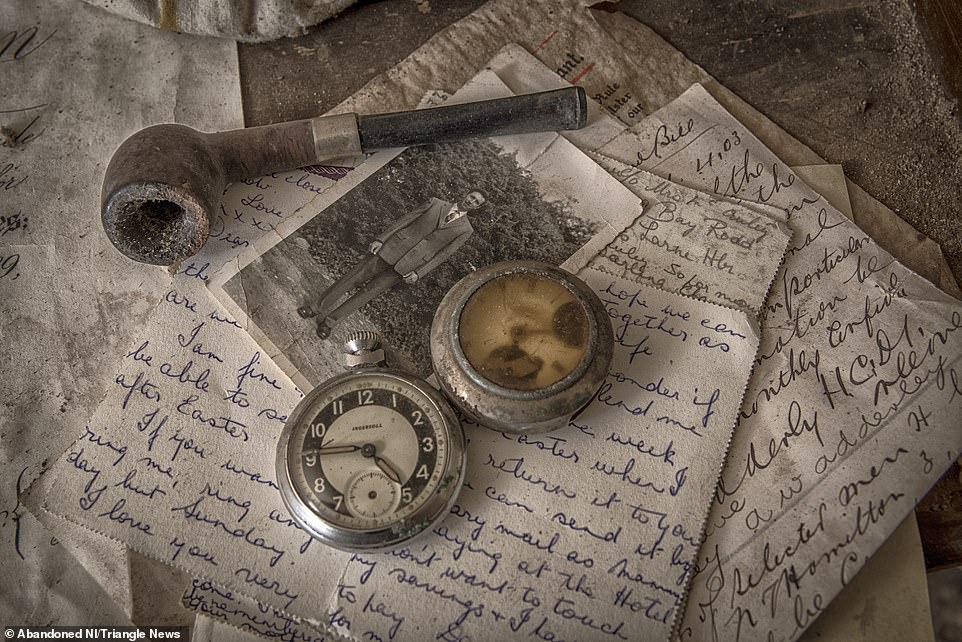 Brownlie found an old half-smoke pipe next to a pocket watch, a black-and-white photograph and letters

‘It was reported if you stayed for dinner in the house and you finished up, you were given another dinner for seconds! No one left with an empty stomach.’

She also found a collection of personal items belonging to an Edwin McQueen, who Brownlie worked out was actually married to Dessie’s mother for two years before he died.

McQueen was a policeman and his military box can be seen in the corner of one of the bedrooms along with a certificate from 1894 and a picture of him in a frame in his police uniform.

Brownlie eventually curated her own museum exhibit featuring the items – including two perfectly recreated rooms from Dessie’s house – which went on show in Belfast.

She went on: ‘Homes like this are the reason I love to photograph and document these buildings.

‘There are so many places around the country just like this lying untouched and pretty soon they’ll be gone too and we’ll have no record of them being there.’