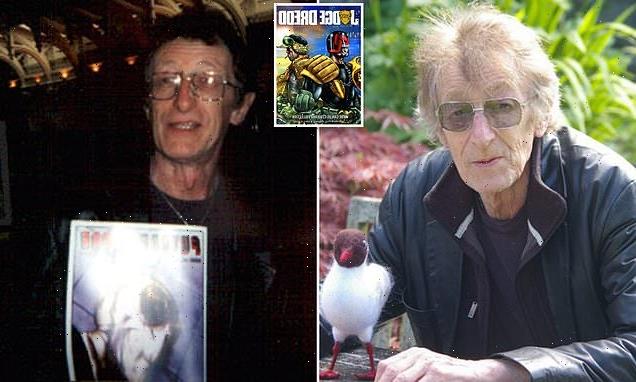 Acclaimed British comic book writer Alan Grant who was known for his work on Batman and Judge Dredd dies, aged 73, after being ‘unwell for some time’

Mr Grant has been described as an ‘unsung hero of UK comics’ as tributes poured in for ‘one of the greats’.

His wife Sue confirmed he had died in a Facebook post, saying: ‘I have no words. Alan died this morning.’

After entering the industry in 1967, Alan rose to prominence with his writing on Batman and the 2000AD series in which he was helped create of Judge Dredd.

In a statement paying tribute, 2000AD said it was ‘devastated’ to hear of his death and described his ‘profound and enduring influence’ on the industry.

It said: ‘Grant was one of his generation’s finest writers, combining a sharp eye for dialogue and political satire with a deep empathy that made his characters seem incredibly human and rounded.

‘Through his work he had a profound and enduring influence on 2000 AD and on the comics industry.’

Although ill for some time, Alan continued to write for 2000AD, with his last work a Judge Anderson story in 2018 and a war story named the Battle Special in 2020. 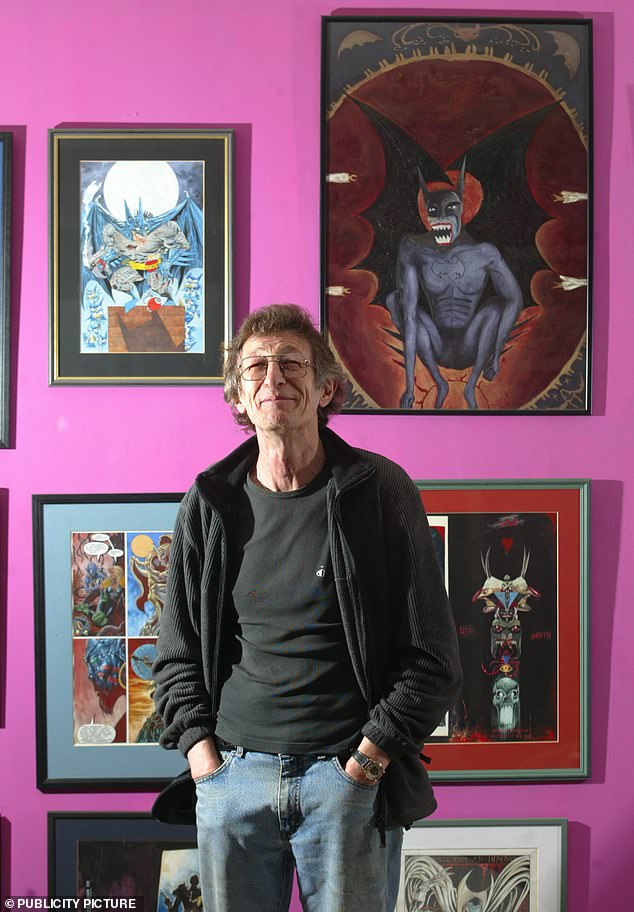 Alan Grant, who today died aged 73 following a long battle with an illness, pictured at his home in Dumfries in 2005 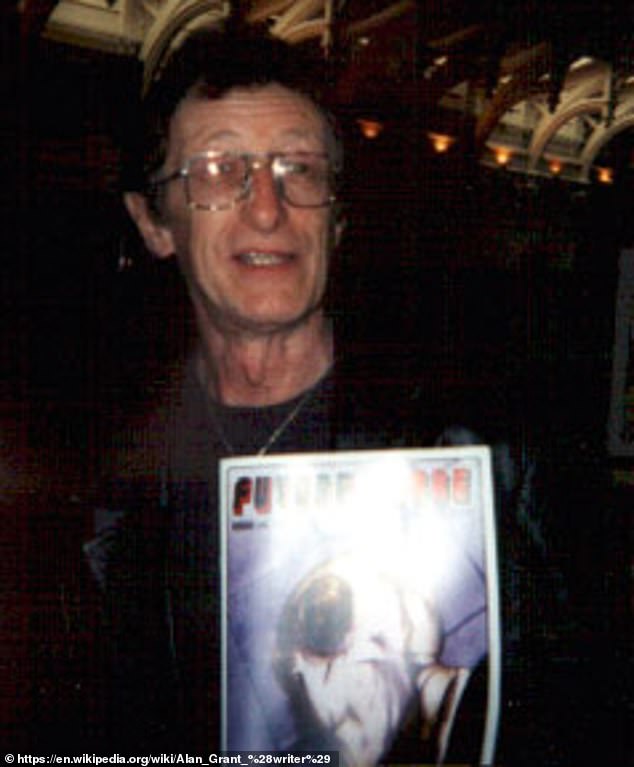 After entering the industry in 1967, Alan rose to prominence with his writing on Batman and the 2000AD series 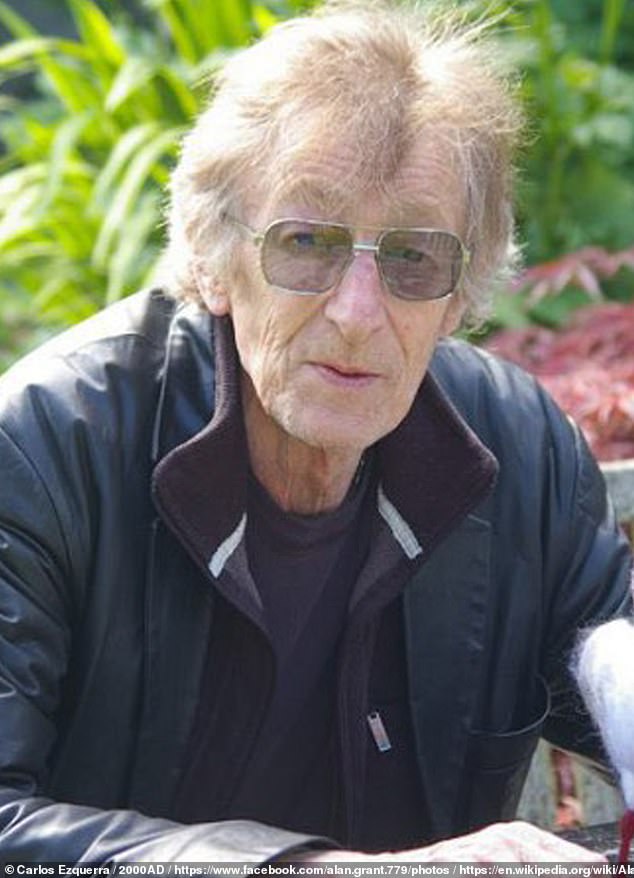 During the pandemic, Alan helped villagers combat the financial impact of Covid by helping them produce their own comic chronicling the their struggles with the virus. 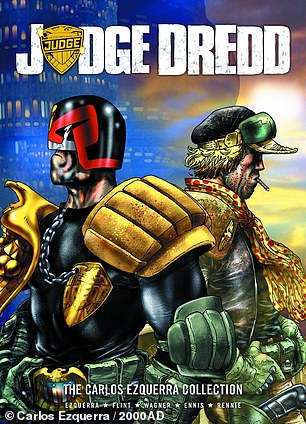 The tribute continued: ‘His impact on comics and standing in the industry simply cannot be understated. But he was more than just a giant in his field – he was a fascinating man whose sharp wit and boundless warmth touched all those who met him.

‘One cannot separate 2000 AD from Alan Grant, his humour, humanity, and intelligence made it what it is, and his talent was integral to its success.

‘We are forever poorer without him. Our deepest condolences go out to his family and his friends. Rest well and thank you, Alan.’

He and his wife also organised much-loved comic festivals in their village of Moniaive in Dumfriesshire for several years.

And during the pandemic, Alan helped villagers combat the financial impact of Covid by helping them produce their own comic chronicling the their struggles with the virus.

The comic was sold to help generate funds for Revitalise Moniaive, which was set up to sustain businesses and boost the village’s economy.

Born in Bristol in 1949 before growing up in Scotland, Alan briefly worked in a bank when he responded to an advert for trainee journalists at his local newspaper.

He subsequently joined Beano publisher DC Thomson, based in Dundee, where he partnered up with John Wagner.

Together, the pair former a long running partnership and revitalised British comics.

While working on the Batman series through the 1980s and 1990s, Alan co-created fictional characters Anarky, Victor Zsasz and the Ventriloquist.

The Scottish Book Trust said today: ‘We are saddened today to learn of Alan Grant’s passing. As a leading star of Scottish comics – and a great ambassador for them – he will be truly missed.

‘Our hearts go out to Alan’s family and friends, and his many, many fans.’

‘Lobo, LEGION, Batman—these books questioned what super hero comics could be and do: they were sharply, cooly cynical and yet oddly—and wonderfully—they contained a powerful, warm undercurrent of hope. Hell of a writer. RIP.’

Writer Richard Newby said: ‘Such a consistently strong writer on Batman and Detective Comics who was behind so many of the stories I grew up reading in the 90s.

‘A foundational voice for many. RIP Alan Grant. We’ve lost too many great ones in the comics industry this year.’

Friend Ivor Davis said: ‘My thoughts are with his wife Sue, first of all, then his extended family, but thousands upon thousands of people the world over will be saddened and shocked as the news ripples out.

‘For, you see, not only was Alan a lovely guy, a pillar of the local community in Moniaive for several years, but also for at least a couple of decades, Alan was THE Batman writer, and, with John Wagner, THE writer on Judge Dredd. He did so so much more too.’

He added: ‘Please take a moment today to think of Sue, and, if you ever read a Judge Dredd Comic Book from the late 70s onwards, or a Batman issue from the late 80s, dig it out or seek out online and revisit the moments of joy Alan A. Grant brought to this world and your life. R.I.P Alan, you were one of a kind.’