Are you going to recycle all that? Environmental activists sit amongst discarded plastic bottles, old shopping bags and single-use coffee cups in Oxford Street shut-down

They have been brought disruption to London for days while campaigning for more to be done to protect the environment from climate change.

But protesters from Extinction Rebellion appear to be less bothered about plastic waste after being spotted surrounded by bottles and coffee cups in central London.

Plastic carrier bags and disposable coffee cups from chain shops are dotted around their bags and blankets in Oxford Circus as well as separate demonstrations in Marble Arch and outside Jeremy Corbyn’s house in Islington.

Single-use plastic has become a huge environmental concern with around 104million tonnes dumped in the natural world every year.

It mainly ends up in oceans, posing a serious threat to wildlife, while less than 20 per cent is believed to be recycled annually. 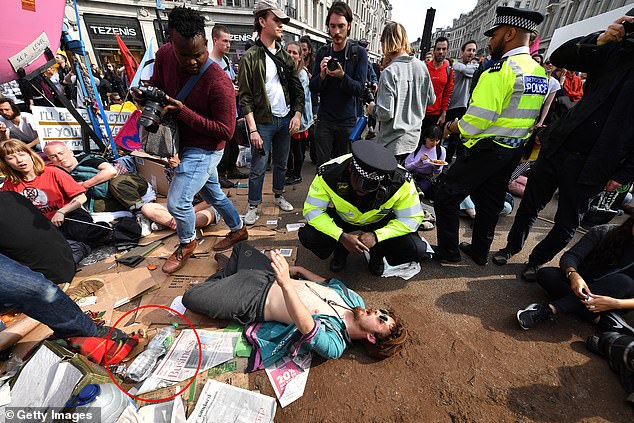 Activists from Extinction Rebellion have been spotted using single-use plastics such as water bottles, ringed, at their protest sites. Pictured are campaigners at Oxford Circus 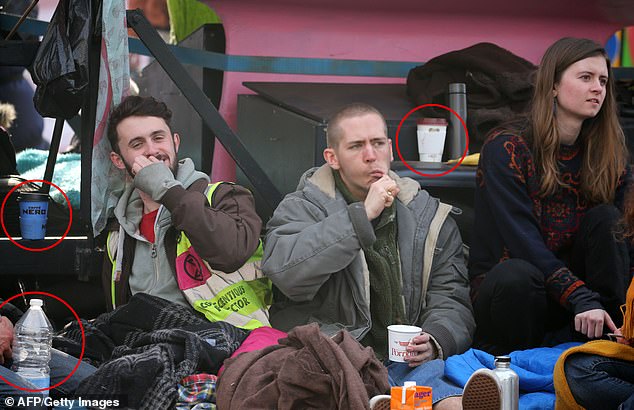 Disposable coffee cups have also been dotted around the Oxford Circus site, pictured, which are very difficult to recycle and are dumped in landfills every year 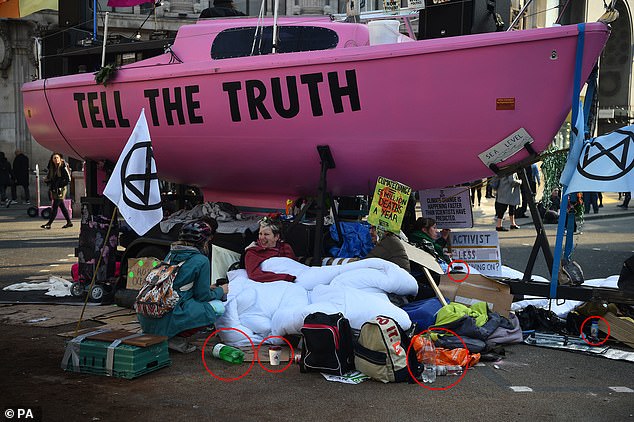 Among their blankets and bags, water bottles and plastic bags can be seen in large numbers, pictured here at the Oxford Circus site by their boat

Experts say just 20 per cent of plastic is being collected for recycling worldwide, while more than half is burned or sent to landfill, raising questions about what the Extinction Rebellion campaigners are doing with their left over bottles and bags.

Charity WWF International says more than 270 animal species have been entangled in plastic debris, which is how at least 1,000 marine turtles die each year.

More than 240 animal species have been found to swallow plastic, which can kill everything from sea birds to whales by blocking their guts so that they die of starvation.

Every minute, more than nine million tons of plastic enter the ocean – the equivalent of 1.4 million half-litre plastic bottles. Potentially four times that amount ends up on the land.

The protest, which is now in its fifth day, has already brought several parts of London to a standstill by blocking four major routes of Waterloo Bridge, Oxford Circus, Marble Arch and Parliament Square. 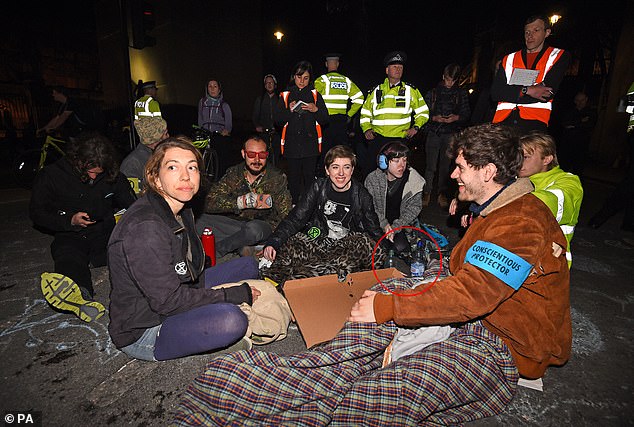 Meanwhile single use plastics have also been spotted at other protest sites including Parliament Square, pictured. Extinction Rebellion has yet to comment 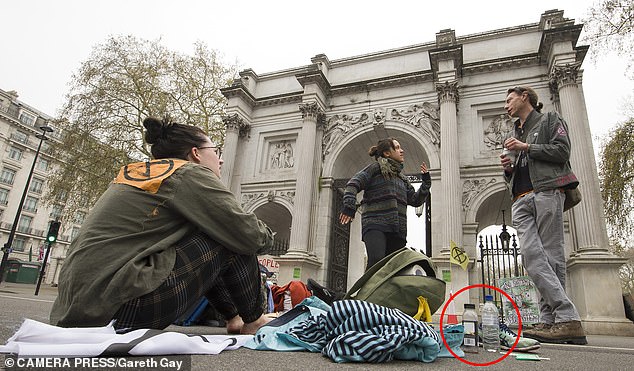 More plastic bottles could be seen with protesters marching from Marble Arch, pictured, to Piccadilly Circus earlier this week 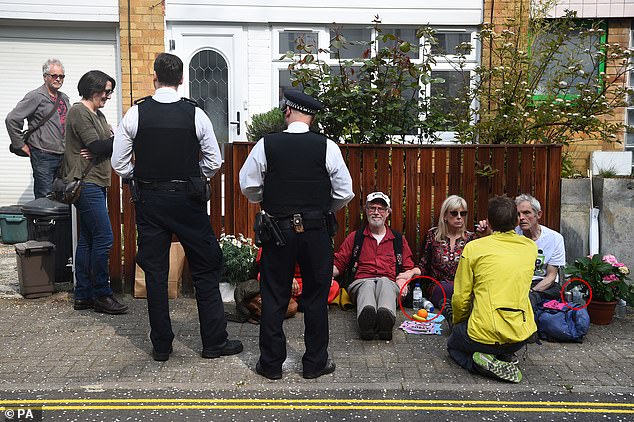 Even the protesters who glued themselves to Jeremy Corbyn’s home in Islington, pictured, brought single use plastic water bottles with them

Today Oscar-winning actress and writer Dame Emma Thompson joined the protests in Oxford Circus and stood atop a pink boat to encourage the activists to continue their efforts.

The Love Actually star added: ‘We have seriously failed them and our planet is in serious trouble, we have much, much less time than we thought.

‘I have seen the evidence for myself and I really care about my children and grandchildren enough to want to be here today to stand with the next generation.’

Dame Emma, whose flight from Los Angeles to London this week generated at least 1.67 tonnes of CO2, said she had wanted to join the protests sooner but it had been her 60th birthday on Monday.

More than 570 protesters have now been arrested as activists continue to ignore orders to leave roadblocks around London. 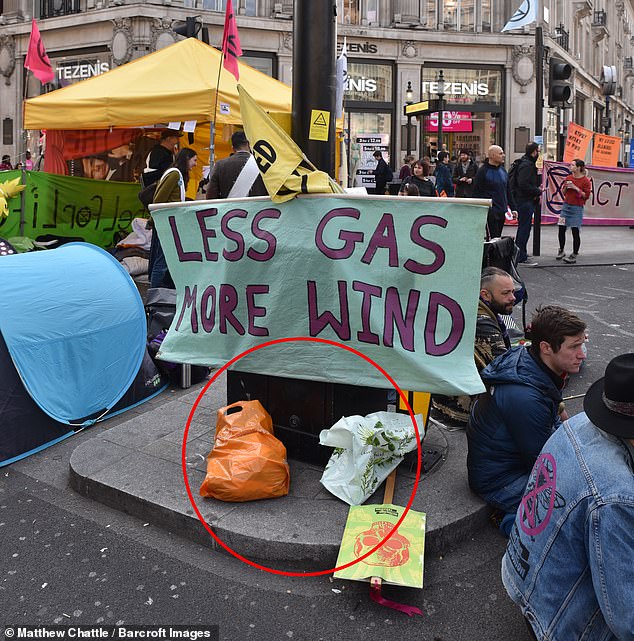 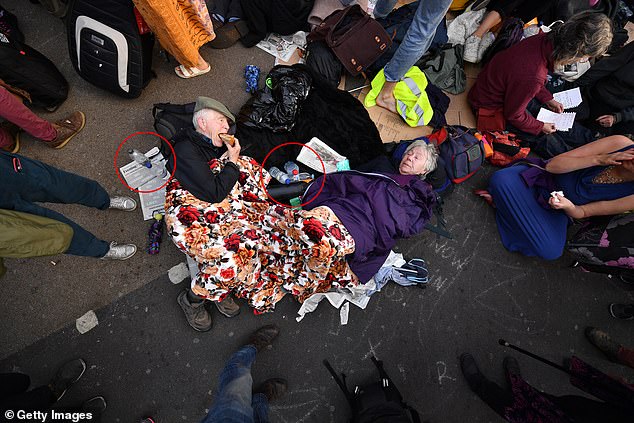 The action also moved to London Heathrow today, although there was no disruption to flights, with about 15 young people unfurling a banner on the pavement outside the transport hub reading: ‘Are we the last generation?’.

Officers told the protesters they were breaking a bylaw by protesting on airport property, and so arrests are expected.

Another girl said: ‘It’s about the message that we’re trying to send, and that is that we are very possibly the last generation and that our futures have been stolen, the lives we thought we would be able to lead have been taken.’

Home Secretary Sajid Javid has urged police to use ‘the full force of the law’ against  Extinction Rebellion protesters.

WHAT COMMITMENTS ARE BIG NAME BRANCHES MAKING TO CUT DOWN ON SINGLE-USE PLASTIC?

Costa Coffee has promised to recycle as many cups as it puts into the market by 2020 and also offers customers a 25p discount on hot beverages if they bring their own reusable cup.

Pret A Manger offers a 50p discount on hot beverages if people bring their own reusable cup.

A spokesperson said: ‘We doubled our discount for customers who bring in their own reusable cup to 50p in January 2018 and, since then, usage has increased almost 20-fold.

‘We now serve over 150,000 drinks in reusable cups every week, and since the discount was doubled, Pret customers have saved over six million paper cups.’ 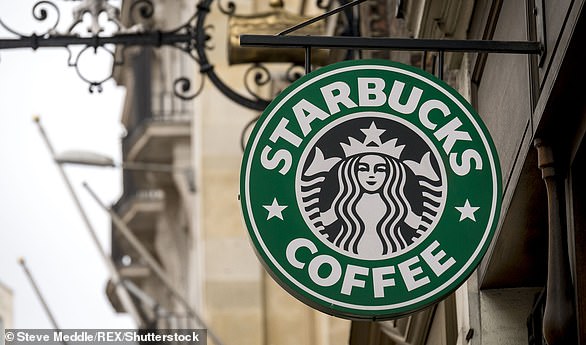 Starbucks offers customers a 25p discount on hot beverages if they bring their own reusable cup.

The chain has announced its London cafes will trial a redesigned cup that will be both recyclable and compostable.

A spokesman said: ‘Our British stores are the first globally to have trialled a 5p charge on takeaway cups.’ He said reusable cup uptake had risen from 1..8% to more than 5% in the past 18 months.

Along with McDonald’s it has invested £10m in firms hoping to design a sustainable alternative to the disposable cup.

Caffè Nero  says that, along with its competitors, it is ‘working to increase the number of [coffee cup] recycling points’ in the UK. It also encourages the use of reusable cups by offering 2 stamps per coffee on its loyalty card.

Caffè Nero, Starbucks, Greggs, McDonald’s UK and Pret A Manger are also involved in a cup recycling scheme that funds the collection of takeaway cups for recycling. 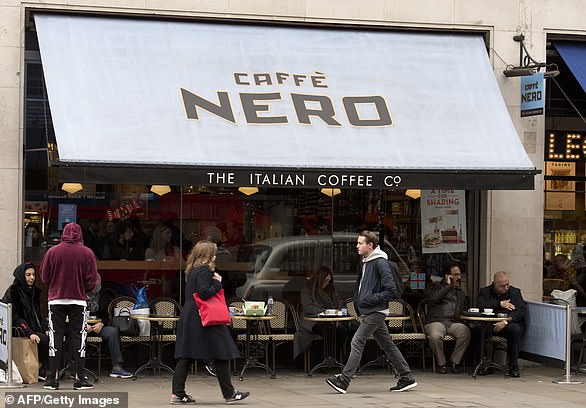 But are they doing enough?

The mixture of plastic and paper in the lining, which is designed to make them leakproof and retain the heat, causes difficulties.

In 2011 a survey by Which? Suggested eight out of 10 people mistakenly believed coffee cups could be recycled.

Many people mistakenly think they can be recycled

2.5 billion coffee cups are thrown away every year. A minuscule 0.25% are recycled.

A shocking 25,000 tonnes of waste a year in landfill

In a statement, he said: ‘Over recent days, commuters trying to earn a living have been unable to travel to work and businesses have been disrupted.

‘Emergency vehicles have faced difficulties navigating the road networks and the demonstrations have put added pressure on police officers whose job it is to solve crimes and protect the public.

‘Let me be clear: I totally condemn any protesters who are stepping outside the boundaries of the law. They have no right to cause misery for the millions of people who are trying to lead their daily lives. Unlawful behaviour will not be tolerated.’ 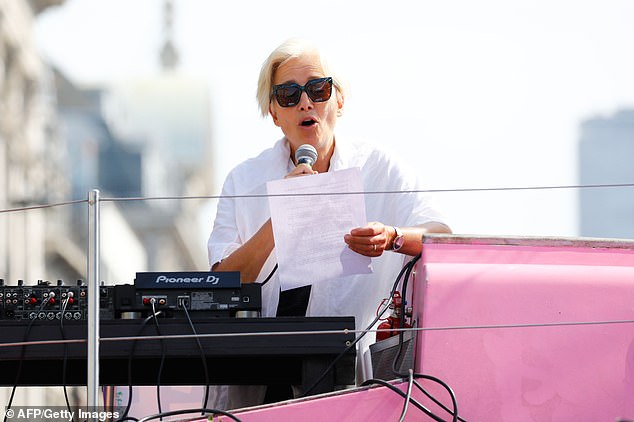 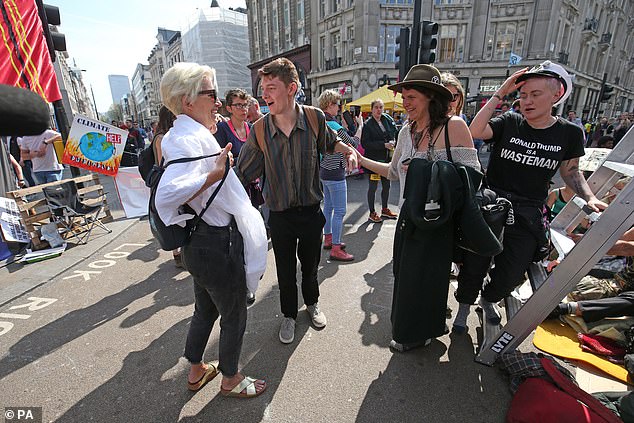 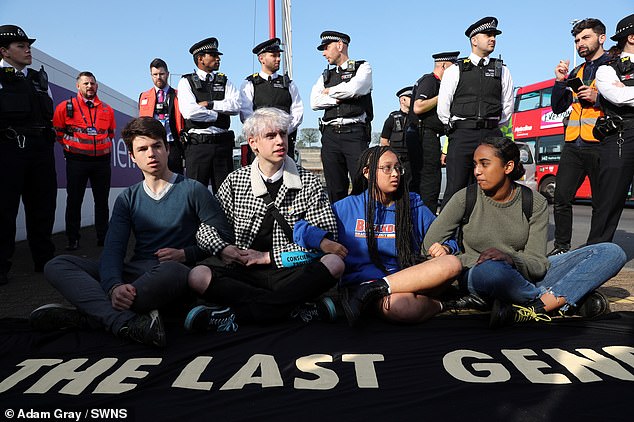 Scotland Yard has warned protesters the force had ‘strong plans’ in place with a significant number of officers ready to respond.

More than 1,000 officers have been deployed daily to deal with the protest.

Some have been asked to work 12-hour shifts, while rest days and leave has been cancelled.

The Met said the protests are putting a strain on policing in the capital with officers diverted away from their ‘core local duties’.

HOW DAMAGING ARE PLASTIC BOTTLES?

Of 30 billion plastic bottles used by UK households each year, only 57 per cent are currently recycled.

With half of these going to landfill, half of all plastic bottles that are recycled go to waste.

This is largely due to plastic wrapping around bottles that are non-recyclable.

Bottles are a major contributor to the increasing amount of plastic waste in the world’s oceans.

Researchers warned eight million tonnes of plastics currently find their way into the ocean every year – the equivalent of one truckload every minute.

The amount of plastic rubbish in the world’s oceans will outweigh fish by 2050 unless the world takes drastic action to further recycle, a report released in 2016 revealed.

At current rates, this will worsen to four truckloads per minute in 2050 and outstrip native life to become the largest mass inhabiting the oceans.

An overwhelming 95 per cent of plastic packaging – worth £65 – £92billion – is lost to the economy after a single use, the Ellen MacArthur Foundation report stated.

And available research estimates that there are more than 150 million tonnes of plastics in the ocean today.

Plastic pollution is ruining the ecosystems of the world, both marine and terrestrial. It litters shorelines, snags animals and suffocates entire populations of animals

So much plastic is dumped into the sea each year that it would fill five carrier bags for every foot of coastline on the planet, scientists have warned.

More than half of the plastic waste that flows into the oceans comes from just five countries: China, Indonesia, Philippines, Vietnam and Sri Lanka.

The only industrialized western country on the list of top 20 plastic polluters is the United States at No. 20.

The US and Europe are not mismanaging their collected waste, so the plastic trash coming from those countries is due to litter, researchers said.

While China is responsible for 2.4 million tons of plastic that makes its way into the ocean, nearly 28 percent of the world total, the United States contributes just 77,000 tons, which is less than one percent, according to the study published in the journal Science.