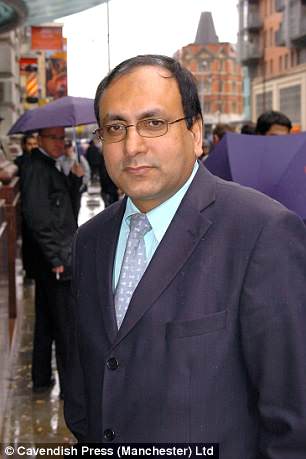 Married father of four Dr Mohammed Tariquezzaman, 55, was accused of sexual misconduct in 2010 when he fondled a 20-year-old woman’s private parts during a consultation

An A&E doctor has finally been struck off following an eight year legal fight after he was found guilty of molesting a college student during a intimate medical examination.

Married father of four Dr Mohammed Tariquezzaman, 55, was accused of sexual misconduct in 2010 when he fondled a 20-year-old woman’s private parts during a consultation.

He twice won legal battles over allegations of wrongdoing but he was hauled before medical watchdogs again after it emerged he told a lawyer to text the patient’s mother offering her £3,000 and a letter of apology on condition the complaints against him were dropped.

At the Medical Practitioners Tribunal Service, he was found guilty of sexually motivated misconduct and has finally been struck off.

The victim, who is now 28 and referred to as Patient A throughout the hearing, revealed how he watched her get undressed in a consulting room before he pulled her knickers down to her thighs and smirked as she said she had a ‘nice body’.

Despite the patient saying she felt uncomfortable as he fondled with her genitals, Tariquezzaman – also known as Dr Zaman – laughed and said: ‘This isn’t the first time this has been done to you.’

The twisted doctor had the audacity to ask for her phone number and offered her free treatment at his private practice, suggesting that they go out for a curry.

At the Manchester hearing, tribunal chairman Richard Kember said: ‘Patient A trusted Dr Zaman to treat her with dignity and respect, and to provide her with appropriate care.

‘But Dr Zaman abused that trust by putting his own concerns above the need of Patient A and by treating the consultation as an opportunity to fulfil his own sexual gratification. This was an episode of serious sexual misconduct.

‘She was the subject of an inappropriate and clinically unnecessary examination which was sexually motivated and harmed her wellbeing. The examination was an abuse of a patient’s trust and conducted to advance Dr Zaman’s sexual gratification.

He added: ‘Dr Zaman dishonestly offered her mother money and an apology in order to induce the withdrawal of complaints and evidence by her and Patient A before the regulator. An apology was never made.’

Mr Kember said Zaman displayed ‘predatory behaviour’ as he wrote Patient A’s telephone number on a urine sample bottle, which he later copied into his mobile phone. The Tribunal found his conduct to be ‘sexually motivated’.

‘Patient A’s evidence that she was experiencing emotional discomfort during the examination and that she had her eyes closed for part of it were credible and had the ring of truth about them,’ Mr Kember added.

‘She gave plausible explanations during her oral evidence to this Tribunal and had been broadly consistent on the essential elements of the incident across all her accounts.’

The incident began when the University College Hospital student suffered from stomach pains in February 2010 when working part-time at a Topshop store.

Tariquezzaman was working as a local senior house officer at the A&E department and told her to get undressed. He failed to offer her a chaperone and touched the outside of her private parts without using gloves.

She complained to police at the time but in December 2011, he was cleared of sexual assault at Blackfriars Crown Court after a healthcare assistant who worked with him claimed she was in the consulting room and saw no wrongdoing.

Tariquezzaman hinted the patient had invented her complaint to ‘deflect attention’ after she got a parking ticket on her mother’s car while at the hospital.

He was struck off in 2014 for misconduct but won a High Court appeal to quash the order after a judge heard she had ‘false memories’ of the incident.

In his evidence Tariquezzaman claimed: ‘I’m being crucified for a sin I have not done at all.’

The most recent hearing was told that between June 2014 and May 2015, a lawyer claiming to act on his behalf sent Patient A’s mother texts for her to withdraw her complaint.

The message read: ‘You need to confirm me soon whether u r willing to settle or not. Please do not waste my time.’

Tariquezzaman, of Manor Park, London, was cleared of sexual misconduct relating to another patient who alleged he had cupped her breast in his hands and stroke it with his thumb during an examination.

The panel were not told of a 2005 misconduct hearing where he was cleared of allegations dating back to 2001 where he allegedly said ‘ooh nice’ while squeezing a patient’s breast while working at a hospital in 2001.

Tariquezzaman won £15,430 damages for racial discrimination after he sued University of London when a job he applied for was offered to another doctor.