The President of Afghanistan said the Taliban should ‘enter serious talks’ with his government, after the United States’ chief negotiator said a peace deal with the insurgents has been agreed ‘in principle’.

The ‘peace framework’ followed six days of meetings between the US and the Taliban in Qatar last week to try to end the 17-year conflict.

US officials told the New York Times that talks between the Taliban and the Afghan government was part of a ‘package deal’ and required in order for a withdrawal of American troops. 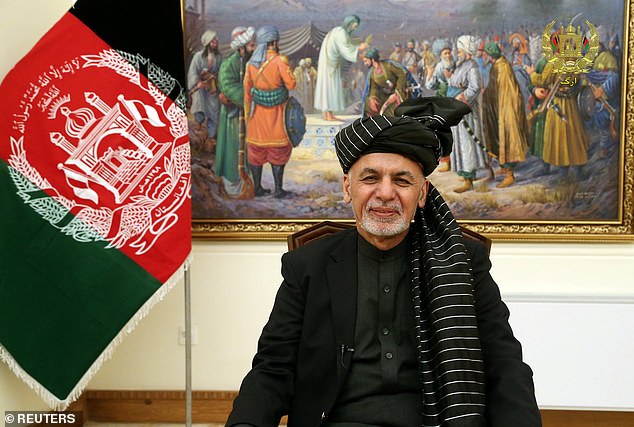 Afghan President Ashraf Ghani said the Taliban should ‘enter serious talks’ with his government, after the US chief negotiator said a peace deal has been agreed ‘in principle’

In a nationally televised address from the presidential palace in Kabul, President Ashraf Ghani called on the Taliban to ‘show their Afghan will, and accept Afghans’ demand for peace, and enter serious talks with the Afghan government.’

Both the Taliban and the US cited ‘progress’ over the weekend as hopes rise that the length of the negotiations could mean a deal may be in sight which paves the way for Afghan talks.

Sticking points remain, with topics including a ceasefire and a timetable for the withdrawal of foreign troops, as well as a prisoner exchange and a guarantee not to allow militant safe havens in Afghanistan believed to have been on the agenda.

But Afghan authorities have previously complained of being excluded from the talks in Qatar, and warned that any deal between the US and the Taliban would require Kabul’s endorsement.

‘We want peace, we want it fast but we want it with a plan,’ Ghani said in his address Monday.

‘We should not forget that the victims of this war are Afghans and the peace process should also be Afghan-led… No Afghan wants foreign troops to remain in their country indefinitely. No Afghan wants to face suicide attacks in hospitals, schools, the mosques, and parks.’ 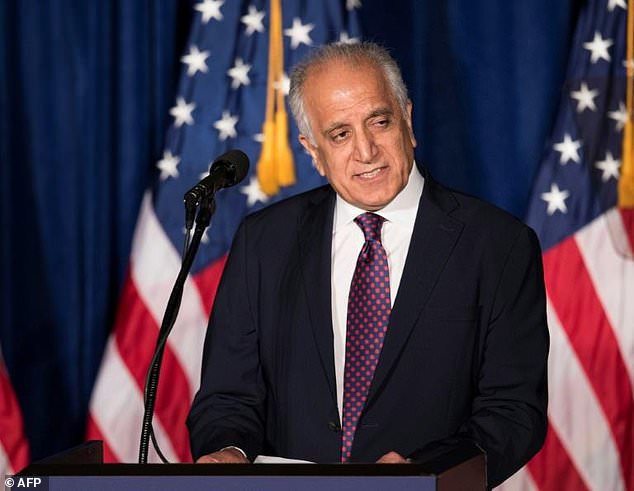 Ghani spoke hours after his office said it has been reassured by Washington that the talks in Qatar remain geared towards bringing the insurgents to the table with Kabul.

US special envoy Zalmay Khalilzad — who has been leading the negotiations — arrived in Afghanistan late Sunday to update officials including Ghani on the progress made.

‘The US insisted in their talks with the Taliban that the only solution for lasting peace in Afghanistan is intra-Afghan talks,’ Khalilzad said, according to a statement released by Ghani’s office.

‘My role is to facilitate’ such talks between the insurgents and Kabul, Khalilzad said according to Ghani, adding that the discussions are ongoing.

The palace said Khalilzad also confirmed that no agreement had been made on the withdrawal of foreign troops, adding that any such decision would be coordinated and discussed in detail with the Afghan government. 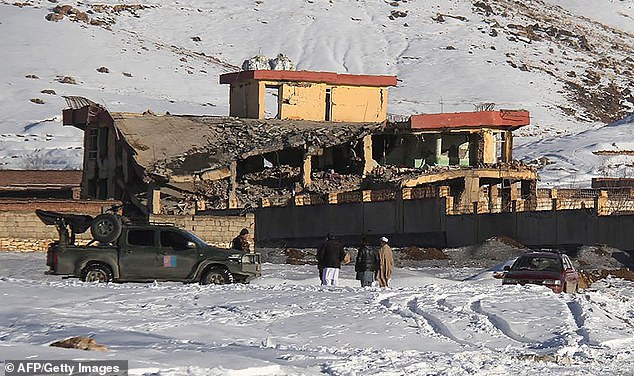 Attacks: The wreckage of a military compound is seen in central Afghanistan last week, where a Taliban car bomb attack killed more than 100 members of the security forces

The Taliban have insisted foreign troops must pull out.

On Saturday Taliban spokesman Zabihullah Mujahid said that until a withdrawal timetable is decided progress on other issues is ‘impossible’.

The palace’s statement said Khalilzad denied reports that the issue of an interim government had been raised, saying that was ‘absolutely wrong’ and there had been no discussions with the Taliban about any future government in Kabul.

He also confirmed there had been no progress on the issue of a ceasefire.

Afghans have expressed tentative hopes about the talks tempered by fears of an American exit, with Afghan security forces taking staggering losses, the government facing election upheaval, and civilians paying a disproportionate price after nearly two decades of bloodshed.

The Taliban and US officials have agreed to continue negotiations, though no date has been publicly announced.