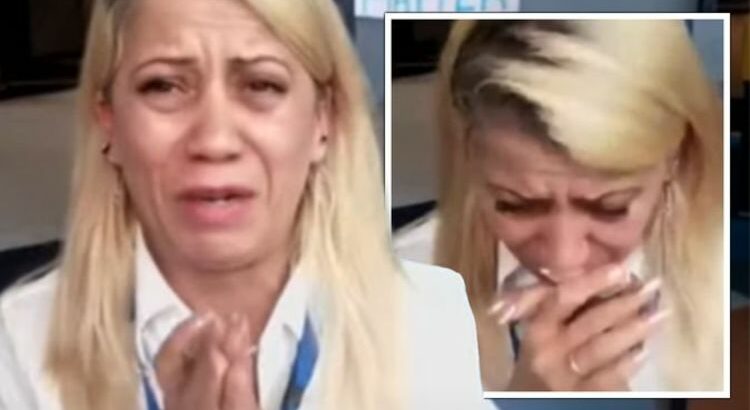 Lailuma Sadid from Brussels Morning Paper was invited to ask NATO Secretary-General Jens Stoltenberg questions about the Taliban takeover of Afghanistan and what would be the next steps for those in the country and the reaction of the international community. But Ms Sadid, filming from an office with a sign in the background reading “Afghan Lives Matter”, became extremely emotional when talking about Afghanistan as she feared for the women still stuck there and the oppression they are assumed to now face. Ms Sadid powered through and demanded to know why the US and the rest of the civilised world were able to defeat fascism but unable to defeat the Taliban.

Mr Stoltenberg told reporters during a press conference that he was “surprised” at the speed at which the Taliban retook control over the country’s provinces and Kabul despite 20 years of US/UK support.

He demanded the Taliban help facilitate the evacuation of anyone who wants to leave the country but a spokesperson for the group has stated they do not want to see anyone leave the country.

The Taliban claim there will be no revenge on anyone who has worked with western or Kabul authorities.

Ms Sadid was invited to ask the NATO chief a question but was awash with emotion.

She said: “I would like to ask, especially about NATO in Afghanistan.

“NATO is not only US, don’t you think that the decision that you and NATO took was wrong.

“How do you respond to that and how many more failed policies will be followed before a workable one will be implemented?

“Because when we saw this situation, as an Afghan woman, like a normal Afghan citizen, you see the situation is really tough.

“And there are thousands of women who really don’t know for the future, what is going on and what should have informed them and they are always asking what does it mean?

“20 years with NATO and the international communities inside Afghanistan and then we are going back again 20 years.

“I would like to ask how is that possible?”

Ms Sadid continued on despite becoming very emotional and attempted to fight back tears.

The journalist added the EU and US were at the “top of civilisation” who historically had defeated fascism and Nazism during the Second World War.

But now, Ms Sadid said despite the power and intelligence of the countries involved in Afghanistan, they were still unable to fight back the Taliban.

She stated: “As a woman, please don’t recognise the emirate Islamic Taliban without any condition like the agreement which is signed between Taliban and the government of Trump and then his following.

Ex-Royal Marine who set up animal charity in Afghanistan hits out [INSIGHT]
PM: No military solution as Taliban close in on Kabul [UPDATE]
Will the UK go to war with Afghanistan? UK has ‘right to intervene’ [REVEAL]

“Please don’t recognise the Taliban and put us in the same situation.”

Mr Stoltenberg sympathised with Ms Sadid and said he had seen progress in Afghanistan for women and would continue to pursue that.

He said: “All these years I’ve been many times in Afghanistan, I met a lot of women [who are] strong leaders with a strong voice.

“And I’ve seen that social and economic progress you have been able to make in Afghanistan over these years.

Many women fear a return to Taliban rule during the 1990s which saw them prevented from going to school, forced to wear burqas, and unable to walk around freely unless with a man.

Business owners who catered to women’s beauty were seen tearing down signs as they feared what the reprisal would be from the Taliban.

Taliban spokesperson Suhail Shaheen told BBC News that women would continue on as normal and would be able to go to school.

However, he said they would still be required to wear certain clothes and stressed there were different outfits they could wear which were not the burqa.

Mr Stoltenberg also told reporters he feared terror would begin to manifest once again in Afghanistan as extremist groups may now find safe refuge in Afghanistan.

UK Parliament has been recalled and will meet on Wednesday to discuss the UK’s plans for Afghanistan.

He told Sky News: “The truth is, across the world people were caught by surprise, I haven’t spoken to an international interlocutor, including countries in the region over the last week, who hasn’t been surprised.

“We saw a very swift change in the dynamics and of course, this has been part and parcel of the withdrawal of western troops, but it’s also been the approach of the Taliban, and of course it’s been a test for the Afghan security forces.”