A new betrayal: More than 150 Afghan translators given sanctuary in the UK are told they face deportation unless they pay £2,400 to the Home Office

Ministers were under further pressure last night to overturn the policy on Afghan interpreters as it emerged scores faced being kicked out of Britain.

More than 150 translators given sanctuary after risking their lives for UK troops said they have been ‘left in limbo’ because of rules that could see them leave as soon as next year.

In a letter to ministers, they said the Home Office had been unable to confirm they will be able to stay after their five-year visas run out.

The interpreters – who all served on the frontline in Helmand Province for more than a year – have to apply to remain in Britain in the same way as migrants who crossed the Channel illegally.

This means they also have to pay almost £2,400 each to stay – a sum they say is unaffordable for many. 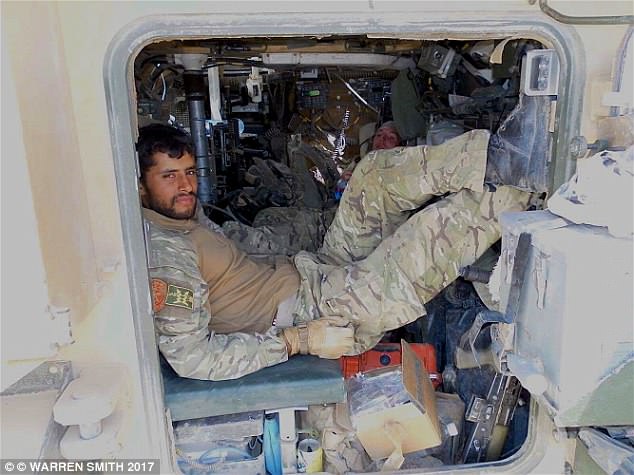 Some have also been told it is too late for them to bring their family over under the same scheme.

It means they face the choice of either returning to the war-ravaged nation, where they fear they could be hunted down by the Taliban for acting as ‘spies’, or living without their wives and children.

They have written to Home Secretary Sajid Javid and Defence Secretary Gavin Williamson calling for an end to the policy.

In a letter seen by the Mail, the interpreters said their ‘future hangs in the balance’ as they are unable to find permanent work because they do not know if they will be kicked out within months.

It says: ‘We took great risk because we believed in the integrity of the British Army, only to be let down by politicians who see us a number and not as people. We implore you to end your shameful and indefensible policy.’

The Defence Secretary last night urged the Home Office to waive the fees faced by Afghan interpreters and to make the process as easy as possible. 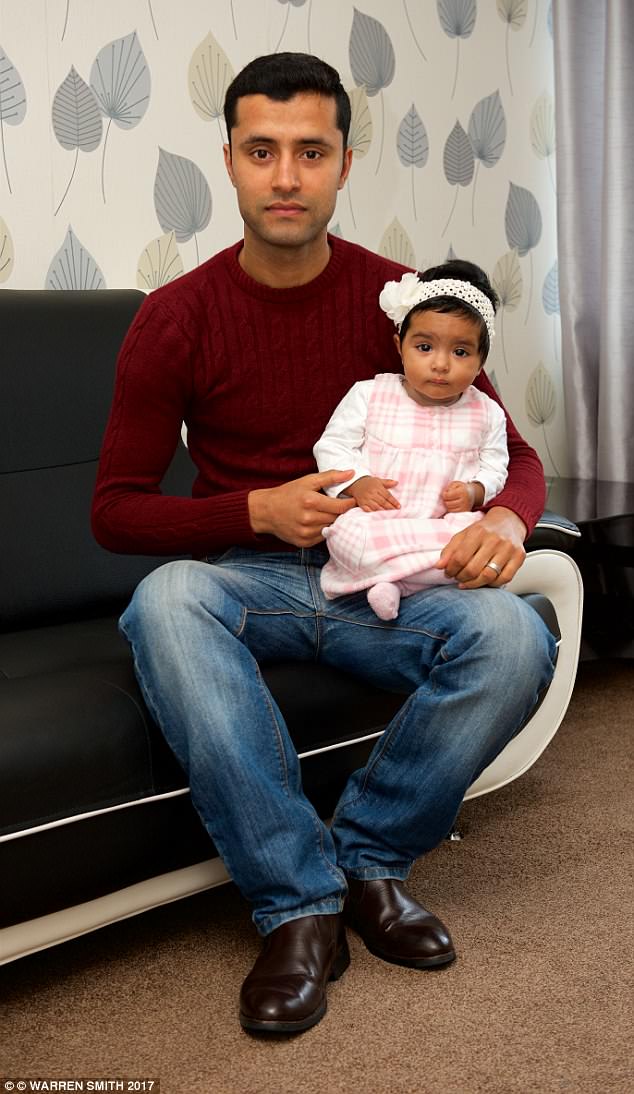 The 27-year-old married father (pictured with his daughter Sineen) said that, as an unarmed civilian, his life was constantly at risk as he interpreted Taliban communications

Several hundred interpreters, including some family members, have been allowed into the UK over the past four years under a ‘relocation’ scheme.

The Ministry of Defence said this policy and a further ‘intimidation’ policy – which has not seen a single interpreter allowed to come to the UK – are in place because of the ‘debt of gratitude we owe’ for their service.

But the interpreters were handed only a five-year residency permit and so, when that expires, will have to apply for indefinite leave to remain like all asylum seekers.

Mohammad Hares, chairman of the Sulha Network, which represents the interpreters, said about 20 have been in the UK since 2014 and will see their permits run out next year.

Mr Hares said some of them had contacted the Home Office asking if they could stay beyond that date and were told to apply under normal immigration rules. 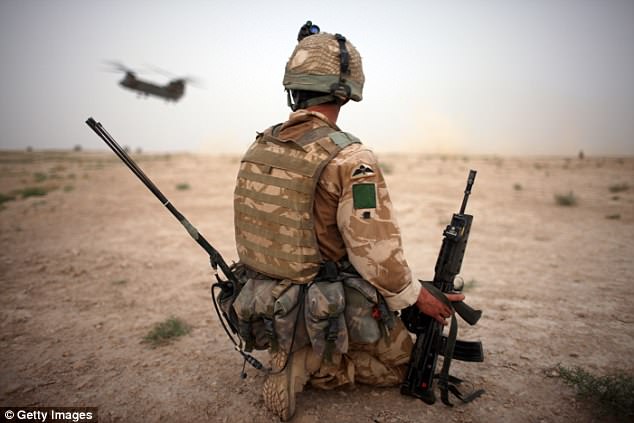 Several hundred interpreters, including some family members, have been allowed into the UK over the past four years under a ‘relocation’ scheme (stock image)

The Government said last night that it wanted to reassure the interpreters they can expect to stay.

During his time with the UK military, Mr Hares was an interpreter for Captain Ed Aitken, who served with the Royal Lancers during two tours of Afghanistan.

Captain Aitken said: ‘The value our interpreters gave us in such an alien environment is difficult to overstate and the trust we put in them to work with us in often horrific conditions was extraordinary.

It makes me feel ashamed that we have made life so difficult for them here. If the public knew quite how much we owed these guys they would be appalled at the way they have been treated.’

Ex-Colonel Simon Diggins, who served in Afghanistan and is helping the interpreters, slammed the ‘scandalous’ policy.

If I take my family back the Taliban could kill us

Mohammad Hares Walizada served in battle with the British Army from 2009 until 2013.

As a battle-group interpreter he deployed on the frontline in dangerous towns in Helmand Province.

The 27-year-old married father said that, as an unarmed civilian, his life was constantly at risk as he interpreted Taliban communications.

In 2013 he was then promoted to a cultural adviser and head of local employees at Camp Bastion in the province, before being made redundant by the Army in September 2014.

He qualified for the Government’s relocation scheme and Mr Hares, who was born in Kabul, said he believed he was allowed into the UK permanently.

But in September 2015 he was given a visa lasting only five years.

He arrived in Britain in January 2016 with his wife, 20, and they live in Manchester with their nine-month-old baby Sineen, while Mr Hares works for a payroll firm.

But, with their visa due to expire in September 2020, he contacted the Home Office to be told he would have to reapply and pay fees of £2,389 each for him and his wife, plus another £900 for his daughter.

He said: ‘If I can’t afford the fees even if I can get a visa then I won’t be able to apply and I will technically be illegal.

‘Then I have two options either to go back to my country and risk our lives or find the money.’

Mr Hares set up the Sulha Network representing interpreters in the same situation with former Captain Ed Aitken, who worked with him in Afghanistan.

Captain Aitken, who met Mr Hares again in Manchester in 2016, said: ‘He told me he was so happy that his daughter was growing up and did not know the sound of the explosions in Kabul.’

He said: ‘The same scandalous hostile immigration policy that has devastated the lives of so many of the Windrush generation has also stopped us from honouring our debt to our former Afghan interpreters.’

Labour’s defence spokesman Nia Griffith has written to Mr Javid asking him to address the issue.

Her letter said: ‘I am sure you would agree with me that these individuals were vital to our Armed Forces’ work in Afghanistan and that this approach risks letting down those who put their lives on the line in support of our forces.’

The relocation policy excludes hundreds of interpreters who worked with British troops during some of the worst of the fighting in Helmand in the years before 2012.

The Mail’s Betrayal of the Brave campaign has revealed how some of these interpreters have made it to the UK illegally, only to be told they will be deported – a policy which led to one killing himself. 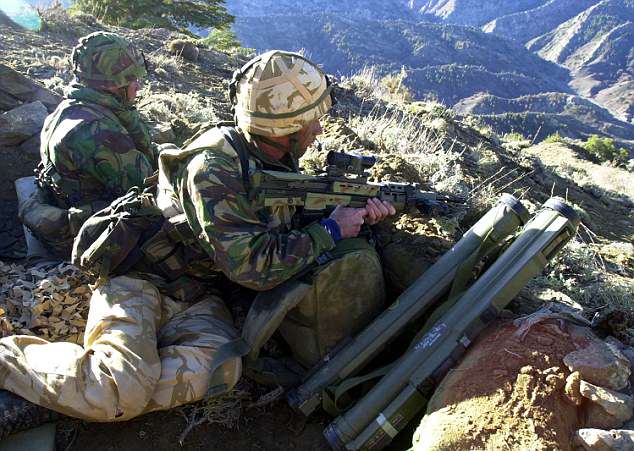 Last week Abdul Bari, 26, who translated for UK forces between 2008 and 2010, said he would be killed by the Taliban if a threat to deport him from Britain was carried out.

He reached the UK in 2015 after being smuggled across the Channel, but has been turned down for asylum. The Government claims it is safe for him to return to the Afghan capital Kabul.

More than 178,000 people, including war heroes and politicians, have signed a petition to allow loyal interpreters into the UK.

A Government spokesman said it did not expect the interpreters to return to Afghanistan and had ‘always been clear’ they could apply to settle permanently.