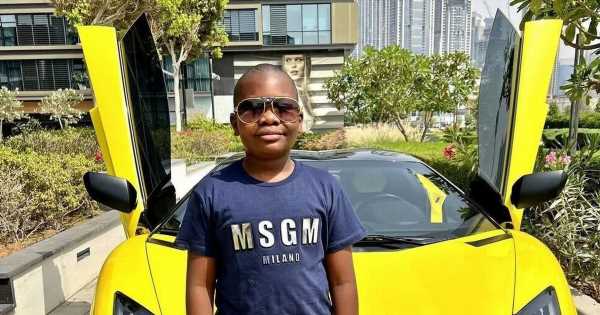 Africa's richest ten-year-old Mompha Junior has posted an audacious photo of his wadds of cash despite his dad technically being on the run for fraud charges.

Muhammed Awal Mustapha is the son of billionaire Ismailia Mustapha who made his fortune by being the chief executive officer of Mompha Burea De Change, Lagos Island.

Young Muhammed goes by the moniker of Mompha Junior on Instagram where he has gained followers flaunting his massive wealth.

But behind the supercars, there are suggestions of darker forces at play.

Ismailia was arrested in January and accused by Nigeria's anti-corruption agency of laundering the equivalent of over £10million.

Local media reported he pleaded not guilty to the charges and was released on bail for £350,000.

However since this Ismailia has failed to appear in court and is now wanted by the Nigerian Economic and Financial Crimes Commission, reports Premium Nigerian Times.

Mustapha is wanted for offences including laundering funds obtained through unlawful activities, false asset declaration and retention of alleged proceeds of crime.

So all in all, it doesn't look too promising for the Mompha gang who own more supercars than most Dubai showrooms.

Mompha Junior, aged just 10, was given his first mansion when he was only six years old and is allegedly worth over £12 million – over six billion in Nigerian Naira, technically making him the youngest member of the world's billionaire club.

In a fresh picture from the family's unknown location, young Mompha posted a picture of two outrageous stacks of US dollars with the caption 'Mompha Life'.

Despite not being able to drive, the young cash baron often poses for his social media followers in front of expensive cars like the Lamborghini Aventador and a cream Bentley Flying Spur.

Then again, not many 10-year-olds own their own houses and Mompha Junior owns a fair few.

After gifting his son his first mansion earlier this year, his father said: "Owning your own home is one of the best feelings ever. It can't be described in words, it can't be quantified in money.

"Home ownership is a feeling that makes life's daily grind worth facing.

"It reassures you that after all the ups and downs you have a place to go to… A place that will never judge you and always invite you with an open arm.

"Congrats my son on your new home. Your birthday gift from Daddy."