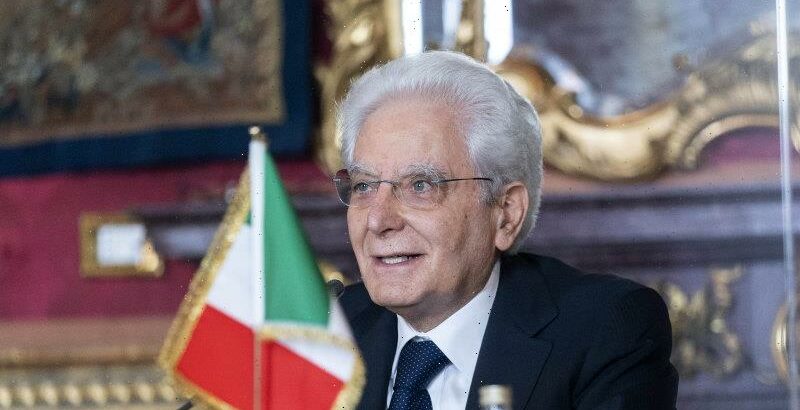 Rome: Italian President Sergio Mattarella, 80, had made it clear he did not want to be reelected. He said he was looking forward to the chance to “rest.” As if to drive home the point, his spokesman last week posted a social media photo of the moving boxes in the presidential palace.

The outcome was a testament to Mattarella himself, a widely respected former constitutional court judge who was recently given a four-minute standing ovation at Milan’s La Scala opera house. 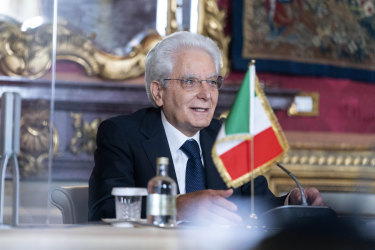 Fulfilling his duty: Sergio Mattarella has been re-elected as President.Credit:AP

But it also reflects a failure among Italy’s weak and divided political parties, which knew of Mattarella’s wishes and were able in theory to consider any citizen 50 or older as his replacement. After a week of backroom deliberations and secret balloting, they couldn’t agree to support a single name.

So, after seven inconclusive rounds of voting, the leaders of Italy’s warring coalition parties on Saturday all but begged Mattarella to come back, asking him to reconsider in the interest of the country. He then handily cleared the majority threshold in Saturday evening’s ballot, winning roughly three-quarters of all votes, and setting himself up for a swearing-in ceremony in the coming days.

After the vote, Mattarella showed his willingness to accept the post once more, saying that the circumstances “dictate that one shouldn’t skirt the duties that one’s called to fulfil.”

“We are asking for a great sacrifice,” said Silvio Berlusconi, the former Italian prime minister, one of the many divisive names who had been floated this month as Mattarella’s successor.

Mattarella’s reelection is a boost for Italy’s short-term stability. The position is often ceremonial, but it becomes highly important in moments of crises – when the president can call for new elections or handpick prime ministers.

Mattarella, during his first seven-year term, used his powers several times, generally to keep Italian democracy from crashing over the guardrails. In 2018, he vetoed the creation of a government with a Euroskeptic finance minister. Last year, after a government collapse, he selected Mario Draghi as prime minister, viewing him as a competent, nonpolitical figure who could rescue Italy amid economic recession and the coronavirus.

Draghi has proved to be a steady hand, and barring the unexpected, he will continue to run the country until next year, when Italy must hold elections. Draghi himself had been a candidate to replace Mattarella, but his odds faded as politicians worried about the task they’d create for themselves if they supported his cause: They’d have to find his replacement as prime minister, and there was nobody with comparable support or clout. His elevation to the presidential palace might have even caused Italy to stumble into early elections. 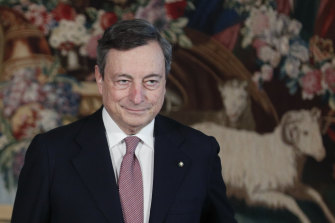 Former prime minister Matteo Renzi, after a week of fruitless negotiations to find Mattarella’s replacement, said on Twitter that keeping Mattarella in the presidential palace and Draghi as leader is the only way “to keep Italy safe from outlandish follies and a lack of political direction.”

But analysts noted that a country that depends solely on two figures isn’t so stable at all, and the negotiations to choose Mattarella’s successor highlighted the fractures.

“This is the best solution – the status quo,” said Roberto D’Alimonte, a political science professor at Luiss Guido Carli University. “But it’s also a solution that reveals the frailty of this political class and a political system that is unable to decide.”

The process to pick an Italian president – conducted with round after round of secret balloting among 1000 grand electors – typically requires some mix of gamesmanship and dealmaking. Entering the voting, which began Monday, neither the right nor left had an outright majority, considering the small pool of independents. But there was still a chance that a unified bloc could ram through a candidate of its choice, if it persuaded some independents or picked away defectors from the other side. 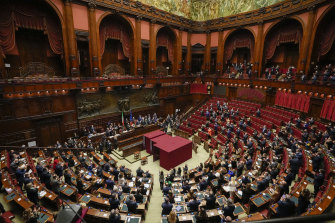 Instead, while backroom talks were slow to gain momentum, politicians cast blank ballots or abstained entirely. The left scarcely tried to suggest names, with some members perhaps preferring Mattarella all along. The right, meantime, floated name after name – a process that only revealed internal divisions.

Analysts said the most damaged figure of the week might be nationalist League party leader Matteo Salvini, who on Friday night had strongly suggested that an unnamed woman would be elected president the following day, a history-making move. But he didn’t have the power to make it happen. By Saturday, he seemed to concede that Mattarella was the only option.

Mattarella, a Sicilian, had been a longtime government figure before being elected to the Constitutional Court in 2011. His older brother, Piersanti, a Sicilian governor, was killed by the mafia in 1980. Mattarella had been chosen as president in 2015, after Giorgio Napolitano stepped down in the midst of his second term. Napolitano had been Italy’s first multi-term president, and his reelection had stemmed from a similar impasse, with bickering parties unable to find his replacement. In his re-inauguration speech, Napolitano castigated the country’s political players.

Mattarella is now fully entitled to serve out his next term, at which point he’ll be 87. But speculation is rife that he might step down beforehand, perhaps some time after the next elections. That could pave the way for Draghi – depending on his luck in a country where political fortunes can rise and fall with astonishing speed.

Draghi, Europe’s former top central banker, has hinted that he covets the job. And as recently as a week ago, he was the favorite to replace Mattarella.

Before the presidential elections, Draghi’s government had been operating smoothly. He’d improved investor confidence and revamped Italy’s plan for how to use its massive European recovery fund stimulus. He had imposed rigid coronavirus vaccination rules with minimal political blowback – all while pushing Italy to become one of the most highly vaccinated countries in Europe. Draghi also boosted Italians’ pride in their own government, which they have long associated with volatility and chaos.

But analysts say the divisions that broke into the open this week will make governing harder over the next year. Parties have a growing incentive to shift into election mode and differentiate themselves.

“The whole political system, and especially the six parties part of the ruling coalition, have miserably failed the presidential election test,” Wolfango Piccoli, co-president of the Teneo consultancy firm, wrote Saturday in a note. “The whole presidential saga has highlighted that trust within the ruling coalition has been broken and rebuilding it with only a year left before the next election will be a near-impossible job.”