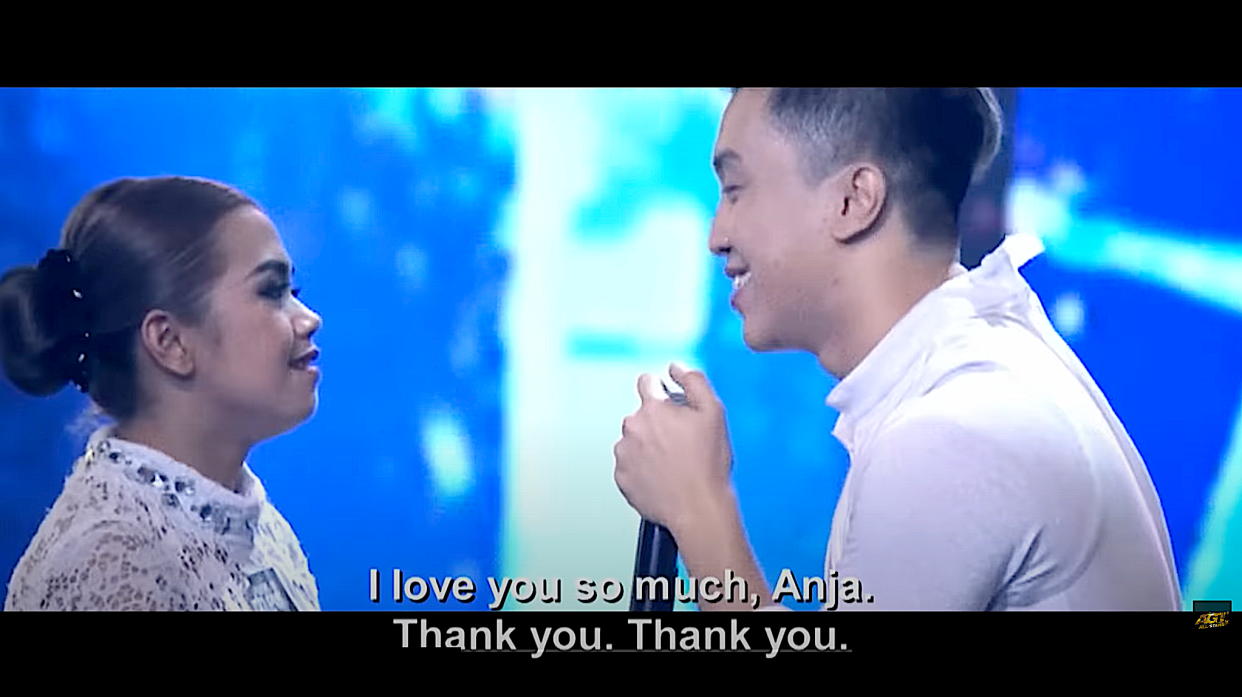 There have been a few talent-competition couples whose onstage declarations of love have made for pure TV gold. There was that moment on American Idol Season 16 when winner Maddie Poppe and runner-up Caleb Lee Hutchinson announced that they were an item, or that time when Season 5 AmericanIdol finalist Ace Young got down on one knee and proposed to another Idol alumnus, Diana DeGarmo, on a live Idol finale. And of course, there's power couple Blake Shelton and Gwen Stefani's blossoming romance on the set of The Voice.

But when it comes to power coupes, there may be no cuter meet-cute TV talent show love story than that of aerial act Power Duo, who competed on of America’s Got Talent: All-Stars this week — and won not just a place in the All-Stars final, but in America’s hearts.

When Pilipinas Got Talent champions Anjanette and Gervin appeared on All-Stars Monday, they admitted that the chemistry they clearly share onstage didn’t always translate offstage. After being paired up by a dance teacher as kids, at first they “always argued” and “didn’t understand each other” — but then, as they continued with their training, “Our connection became more intense,” Gervin admitted with a big grin.

By the time their budding partnership led them to Pilipinas Got Talent in 2016, Gervin had caught so many feels that decided to shoot his shot on live TV — a risk perhaps more nerve-wracking than any of the stunts in Power Duo’s acrobatic act, since he had no idea if his professional partner felt the same way. “He didn’t know that I loved him first,” Anjanette said sweetly, as the couple shared their wholesome story with the judges.

“I confessed something to her,” Gervin recalled, as archival footage of their iconic romantic moment ran onscreen. In the flashback, one of the Pilipinas Got Talent judges asked Gervin if he had a girlfriend; he blushed and said, “I’m courting her,” gesturing towards Anjanette, before telling his partner, “I love you so much, Anja.” Anjanette gushingly replied, “You just don’t know — I’m falling for you too!” The crushed-out couple embraced and then jumped up and down, victoriously, as if it were already finale night, while the audience erupted and one of the PGT judges even slammed his Golden Buzzer button in approval. The full moment can be seen around the 6:30 mark in the compilation of sizzling PGT footage below:

“The night before the finals, we kissed — and we won the show!” Anjanette giggled Monday, still giddy nearly seven years later. The two have since gotten married and now have a 1-year-old son, so they’re already living the dream in their personal lives, but they came to All-Stars because it’s their profesisonal dream to headline a show in Vegas. “She’s the reason I keep on dreaming,” Gervin said of his wife. “And I love her so much.”

After their elegant and swooningly sexy routine to Calum Scott and Leona Lewis’s “You Are the Reason,” a song that Gervin dedicated to Anjanette, even the usually crabby Simon Cowell was smitten with Power Duo. “I love you two!” he proclaimed. However, only two of this week’s 10 “best of the best” alumni would advance to finals — one selected by an elite group of “superfans,” and another chosen via Golden Buzzer by one of the judges — and this week, the Golden Buzzer power lay in the manicured hands of Heidi Klum.

Heidi didn’t use her buzzer on Power Duo, explaining that she didn’t want to pounce too early when nine other acts had yet to take the stage. Instead, she saved her Golden Buzzer for 13-year-old Irish magician Aidan McCann, a lovable 2020 finalist from Britain’s Got Talent that Simon described as a real-life Harry Potter and Heidi called “such a little star.”

However, still love won the day. In a bit of an upset, Philippines’ sweethearts ended up clinching the superfans’ vote — ousting America’s Got Talent Season 14’s South African choral group Ndlovu Youth Choir, who the judges clearly thought were the night’s shoo-ins. (Howie Mandel even said they were his favorite choir in AGT history.) But even though Power Duo did make a minor mistake during their routine that the eagle-eyed Howie pointed out, and even though they were an international act that didn’t presumably have a large fanbase in the U.S., the panel should never have underestimated the power of Power Duo’s universal love story. Most American viewers were hearing that story for the first time, and I think that actually helped the couple.

Interestingly, now, after four weeks of AGT: All-Stars, there are still no solo singers headed to the final, even though Got Talent is often dominated by that type of contestant. (Seven of the winners of the past 17 regular seasons have been solo vocalists, and other singers to break out from the franchise include Jackie Evancho, Jake Wesley Rogers, and BGT sensation Susan Boyle.) With All-Stars being such a competitive spinoff series, talented belters like Jimmie Herrod, Caly Bevier, Jeanick Fournier, Keren Montero, and Sara James have already gone home after performing only once. And the promising belters who were passed over this week — and didn’t even make into the superfans’ top three — were Season 14’s 68-year-old blues dynamo Robert Finley (despite delivering such a fantastic performance that Simon said he wished he'd been able to use a “Platinum Buzzer” on Robert, marveling, “You’re just so cool. … That’s what a singing voice should sound like!”) and 2020 third-place finalist Cristina Rae. Cristina was actually Heidi’s Golden Buzzer pick in AGT Season 15; however, this time around, Heidi claimed she didn’t use her Golden Buzzer on Cristina, who performed second Monday, because she was certain that the diva wouldn’t need it. Heidi was wrong.

As for the one other musical act that competed this week, Season 9’s self-declared rock ‘n’ roll cellists Emil & Dariel, they had pretty much zero chance of making it, because they just didn’t rock their “Take on Me” cover hard enough. “You’re really talented, but you’re both really boring,” Simon told them flatly — and he wasn’t wrong. So, this means that the only musical All-Stars acts, of any genre or specialty, that have advanced thus far are the Detroit Youth Choir and saxophonist Avery Dixon.

However, there are still a few fan-favorite singing alumni who have yet to perform, like Season 15’s Archie Williams and Daneliya Tuleshova, and most notably beloved Season 14 champion Kodi Lee, so watch this space. In the meantime, congratulations to Power Duo, who have already won at life (and on Pilipinas Got Talent, of course), no matter what happens next.

· Why 'Idol' winner Maddie Poppe wants a 'do-over' of duet with boyfriend Caleb Lee Hutchinson: 'I was so awkward'

· 'AGT' all-stars Tone the Chiefrocca, Aidan Bryant return to settle the score: 'I want to win so bad, and I'm here to prove it'

· One of reality TV’s all-time biggest successes cut in early 'AGT: All-Stars' shocker: 'I would have never guessed that'