For two decades, Simon Cowell has judged singers of all genres on American Idol, The X Factor and Britain’s Got Talent. But it took 17 seasons of America’s Got Talent for Simon to find the “perfect contestant”: himself. Or, at least, an extremely eerie facsimile of himself.

On Tuesday, at the end of AGT Season 17’s second auditions episode, two men representing a new company called MetaPhysic Synthetic Media (which is touted on its website as “building the hyperreal metaverse” and creating “AI-generated content and web3 infrastructure to create a hyperreal metaverse owned by users”) mysteriously appeared. “We use artificial intelligence to create hyperreal content. And so we’re going to invite our good friend Daniel Emmet onstage, who you guys are familiar with from a previous season,” they announced.

That’s when Daniel, an opera singer who made the AGT top 10 as a wild card in Season 13, came out wearing the sort of open-throated white button-down that Simon often wears. “When they asked me to be a part of this wonderful, unique, original thing they’re going to do, I couldn’t say no,” he explained. Daniel proceeded to belt out an earnest rendition of Chicago’s syrupy love ballad “You’re the Inspiration” — but now his voice was booming from the creepy robot mouth of the white-shirted, artificially intelligent Simon Cowell on the giant screen behind him.

At first, Simon seemed thoroughly horrified by this MetaPhysical, Max Headroom-like spectacle, peeking warily at his “performance” through his fingers; it was hilarious to witness this reaction, after years of Simon often harshly judging other flesh-and-blood vocalists on national television. But of course, Simon quickly warmed to his android alter-ego, and by the end of the deepfake performance, the egomaniacal judge was deeply in love.

“Whoever said is there’s no such a thing as a perfect contestant — a great singer who looks incredible — we just found him,” Simon declared, as he locked eyes with his waxen-faced, dead-eyed VR self. “Is it inappropriate to fall in love with a contestant? I know it’s strange… but I love you, Daniel.”

Simon’s fellow judges also seemed to think the VR Simon was even better than the real thing. “Honestly, this was the best thing I’ve seen all day. And because of you, I’m going to get five more wrinkles, because I was laughing so much,” said Heidi Klum.

Sofia Vergara even threw some shade at her real-life costar, saying, “I cannot even imagine the amount of work to be able to create something so perfect, because if I was not paying attention and I see this, to me, I think it’s Simon, 20 years ago, singing!” 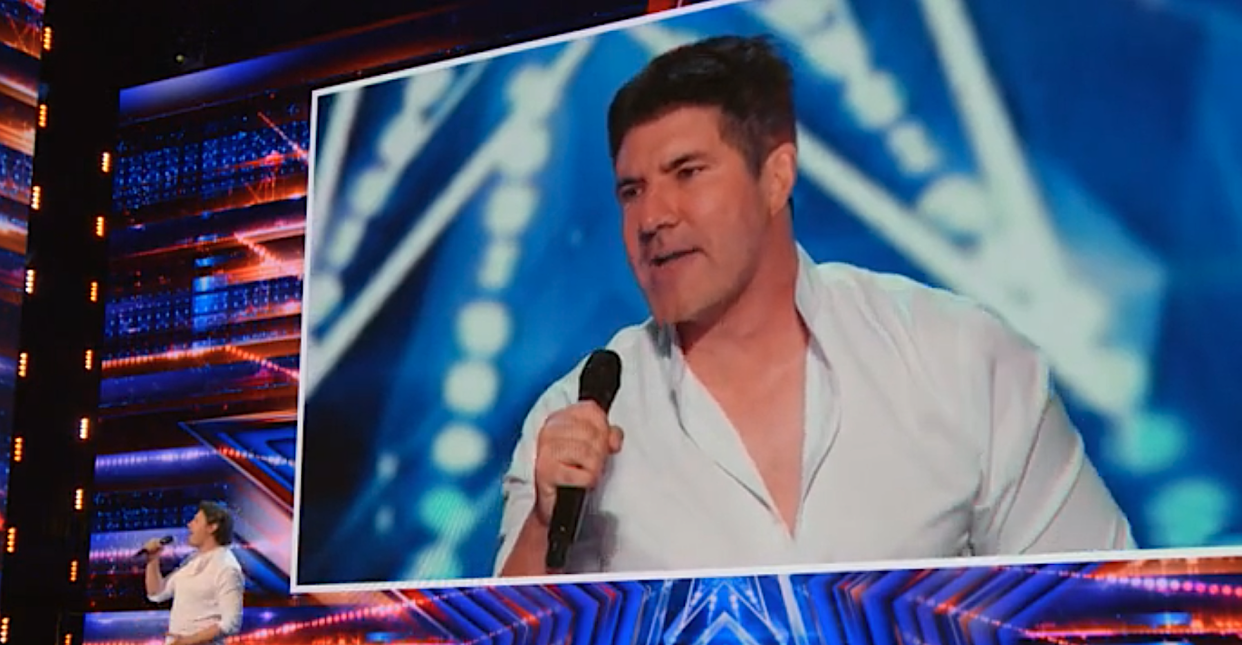 It remains to be seen if the fake, ageless singing Simon can compete against the real-life vocalists who auditioned this week, like 11-year-old former Game of Talents contestant Madison Taylor Baez (who earned judge Howie Mandel’s Golden Buzzer) or former American Idol country contestant Drake Milligan. There was even a troupe of musical chickens, brilliantly named the Bock and Roll Band, that was the real deal. But if MetaPhysic Synthetic Media doesn’t win America’s Got Talent, maybe the company can work on its own sort of “Simon & Simon” spinoff show — because the real Cowell and faux Cowell certainly make for good TV.