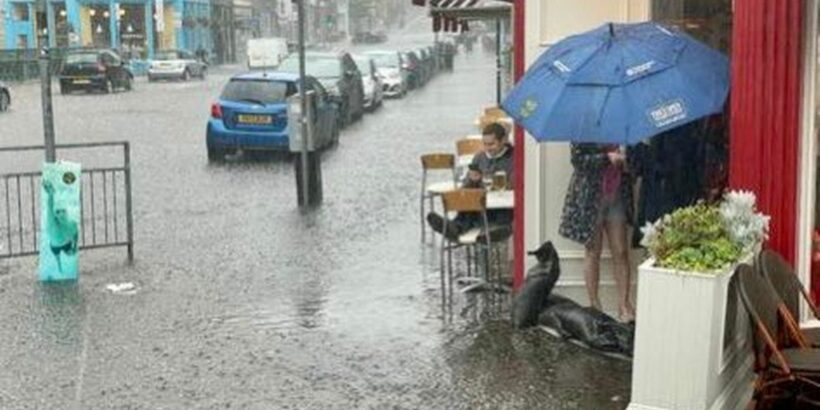 Much of Britain has been battered by heavy rain and downpours over the last few days causing misery for many.

Staycation is the word of the summer but sadly the sunshine has not backed up the enthusiasm of thousands of Brits.

However one Glasgow diner is determined that the rain will not spoil his summer this year – even as the heavens opened up around him.

Summoning his best courageous Braveheart impression the "al fresco" diner was photographed outside Eusebi's Deli, in the city’s west end, tucking into a spaghetti as torrential rain fell and the street flooded with water

The hardy Glaswegian was snapped sitting in the middle of a thunderstorm by the deli and posted on social media.

In the Tweet Eusebi's Deli wrote: "What flooding ? The gent seated ordered a plate of spaghetti Vongole , a moretti & dessert . Only in Glasgow"

In the photo the man appears to be casually looking at his phone with his legs outstretched on the chair opposite him.

Two other people can be seen hiding in the corner of a building under a large blue umbrella seeking refuge.

The man was widely applauded on social media with many celebrating the man's bravery in the face of appalling weather.

One admirer replied to the post, and wrote: "Well the bloke at the table is stoically sitting there with his beer. Fortitude".

Another commented: "I mean I like a nice pint of Moretti too but this man is really committed…"

Another joked: "He has excellent taste .. and al fresco dining in Glasgow always means a dash of rainwater".

Another proudly added: "Brilliant. Love it. Only Glasgow".