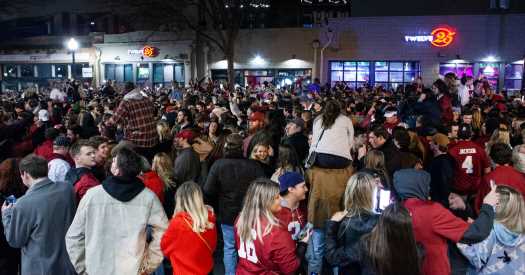 About 5,000 football fans packed a popular boulevard in Tuscaloosa after the University of Alabama won its 18th college football national championship on Monday night, ignoring the city’s pleas before the game to stay home and inflaming worries about an influx of coronavirus cases in a city already straining to contain the pandemic.

The scene on the street of bars and restaurants known as the Strip was precisely what health officials wanted to avoid after the Crimson Tide routed Ohio State, 52-24. Fans, many not wearing masks, could be seen bumping into one another, tossing beer bottles and reveling as if the pandemic did not exist.

Mayor Walt Maddox of Tuscaloosa said 14 people were arrested after fights broke out in the crowd.

The city reached a critical point in the pandemic, Maddox said last week, with just four intensive care unit rooms available at the city’s main hospital and a police force limited to about 69 percent because of the number of officers who had either contracted or been exposed to the virus.

The city had urged fans to not create a “block party environment” if Alabama won. Cases in Alabama had already increased 30 percent over the past week compared to two weeks ago, according to a New York Times database.

Now, health officials are preparing for a post-championship spike.

“A surge on top of a surge, like most places in the country, can have devastating consequences,” Maddox said.