Moody’s age reflects the aging of death row across the US, where almost 3,000 people are to be executed. 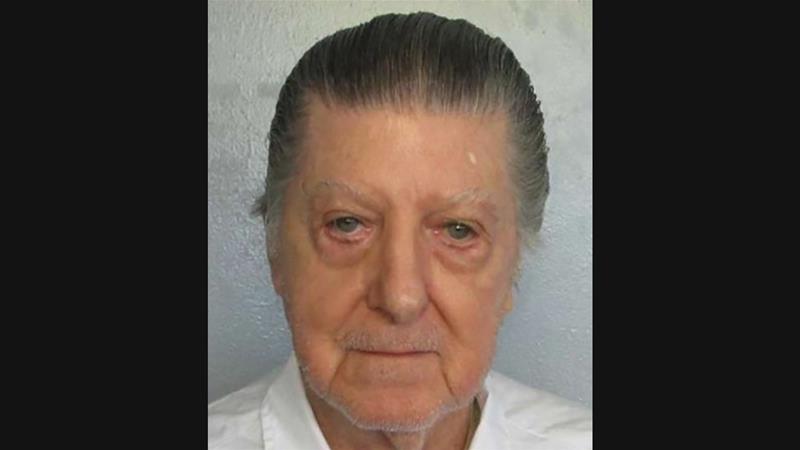 Alabama has executed Walter Moody Jr, the oldest inmate killed in the modern history of the US, according to the Death Penalty Information Center (DPIC), a group that tracks capital punishment.

Moody was put to death at a correctional facility in Atmore, Alabama, on Thursday evening. The condemned reportedly did not make a last statement before his death.

Though reports listed Moody’s age as both 82 and 83, Bob Horton, the Alabama Department of Corrections public information officer, confirmed to Al Jazeera that Moody’s age is 83 on Wednesday.

Moody was convicted in 1991 of 71 charges related to the 1989 pipe-bomb deaths of federal appeals judge Robert Vance and civil rights lawyer Robert Robinson. Moody has maintained his innocence.

The Supreme Court of the United States (SCOTUS) declined to review Moody’s case in January. An appeals court further denied relief for Moody on Wednesday.

Moody appealed to SCOTUS again on Thursday and a short stay of execution was issued but then quickly dissolved. The oldest US inmate to face the death penalty in the modern era was pronounced dead at 8:42 pm, local time.

Alabama Attorney General Steve Marshall said in a statement that “Moody’s appeals finally came to a rightful end. Justice has been served.”

Executions were blocked by SCOTUS in 1972, but the court reinstated the death penalty in 1976 after placing “stricter standards for the constitutionality of capital punishment”, Robert Dunham, the DPIC’s director, told Al Jazeera.

“Nobody aged 80 or older has been executed since executions resumed in the 1970s,” which is considered the modern era of capital punishment in the US, Dunham said.

These stricter standards included guaranteeing deaths that were not “cruel and unusual,” as prohibited in the US Constitution, as well as a mandating that a jury decide to impose the death penalty, among other measures.

Though the number of executions is declining in the US, Moody’s age is indicative of the aging population of the roughly 2,800 people on death row, the DPIC director continued.

“Nine people in their 70s” have been executed in the US since capital punishment was reinstated, Dunham said, and all of them died in the 21st century.

“When we look at people who have been executed before 2000 in the modern era, no one in their 70s or 80s” has been executed, he said.

The previous oldest person to be executed was John Nixon, 77, who died in Mississippi in 2006.

Though many believe the lengthy appeals process is to blame for the ageing population, Dunham explained that the “primary reason” for the advancing age of death row inmates is that the convicted “typically … had their convictions or death sentences overturned several times and have been resentenced.”

It can take up to 20 years for a case to be overturned. The case could take another 15 years after that to work its way through the system, Dunham said.

Often, appeals are filed that claim death row inmates were not properly represented or evidence was not presented in previous trials – which can cause a new trial – or are suffering from mental illness or impairment, which bars them from execution, if proven.

Arkansas scheduled eight executions in 11 days in 2017, an unprecedented even in US history. Four of the eight men had their executions stayed due to appeals such as those listed above.

The execution blitz was scheduled because Arkansas’ supply of midazolam, a drug meant to cause unconsciousness as part of the state’s three-drug lethal injection protocol, was about to expire.

Officials feared expired drugs would increase the risk of “botched,” or painful executions.

Four of the eight inmates were ultimately executed in Arkansas. Witnesses recounted one of the inmates, 52-year-old Jack Harold Jones, gulping and gasping for air during the exeuction.

The lawyer of Kenneth Williams, another of the four inmates executed, called his death “horrifying”. Williams reportedly coughed and convulsded as he died, which could possibly signify a botched execution.

Midazolam was administered in at least four botched executions since 2014, according to the DPIC.

According to Maya Foa, director of UK-based rights group Reprieve that has campaigned against the death penalty globally, there was reason to fear a botched execution for Moody.

Putting to death an 83-year-old made the “the risk of the lethal injection failing even higher, especially when the Department of Corrections plans to use a drug that has been at the center of flawed executions in every single state that has used it.”

But concerns are not limited to the circumstances surrounding Moody’s execution, Foa said.

“Half of all executions carried out in the United States so far this year have gone visibly wrong,” the Reprieve director continued. “Alabama itself had to stop the first execution it attempted because it was going so horribly.”

Alabama attempted to execute convicted murderer Doyle Hamm in February but aborted the attempt after executioners could not find a usable vein for the needle. Hamm, a cancer patient, had argued previous to the execution that his veins were too damaged.

Hamm’s lawyer, Bernard Court, said in a March press release that Alabama has agreed not to set another execution date for the inmate.

Motive for the killings

According to local media reports, prosecutors originally thought the killings of Vance and Robinson, who was African American, were racially motivated.

They later alleged that Moody was angry at the court system over a 1972 conviction for another bombing incident that injured his then-wife.

He allegedly hoped the suspicion of racist motivations in the bombings would confuse investigators.

Bob Vance, son of the assassinated judge who is also a judge himself, was quoted in local media as saying there “wasn’t any real good reason” for Moody’s targeting of his father.

Vance’s family does not plan to attend Moody’s execution. Bob told local media he got “closure” when Moody was convicted in 1991, realising he “would never be in the position to hurt anyone else.

“The execution coming up … doesn’t add anything to that,” Vance said.