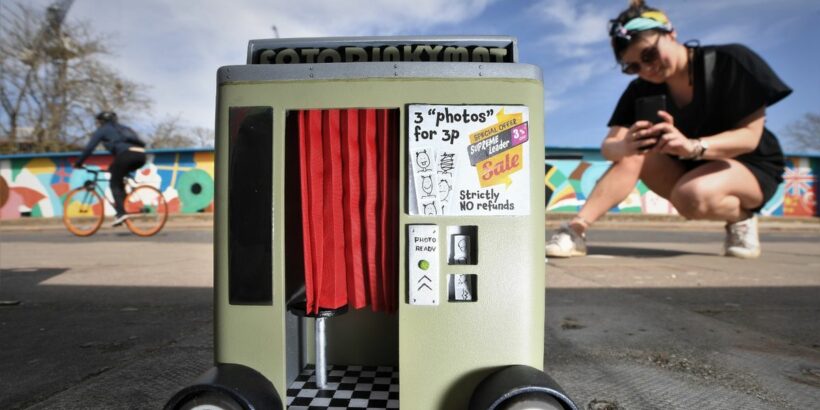 Aliens have been invited to a tiny photobooth that appeared overnight on a bridge in Cambridge.

The mysterious street-art was signed by the city's UFO-loving answer to Banksy known as Dinky Doors.

It was installed on Mill Road bridge in the early hours of Tuesday morning with anonymous claims about finding a 'Supreme Leader' and saving the world.

Dinky Doors told the Cambridge Independent: “We’re sure they will need to update their passport photo. That’s why we have created the Fotodinkymat for them. Hopefully they will give us some new instructions on saving the world.”

The artists have hidden five tiny posters around the city and are asking people who spot them to visit their website.

Their mission is to save the world started after the "Supreme Leader" crash landed his flying saucer outside the city's Museum of Technology in July 2019.

His miniature spacecraft came complete with a fairy-sized A to Z of Earth and some dashboard dice, and Dinky Doors said he ordered them to build tiny gateways around the city

A spokesperson for Dinky Doors said: “The Supreme Leader, in an effort to make sure we understand their communications, has gone slightly rogue. They've taken it upon themselves to visit Earth directly and have made the perilous journey through the atmosphere.

“It's amazing that they found Earth, let alone plotted a trajectory that brought them to Cambridge. Sadly, the journey took a lot of fuel, and in a last ditch attempt to land safely, on the advice of their dinky advisor, the Supreme Leader embedded their ship in the Museum of Technology's wall.

The crash-landing came nearly a year after the artists said the alien had made contact and asked them to hide tiny portals in secret locations around the city.

They included a Reality Checker and the Teleport-O-Matic machine which was tucked away between phone boxes.

A Dinky Doors spokesman said: “We decided to build these portals to help bring more joy to the world after being contacted by the Supreme Leader through our TV. They can take you to other, happier, worlds or, in the case of the Teleport-O-Matic, it can transport you three yards for every three pence you insert.

“We can’t reveal our names as we’re not sure that installing street art without permission is strictly legal. But we hoped in this time of miserable news that we could bring a smile to people’s faces. We know children, especially, like interacting with the doors.

“What we are doing is a little bit rebellious but we would never cause any damage by installing the portals – they are not permanent structures.”