Alleged rape victim flees court in distress after man she is suing for £100,000 gives his version of ‘attack’ and denies forcing her to have sex while she was too drunk to resist

Stephen Coxen, 23, admitted the night he spent with his accuser had become upsetting because she had been bleeding during intercourse – but insists he didn’t rape her

A student suing a man she accused of rape for £100,000 ran from court yesterday as he described having consensual sex with her during freshers’ week.

Stephen Coxen, 23, admitted the night he spent with his accuser had become upsetting because she had been bleeding during intercourse.

The woman, known only as ‘M’, said this was because she was raped and forced to perform a sex act on him while too drunk to resist.

The woman, known only as Miss M and who can’t be identified for legal reasons, told the court that during a night out at a student party and a nightclub she drank a four cans of cider, a bottle of rose wine, a bottle of champagne and three glasses of sparkling wine which were mixed with vodka.

She told Sheriff Robert Weir QC that she awoke in her bed to find a man she didn’t know having sex with her – and could not have consented.

Coxen told the Personal Injury Court in Edinburgh he was ‘really shocked’ in 2014 when he found out the claim was being made against him.

He said that he had asked: ‘Are you ok?’ when she stopped having sex with him abruptly and told the court yesterday: ‘If I was raping her then why would I care if she was upset?’

The hearing was then suspended for 20 minutes as ‘M’ ran out of court in distress.

In a landmark case, Coxen, from Bury, Lancashire, is being sued by the woman who accuses him of raping her in St Andrews, Fife, after a night out in September 2013.

Coxen denied the charges and in November 2015 a jury found the case against him not proven, a verdict of acquittal.

His alleged victim, who cannot be named for legal reasons, has brought a civil action.

Coxen was giving evidence in his defence when he was quizzed on his actions on the night he met the student during St Andrews University Freshers Week.

He said he had been out with some friends to the Lizard Lounge venue when the alleged victim tapped him on the shoulder and began kissing him.

‘I was quite surprised but I just went along with it,’ he said, adding that he was happy and they were ‘snogging’ passionately.

He told how they later ended up at the woman’s flat after he was thrown out of the club following an altercation with a group of boys.

‘She seemed to be enjoying my company,’ he told the court, adding that they got undressed in her bedroom and ‘started having intercourse’. 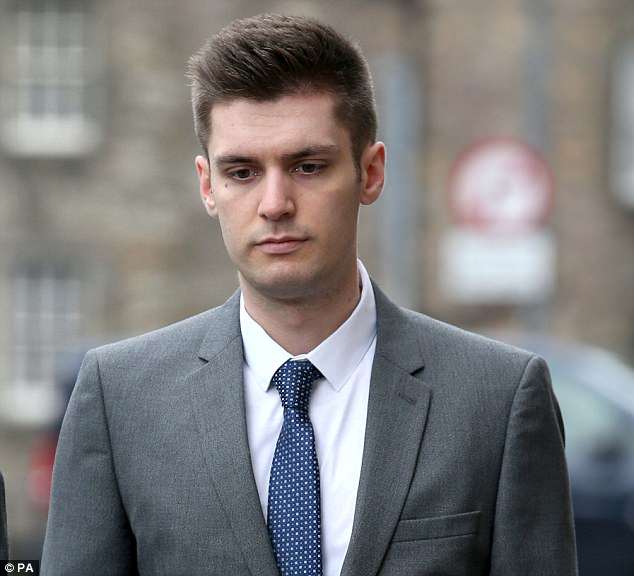 Mr Coxen denied raping the woman in St Andrews, Fife in September 2013 and a jury found the case against him not proven, which in Scotland is an acquittal

He said that at some point she pulled away and when he asked if she was OK, she nodded, but that something then happened that caused him to stop having sex: ‘I got dressed and I left the property quite quickly.’

Asked under cross-examination how he felt about the way he reacted at the time, when he was 18, Coxen replied: ‘Immature, stupid.’

Asked if he regretted the way he had behaved, he said: ‘I obviously apologise for that, [it was] very rude.’

During cross-questioning, the court heard that Coxen’s position was that the woman had lied about him forcing her to perform a sex act.

Simon Di Rollo, QC, representing the pursuer, said: ‘The doctors have accepted her account, saying she was the victim of a life-threatening event. She’s been diagnosed with post-traumatic stress disorder… She’s lied to them as well?’

‘It seems quite an amazing thing to lie about to so many people and for so long,’ Mr Di Rollo continued. He suggested the reason Coxen left abruptly that night was ‘because she was upset and you had raped her’.

Coxen replied: ‘If I was raping her then why would I care if she was upset?’