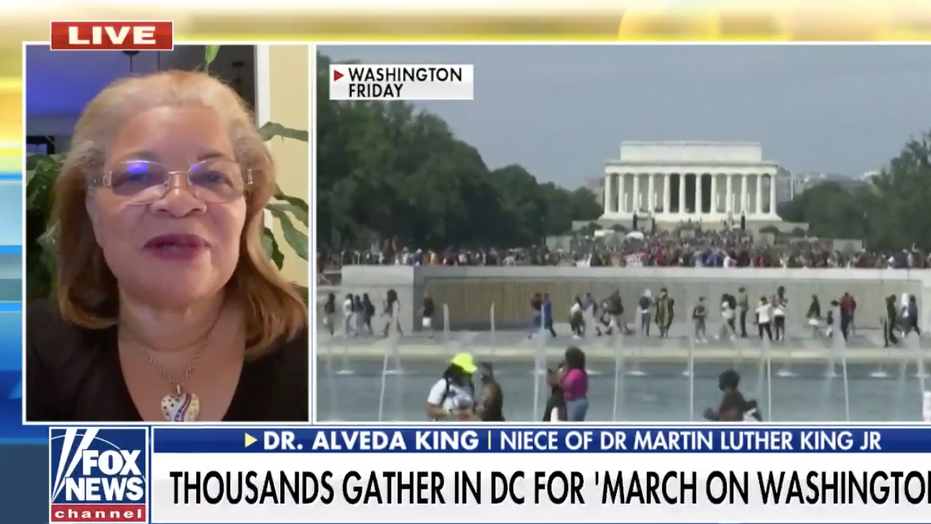 Thousands gather in DC for ‘March on Washington’

Dr. Alveda King, niece of MLK Jr., on the 57th anniversary of MLK’s ‘I Have A Dream’ speech.

Reacting to the thousands of protesters who gathered Friday in Washington on the 57th anniversary of his “I Have a Dream” speech, King said she's glad Americans, especially her cousin Yolanda Renee King and the icon's son, Martin Luther King III, continue to honor his legacy.

"However, I believe it's very important during this time we still remember the 'check marked insufficient funds' that my uncle, Rev. Dr. Martin Luther King Jr., discussed during his remarks."

ALICE MARIE JOHNSON RESPONDS TO POLITICO'S TWEET SHE WAS 'PROPPED UP' BY TRUMP 2020: 'I'M NOT A PUPPET'

"We still have a dream," the evangelist said. "That check is being made good on here in 2020 with President Donald John Trump with the historically Black colleges, where he has given them quite a bit of a boost financially. With the high rates of employment for the African-American community under the administration until COVID-19 and yet President Trump came back in with assistance there, the opportunity zones."

"So the check is being made good on," King added. "America does still have a dream."

As racial justice protests and riots continue in some cities, King stressed that her uncle was a "man of peace" and preached "non-violence."

"We must learn to come together as brothers and as sisters and not perish together as fools," she said. "We have to be one blood and one race and not colorblind. We have to see color. We have to see each other's concerns and then we must be able to respond to those concerns without violence, and I believe that it's very important that we have a strong and a safe and secure nation."