Amazon driver accused of harassing a single mother, 45, after he slammed her for ‘messing him about’ when she missed delivery because she was in hospital with her mother 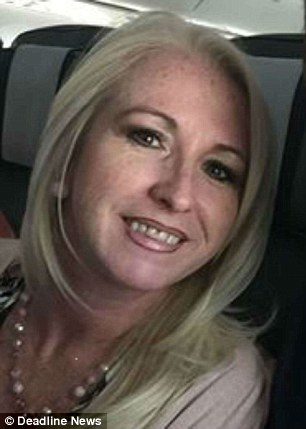 Lisa Jane Watson, pictured, said she was shocked to find an allegedly abusive note left behind by an Amazon delivery driver

An Amazon driver is under investigation after he frightened a single mother by angrily accusing her of ‘messing him about’.

Lisa Jane Watson was astonished to find an official Amazon missed delivery note that had been scrawled on in blue biro: ‘Pick up yer fone in future.’

The delivery driver added: ‘Messed me about. You wasted half an hour cos of you.’

Ms Watson, from Warrington, Cheshire, was unable to take delivery of the package containing Yankee candle plug-in refills because her mother was in hospital with a broken hip.

Ms Watson, 45, says she received 13 calls from an unknown London landline around the time of the delivery. She answered on three occasions but the line was empty each time, meaning she ignored subsequent calls.

The primary school teaching assistant says the ‘disgusting’ note has made her scared to order online again and she has told her children not to answer the door.

The Amazon Prime customer, ordered Yankee candle plug-in refills on Monday and was told to expect delivery on Tuesday.

She said: ‘I had a couple of phone calls around lunchtime, which came up on my mobile as a London number. I ignored the first call but when they called back I answered it, the call then ended.

‘They called again and I answered but again the call ended. I then suspected it was a scam as it was a London number. I was then called numerous times but I declined each call. It was really frightening to receive so many calls like that.’ 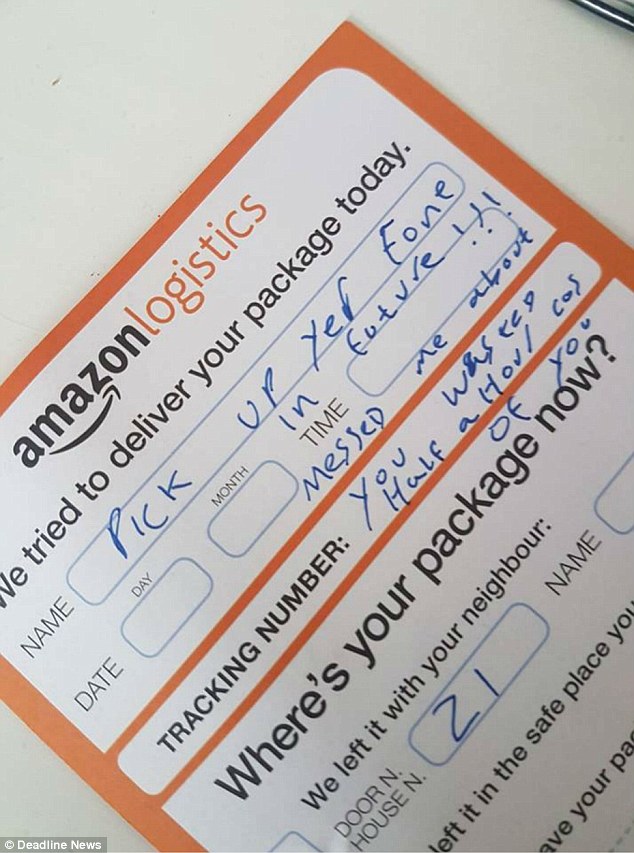 The driver scrawled on the missed delivery sheet ‘pick up yer fone in future!!!’ followed by ‘messed me about’ and ‘you wasted half a hour cos of you’ 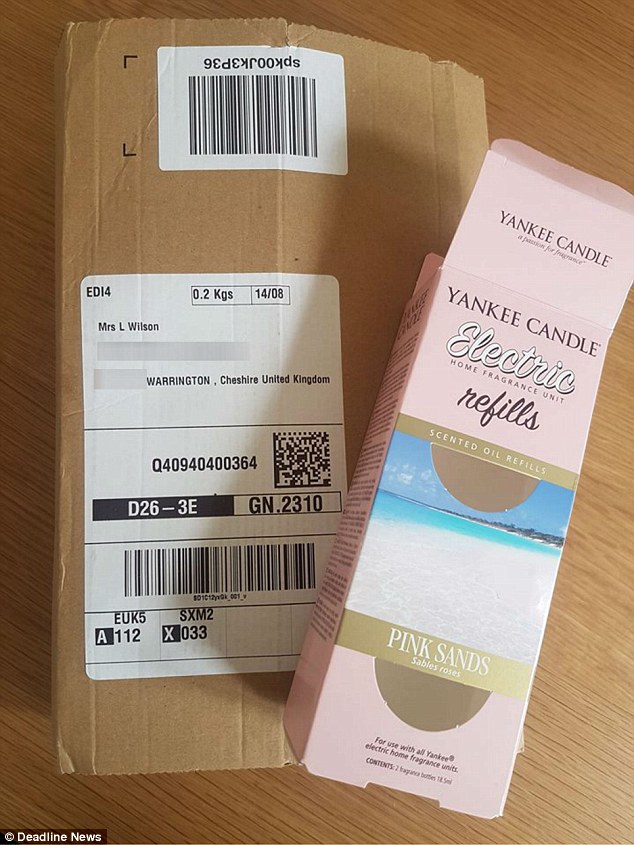 She added: ‘I then arrived home at teatime to the note through the door and my parcel was left with a neighbour.

‘As a single mum with two young girls. It’s quite frightening that there is a driver out there that is that angry with me.

‘I’m scared to order anything again. When I saw the same neighbour he left it with getting a delivery, I was terrified that he [the driver] may come over to confront me.

‘My safety chain is always on now and I’ve told my girls not to answer the door. I got enough on my plate without all this added stress.’

Amazon sent Ms Watson an email which read: ‘I would like to express my sincerest apologies for the note that our driver has left when attempting delivery of a recent parcel.

‘We take complaints of this nature very seriously, and will be taking appropriate actions against this driver for their actions.

‘I have raised the complaint with the driver’s senior managers who will be dealing with this investigation internally.’

The email continued: ‘I have made it clear that this driver is removed fromany deliveries in your area going forward to ensure you do not have to face this behaviour again.’

After Ms Watson posted the note on social media, Sarah Baines responded: ‘How rude a message is that. Totally no need for it.’

Sandra Bentley posted: ‘Absolutely appalling to receive such a rude and offensive message. Here’s hoping you receive a satisfactory explanation and apology.’

A spokesman for Amazon, said: ‘We have very high standards for our delivery service providers and how they serve customers. We are investigating the incident.’

It is understood that Amazon drivers do not have direct access to customers’ numbers but instead dial a central landline number that then connects them to the customer.

Two months ago a delivery driver was investigated by Amazon after a customer complained about an ‘angry unpleasant and aggressive’ note the driver left.

The card, which was posted into David Kirk’s letter box, in Manchester, was ticked with ‘We left it with your neighbours’ box.’

And was accompanied by an angrily scrawled message in block capitals: ‘Answer your phone and a cross face drawn on.’