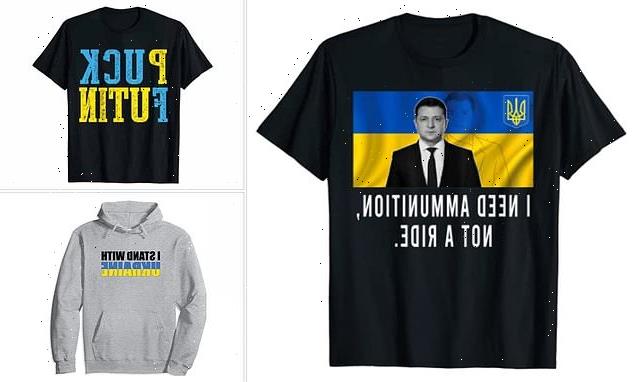 Now for the Zelensky MERCHANDISE: T-shirts with Ukrainian President and his heroic ‘I need ammunition, not a ride’ rebuff to the US are for sale on Amazon for £19.99

T-shirts emblazoned with image of Ukrainian president Volodymyr Zelensky and his heroic words ‘I need ammunition, not a ride’ are being sold on Amazon.

The comedian turned politician has become hugely popular across the world following the Russian invasion of his country, with his fearless speeches endearing him to many.

Now merchandise with his words and image of him is being sold online, with multiple items appearing on Amazon showing support for the Ukrainian head of state.

Many of these feature the words ‘I need ammunition, not a ride’, which he is reported to have said in response to offers from the United States to evacuate him amid suggestions he could be targeted by Russian assassins. 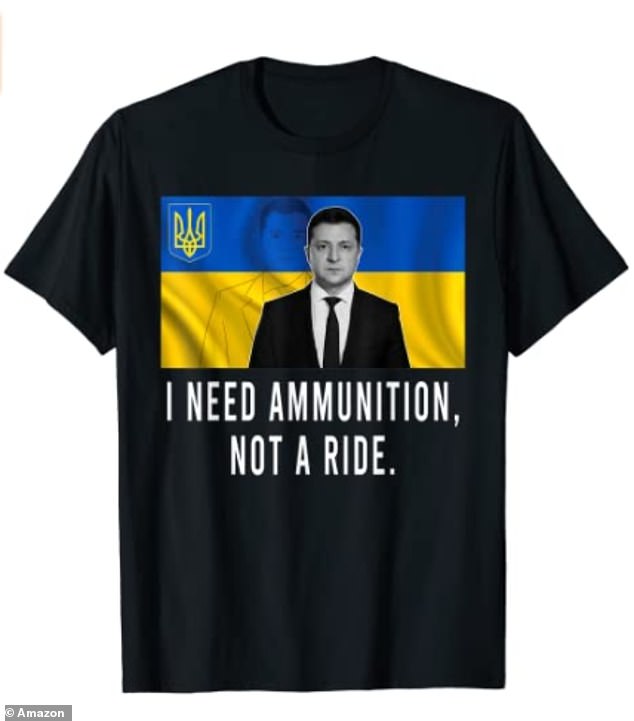 Shirts with bearing the image of President Zelensky have started to appear on Amazon, accompanied by his heroic words ‘I need ammunition, not a ride’. The one pictured above is available from £17.49

These tend to be written either underneath an image of President Zelensky himself, an image of the Ukrainian flag or a map of the country.

Other shirts available on the site include those with words ‘Not all heroes wear capes’ and ‘I stand with Ukraine’ printed across them, while a popular item featured a play on words – ‘Puck Futin’ – a defiant statement against the Russian president.

Small Etsy shop owners are also showing their support for Ukraine with a flood of new merchandise – with some even using the profits to help the war-torn country.

For the price of £22.26, plus shipping, for example, customers of the Etsy shop Winding Road Canada can purchase an array of blue and yellow polymer clay earrings in the shapes of hearts, circles, and more – with proceeds supporting the besieged citizens of Ukraine via the country’s Red Cross branch.

‘Here are a variety of Ukrainian themed earrings,’ the shop owner Sarah wrote. ‘Wear them and support freedom and peace for Ukraine. All of the money from sales, short of shipping fees, will go directly to the Red Cross’ Ukraine Crisis campaign.’

Sarah also said they would ‘cover the cost of materials for as long as that is sustainable’ and would provide customers with proof of donation, if requested.

Other small Etsy shops are offering products that directly support various groups in Ukraine, such as the National Bank of Ukraine and the Armed Forces. 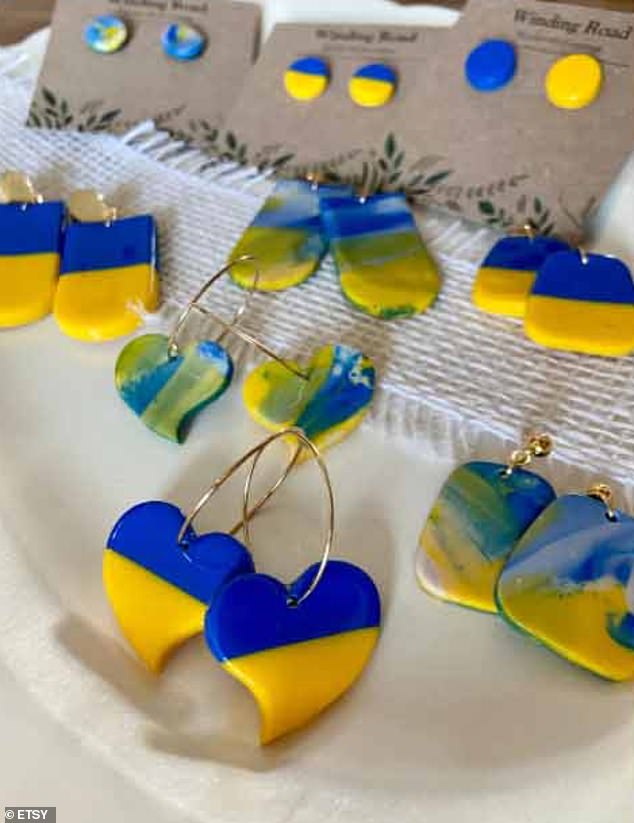 Many Etsy shop owners are showing their support for your Ukraine as they sell products and donate the profits to various Ukrainian organizations, including the Red Cross and Armed Forces. Canadian shop Winding Road Canada offered a display of earrings for only a little over $8 in many shapes, including hearts, to show support for the Ukrainian people 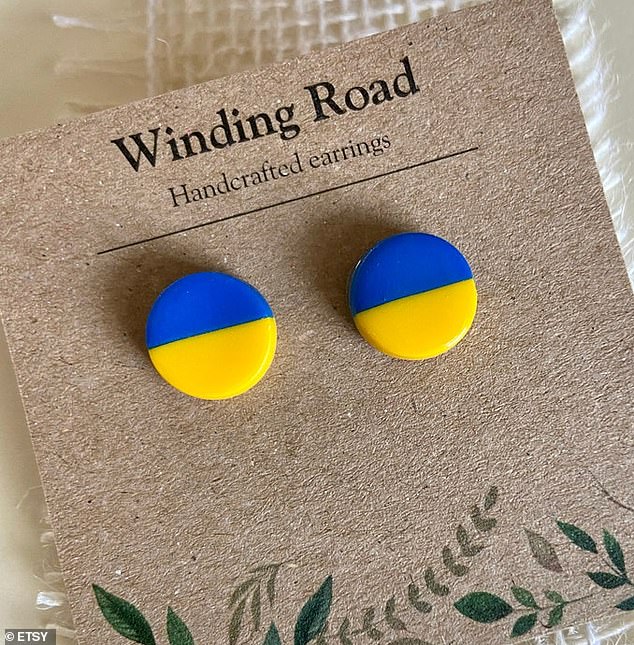 ‘Puck Futin’ shirts have proven extremely popular on the site, with few left in stock as of today.

One description of the shirt read: ‘I Stand With Ukraine Puck Futin design, a perfect idea to express the support of Ukraine and its people.’

Another read: ‘I Stand With Ukraine tee to show support and love to Ukraine and all Ukrainian people.’ 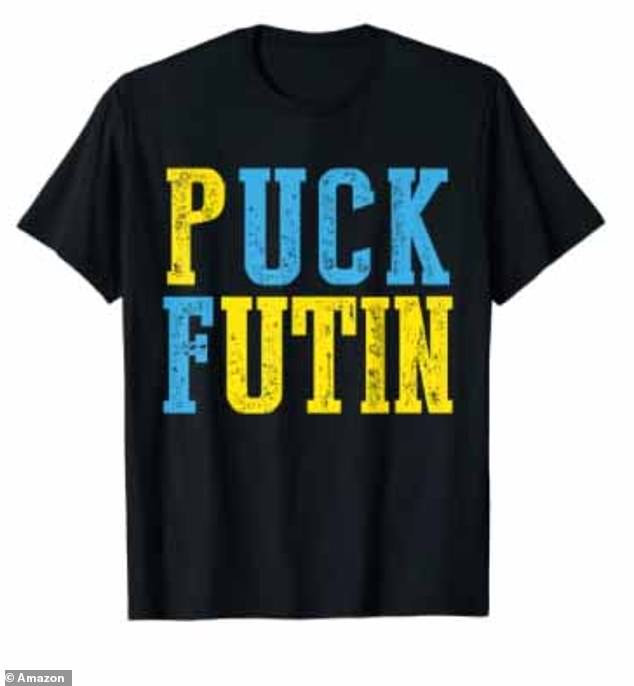 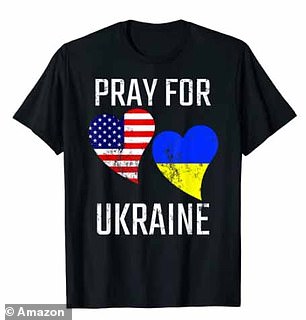 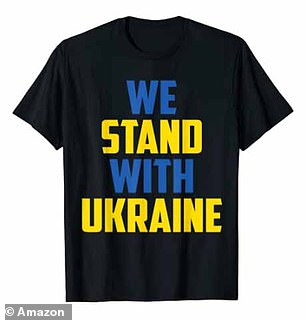 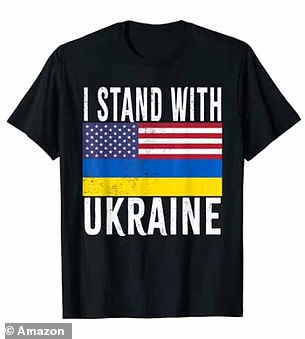 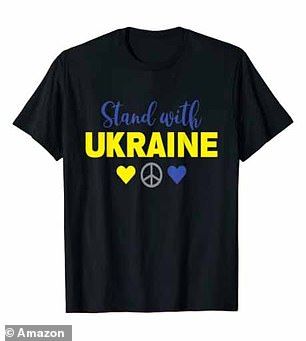 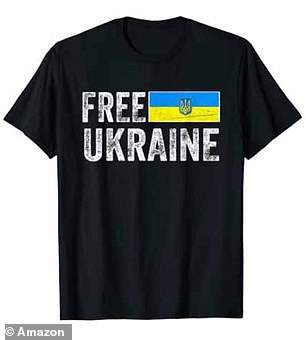 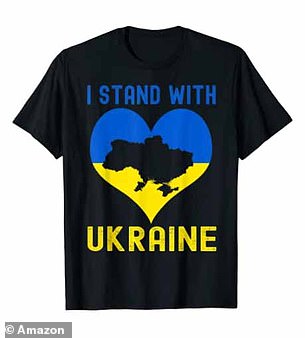 Retail giant Amazon saw an influx of new t-shirts showing support for war-torn Ukraine this week as Russia violently invaded the Eastern European country. Many shirts featured the country’s flag colors – blue and yellow – and also displayed American flags. A popular shirt also had a play on words to denounced the Russian president with the words ‘Puck Futin’ written in large letters

Another Etsy shop called Shop USSR Goods, owned by a woman named Maxim  – who usually only sells watches and jewelry – is selling a digital print of a Ukrainian girl holding the state’s flag in a field to help her family.

‘My family lives in Ukraine,’ she wrote. ‘My USSR Goods Store has to go on vacation for an unknown period. As you know, my country, Ukraine, was attacked by Russia.

‘We are limited in the ability to earn and send parcels. If you want to support us, please buy this listing. Thank you for your kind heart!’

The digital download is going for a small price of £5.

An Washington DC Etsy store called Liberty1765 is also hopping on the trend, selling a shirt with the Ukrainian flag, the snake from US Gadsden flag – famous for its ‘Don’t Tread on Me’ phrase – with the Ukraine spelling of ‘Go f**k yourself’ in honor of the brave soldier on Snake Island in Ukraine to told an enemy warship: ‘Russian ship: Go f**k yourself.’

The reported 13 soldiers on the island, located in the Black Sea, were bombarded by Russian air support and ultimately died.

‘We honor their sacrifice and their defiant spirit with this rework of the Gadsden Flag,’ the shop owner Tim wrote. ‘[One hundred] per cent of the profit from sales of this shirt will go to the fund created by the National Bank of Ukraine to support the Armed Forces of Ukraine.’ 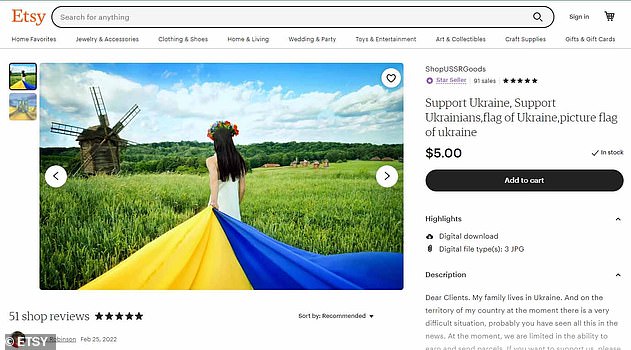 A Ukrainian shop owner Maxim, who’s business had to be put on hold due to the inability to get product in and out of the country, offered a cheap digital painting of a Ukrainian girl holding the state’s flag to help her family in the country 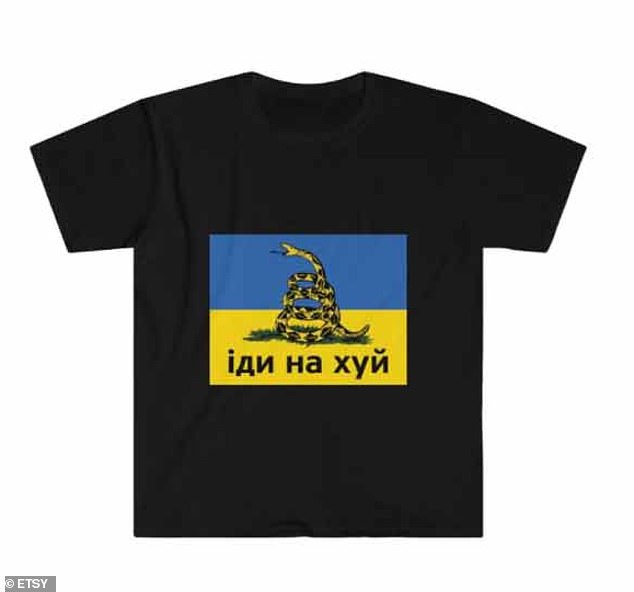 A small Etsy shop took a play on the Gadsden flag – famous for its ‘Don’t Tread on Me’ phrase – by adding the Ukrainian flag and the country language on it. The phrase quoting the soldiers on Snake Island on Friday who told a Russian warship to ‘go f**k yourself’

Americans weren’t the only contingent to harness the power of merchandise to fundraise for the people of Ukraine, as the UK also showed its support on Amazon.

Some items include hoodies and a classic British item: A beer pint that retailed for around £15.

Other ways to donate to Ukraine include through UNICEF, Doctors Without Borders, Voice of Children, International Committee of the Red Cross (ICRC), the UN Refugee Agency, and more. 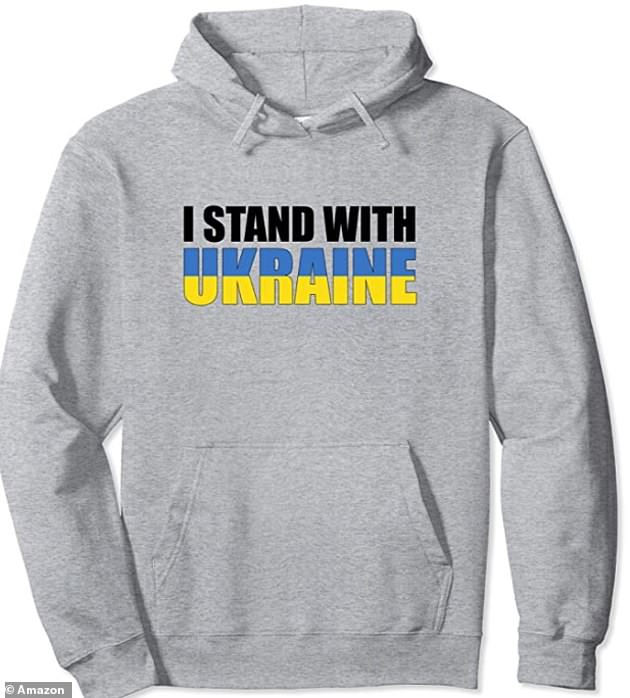 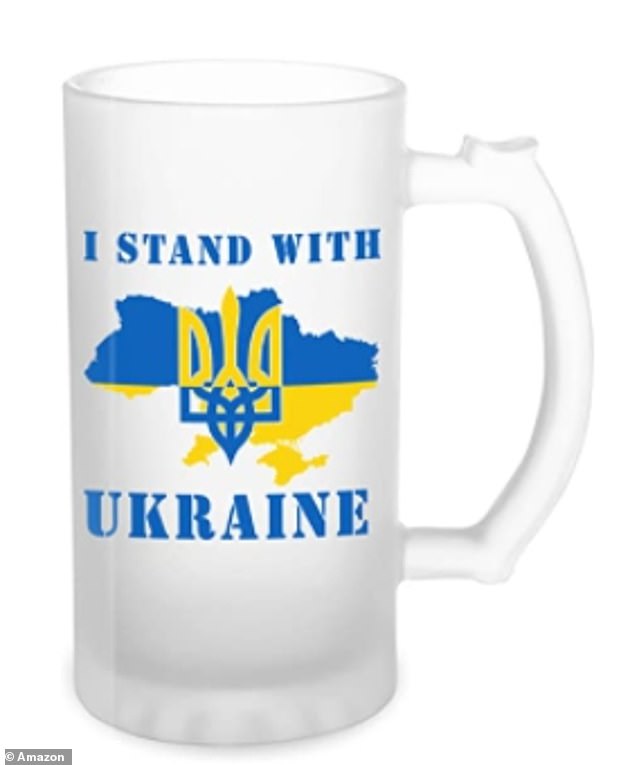 As the war carries on, Western officials warn Russia could use savage superweapons that vaporize bodies and crush internal organs if their assault of Ukraine becomes bogged down tonight.

They fear Vladimir Putin could resort to high-power thermobaric weapons – dubbed the ‘father of all bombs’ – as brave Ukrainians resist his attempts to take control of Kyiv.

There are also concerns that units that are running behind schedule as they encounter stiff opposition could resort to indiscriminate shelling as a terror weapon.

Thermobaric weapons – also known as vacuum bombs – are high-powered explosive that use the atmosphere itself as part of the explosion. They are among the most powerful non-nuclear weapons ever developed.

A thermobaric bomb dropped by the US on Taliban in Afghanistan in 2017 weighed 21,600 pounds and left a crater more than 1,000 feet wide after it exploded six feet above the ground.

Thermobaric weapons were developed by both the US and the Soviet Union in the 1960s. In September 2007, Russia detonated the largest thermobaric weapon ever made, which created an explosion equivalent to 39.9 tons.

The US version of the weapon reportedly costs over $16million each.

‘My fear would be that if they don’t meet their timescale and objectives they would be indiscriminate in their use of violence,’ the official said. ‘They don’t adhere to the same principles of necessity and proportionality and rule of law that Western forces do.’ 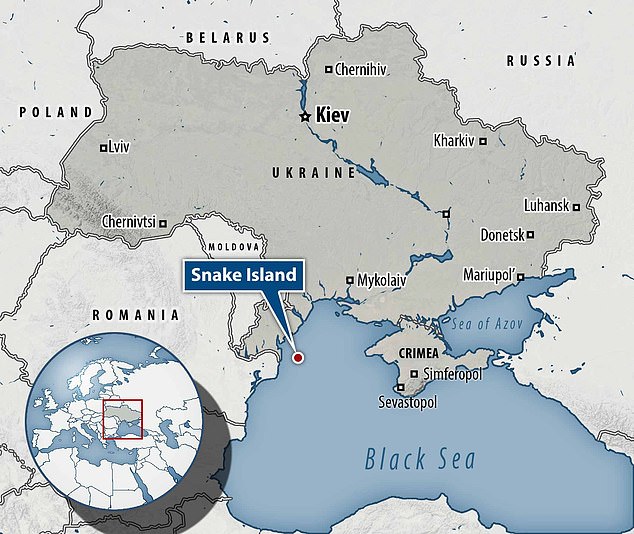 The small contingent of soldiers, allegedly 13 in number, were posted on Snake Island in the Odesa region and were defending the territory after Russia launched its full-scale invasion of Ukraine

The bomb works by using oxygen from the surrounding air to generate a high-temperature explosion, making it far deadlier than a conventional weapon.

While Russian special forces have reached the suburbs of Kyiv, while a convoy of vehicles measuring 40 miles in length is snaking its way towards the capital.

Western officials have suggested Russia will kill Ukrainian President Volodymyr Zelensky and his ministers if they seize Kyiv.