AMAZON is still selling offensive fancy dress encouraging shoppers to 'black up' despite sending a message of solidarity to the Black Lives Matter movement.

The retail giant still has listings on its website for Zulu warrior regalia despite tweeting out a message saying "we stand in solidarity with the black community" and "in the fight against systemic racism and injustice". 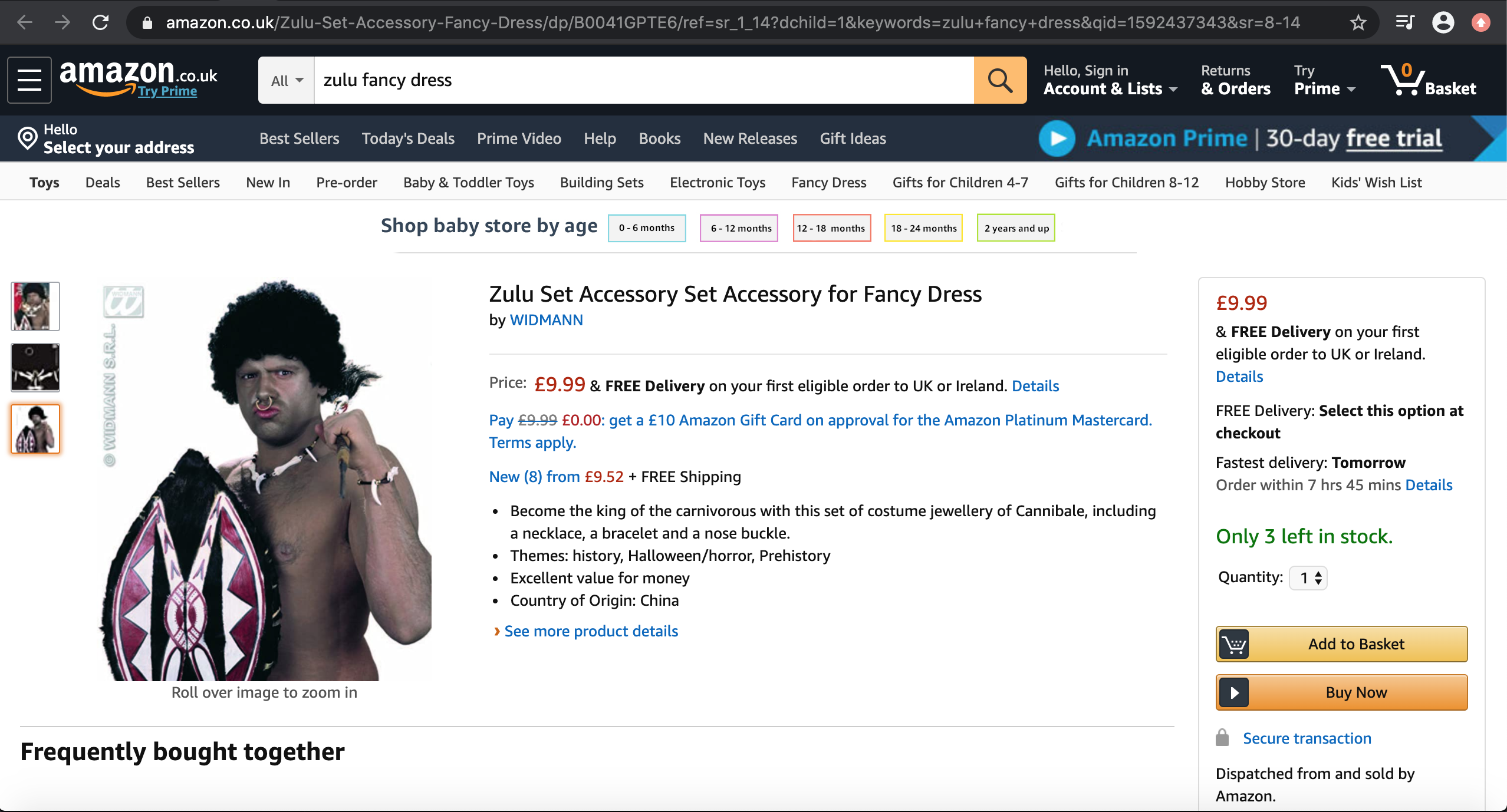 It is also still selling native Indian fancy dress kits including a multi-coloured feathered headdress "for dressing up as a red native American."

Last month the company tweeted its support for the Black Lives Matter movement, insisting "the inequitable treatment of Black people in our country must stop."

It said: "Together we stand in solidarity with the Black community – our employees, customers and partners – in the fight against systemic and racial injustice."

But costumes encouraging punters to 'black up' and which fuel cultural appropriation are still available on its website.

Cultural appropriation is when one culture adopts elements of another culture without respecting its significance or origin.

The listing for the Zulu accessory says punters can "become the king of carnivorous cannibale with this fancy dress accessory jewellery set including [sic] a necklace, a bracelet and a nose buckle."

The Zulu is the largest ethnic group in South Africa with 10 to 11 million people and dates back to 1816.

In 1879, the British fought a war against the Zulus to try to extend its influence in South Africa and the Zulu warriors were only defeated after a series of bloody battles.

Under apartheid in South Africa from the 1940s, Zulu people were denied citizenship and forced into the Kwazulu Bantustan – a designated area for black African people to separate them from white people.

Bantustans were abolished in 1994. Today, the Zulu population is mainly settled in the province of Kwazulu-Natal in South Africa.

Black Lives Matter protests have swept the globe after the death of African American George Floyd who died in police custody when an officer pressed a knee to his neck as he said: "I can't breathe."

Protests have been held across UK cities including Bristol, London and Manchester in solidarity with the black community, and yesterday Oxford University announced it would remove its controversial Cecil Rhodes statue from Oriel College.

It is not the first time Amazon has come under fire for selling racist and culturally-insensitive items.

In 2018 shoppers slammed the global brand for selling T-shirts, mugs and baby bibs with the logo: "Slavery gets s*** done."