Rio de Janeiro: Samba competition is getting political in Brazil, with one of Rio's top samba schools and other groups paying tribute to Marielle Franco, an activist for gays and Afro-Brazilian rights who was slain almost a year ago.

Mangueira, one of the oldest samba schools in Rio, included the former city councilwoman in a parade honoring Brazil's hidden heroes, those that history books often forget or choose not to mention. 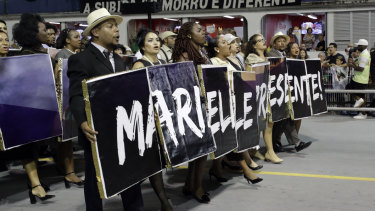 Dancers from the Vai-Vai samba school pay homage to the slain councilwoman Marielle Franco during Carnival.Credit:AP

Franco and her driver, Anderson Gomes, were shot to death in their car while driving in downtown Rio on March 14, 2018. The killings shocked Brazilians and set off a wave of national demonstrations, but police have never named suspects.

"Marielle was a woman, a fighter, from the favela, who overcame inequality, went to university, was elected councilwoman, fought for minorities, denounced and investigated public power," said Deivid Domenico, who co-wrote Mangueira's samba anthem for this year's Carnival. 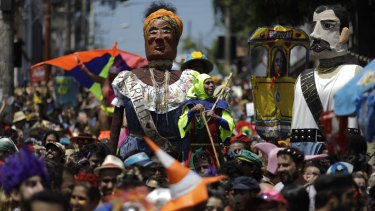 Revelers perform next to a giant puppet depicting the slain councilwoman Marielle Franco.Credit:AP

For the composer, the need to write about the slain councilwoman and Brazil's forgotten history was all the more important this year as Brazilians recently elected a far-right president who has repeatedly praised the 1964-1985 dictatorship.

Franco grew up in Rio's Mare favela and was black and homosexual – a rarity in Brazil's overwhelmingly white and male political spectrum.

Franco "was not only a human being, it was an idea, a force", Domenico said. "She became a fighting flag."

Thomaz Miranda, one of the authors of Mangueira's samba, also said in his social network channels that the lyrics "are for the memory of Marielle" and "all the struggle that is yet to come". 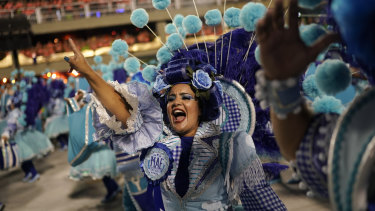 A performer from the Imperatriz Leopoldinense samba school parades during Carnival celebrations at the Sambadrome on Monday, local time.Credit:AP

While progressives hail Franco as a hero, admirers of far-right President Jair Bolsonaro have taken issue with her transformation into a symbol after her death.

Rio state lawmaker Rodrigo Amorim, who last year showed off a street sign honoring Franco that he and another candidate had broken, told the newspaper O Globo he was disappointed the samba school included the councilwoman in its parade. 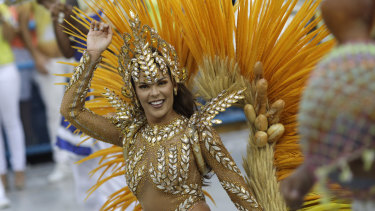 Drum queen Elaine Azevedo from the Unidos da Tijuca samba school performs during Carnival at the Sambadrome on Monday.Credit:AP

"Just as universities are absolutely dominated by this cultural dictatorship that the left is trying to impose, unfortunately it has also reached the samba school," said Amorim, who belongs to Bolsonaro's PSL party. 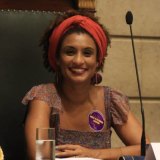 A Sao Paulo-based samba school, Vai-Vai, paraded in that city with Franco's sister and daughter, while carrying a large photo mosaic of Franco along with the slogan "Marielle present!"

Benicio, Franco's partner, attended a bloco in Rio wearing a shirt reading "Who killed Marielle?" She also carried a rainbow flag around the Toco-Xona bloco with the face of the murdered councilwoman.

The Ilu Oba de Min bloco in Sao Paulo, which promotes Afro-Brazilian culture, also remembered the councilwoman. "They are not going to silence us!" the female-only bloco sang Sunday. 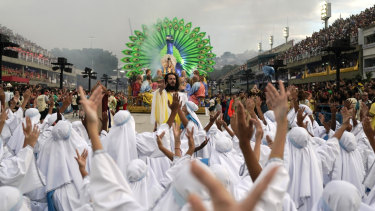 Rodrigo Rodrigues, an internet technology student who was one of the revellers, said the bow to Franco comes from her example and from her being a symbol of resistance to the new president.

"Marielle is also a counterpoint to this narrative that Brazil is narrow-minded and hating of minorities. She is celebrated because she is pro-LGBT rights, because she is black and because she comes from a favela," Rodrigues said. "We are not merely teasing the conservatives that dislike her politics, we are giving praise to a woman that was killed by reactionaries."