The NSW government has warned that the job of fixing Sydney’s roads is “absolutely enormous” due to the damage caused by severe flooding in areas such as the Hawkesbury-Nepean Valley and the northern beaches.

Metropolitan Roads Minister Natalie Ward said the task of repairing potholes would “not be a quick fix” after the severe weather had worsened the state of the city’s roads. 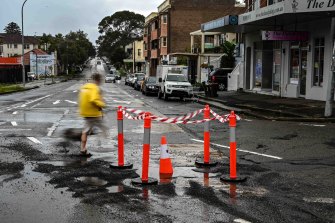 Road damage due to the heavy rain at Blair street in Bondi.Credit:Flavio Brancaleone

“It’s an enormous task. There will be a lot of them out there, and it’s going to take a long time to get them fixed,” she said on Wednesday. “You can’t fix them permanently until it’s dry weather.”

Local councils have been inundated by thousands of reports of dangerous potholes from drivers who have damaged their cars on city and regional roads, sparking debate about how the problem should be managed.

Ms Ward has directed the state’s transport agency to urgently conduct an audit of the state of Sydney’s roads while prioritising repairs to motorways because of their critical significance. An estimate of the repair bill will not be known until the audit is complete.

“Make no bones about it, we have a huge job to fix the potholes that have been created,” said Ms Ward, adding that it was a shared problem facing the state government and councils.

Roads in the Hawkesbury-Nepean Valley in Sydney’s northwest, and Manly, were among those hardest hit by the floods.

NRMA spokesman Peter Khoury said roadside assistance crews had carried out 680 patrol jobs, 297 of which were on cars that needed to be towed, in the 12 hours from midnight on Tuesday.

Those jobs were “overwhelmingly people with busted tyres from driving through potholes”, he said.

“The fact the tow numbers are so high is a worrying demonstration that we can’t do anything for so many of them, we have to get the car towed because, with the amount of damage, we can’t fix it on the side of the road.”

A Transport for NSW spokeswoman said its road service providers had repaired 4200 potholes in the past six months – the same number the Central Coast Council said its road crews had fixed during recent storms. 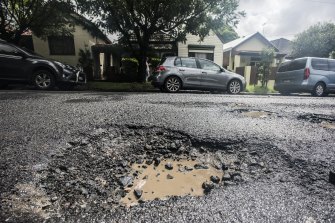 Sultan Awali, manager of Jax Tyres & Auto at Sutherland, said he was working on “at least 10 to 15 cars every day or two” for damage caused by potholes.

“Business is good, it’s just unfortunate for those people. They’re never happy when they come in.”

Sanjay Sethi, who owns Kismet Mechanical in Leichhardt, said he had fixed cars with damage to tyres, wheel rims and suspension for drivers, some of which hadn’t seen potholes or couldn’t control their car once they hit them.

“It’s just lucky none of them were hurt.” 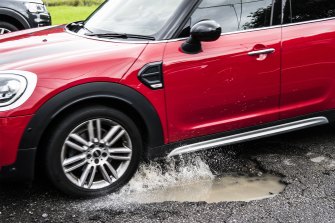 Hornsby Shire councillor Nathan Tilbury said councils relied on motorists to report potholes. He said even drivers who were travelling slowly had reported damage to their tyres, wheels and the bottom of their car.

“A lot of people are frustrated. They just want it fixed. We’ve got teams out there constantly trying to get out there before the potholes get bigger. But we just can’t be everywhere.”

Customer Service Minister Victor Dominello this week suggested NSW could introduce a statewide register for potholes, rather than have drivers report them to the government or one of 128 local councils in the state.

He was also keen to explore technology that uses a camera or sensor fitted to garbage trucks to detect the damage and send the details to a shared, statewide database.

“The potholes that are there are going to get worse. The type and the amount of damage to the road network is pretty significant.” 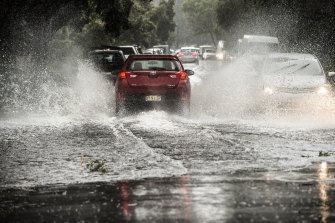 Cars have reported damage after driving on Sydney’s roads during the rain. Credit: Steven Siewet

Local Government NSW treasurer Jerome Laxale, who is also a City of Ryde councillor, said funding from the government to help councils patch up roads would be “greatly appreciated”.

He said councils could also face claims for compensation from drivers whose cars were damaged.

A Transport for NSW spokeswoman said road crews were “working around the clock to make repairs and keep roads open and safe”.