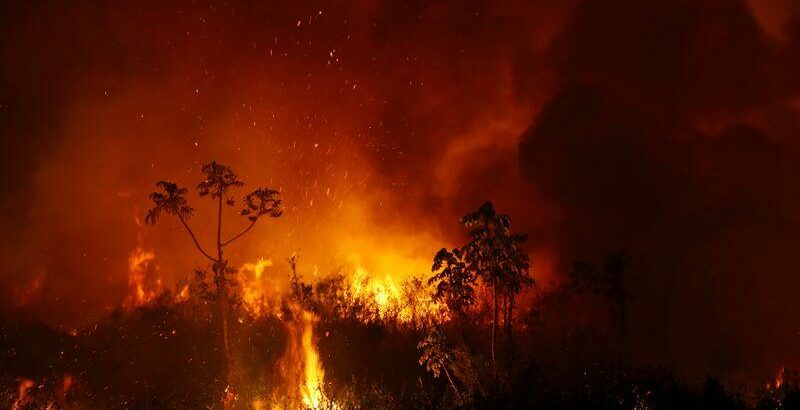 WASHINGTON/BOSTON (Reuters) – With Democrats at the helm, the U.S. securities regulator is pledging to crack down on companies and funds that mislead investors over climate change risks, but that may be easier said than done, more than a dozen attorneys and former agency officials say.

FILE PHOTO: Smoke from a fire rises into the air as trees burn amongst vegetation in the Pantanal, the world’s largest wetland, in Pocone, Mato Grosso state, Brazil, September 3, 2020. REUTERS/Amanda Perobelli

The Securities and Exchange Commission (SEC) has set up a taskforce to police public companies that fail to disclose material business risks stemming from climate change, such as the potential depreciation of fossil fuel assets or supply chain disruption caused by flooding or wildfires.

The 22-person team, housed within the enforcement division, will also scrutinize investment advisers and funds touting sustainable products for so-called “greenwashing” and other compliance issues, the agency said.

The initiative is part of a broader effort by President Joe Biden’s administration to tackle and plan for climate change. With a record $51 billion flooding into sustainable U.S. funds in 2020 alone, according to Morningstar, investors need to be better informed, the SEC says.

“The commission is responding to investors’ growing concerns about materially misleading statements and omissions about companies’ climate-related risks and activities,” said acting deputy enforcement director Kelly Gibson, who is leading the taskforce.

While prosecuting fraudulent or sloppy disclosures is at the core of what the SEC does, the new initiative takes the agency into uncharted terrain, the lawyers said.

In 2018, it closed a high-profile probe here of the way ExxonMobil accounted for the impact of climate change on its assets, without taking action.

Whereas European regulators require large companies to disclose risks and metrics on environmental matters and are introducing sustainability disclosures for investment products, the United States has no formal climate-specific disclosure rules. [L5N2KZ657]

It also has not agreed definitions for key terms such as “sustainable,” and has no commonly used standards for measuring corporate environmental goals or quantifying and reporting climate risks.

“The SEC is looking to ensure the consumer is really getting what they’re being advertised,” said Sarah Bratton Hughes, head of sustainability for Schroders in North America. “What makes this so difficult is the lack of standardization.”

In 2010 guidance, the SEC gave companies some examples of climate change developments they should consider “material” and therefore must be disclosed under securities laws.

As of 2020, 60% of Russell 3000 companies mentioned climate risk in filings, up from 35% in 2009, according to a Brookings Institution review. Those disclosures tended to focus on declining fossil fuel use while glossing over issues such as rising sea levels, fires or heat waves, the study said.

Such gaps by themselves are tough for the SEC to prosecute because the 2010 guidance is broad, outdated and, unlike a formal rule, has weak legal standing, lawyers said.

The law also gives companies leeway on forecasts made in good faith, which could be hard to disprove given the long time horizons and complexities of climate science.

“They would have to prove a disclosure was materially misleading – and intentionally or at least recklessly misleading. Those are pretty high burdens,” said Mark Schonfeld, a former SEC director who is now partner at Gibson, Dunn & Crutcher.

“Investigating disclosures is some of the most fundamental work the SEC does and ESG (environmental, social and governance) is no different than any other subject matter in this regard,” said the SEC’s Gibson.

California-based activist group As You Sow gives “failing” grades, for example, to 20 U.S. funds with sustainability mandates that have exposure to fossil fuel companies.

Yet proving funds are misleading investors about their investment strategies could be tough without a standard definition for “sustainability” and related terms.

Fund marketing materials are also crafted in broad language with flexible investment parameters to shield them from litigation, lawyers said.

They expect the SEC, which this week began soliciting industry feedback on standardizing its climate change disclosures, will ultimately tighten its rules to address these challenges. But that could take time.