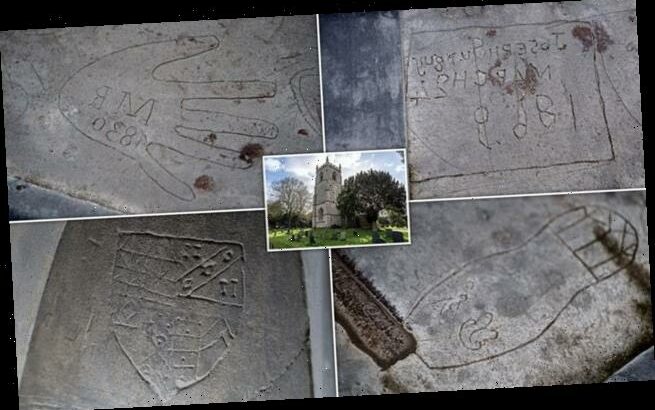 Art in heaven! Hundreds of examples of ancient graffiti dating back nearly 300 years are discovered on walls of parish church in finding of ‘national significance’

Hundreds of historic etchings dating back nearly 300 years have been discovered in a parish church.

Historians say the artwork, which covers the walls, tower and roof of St Wilfrid’s Church in the tiny village of Kelham, Nottinghamshire, is of ‘national significance’.

The markings include coats of arms, dates, initials and caricatures, with the oldest dating back to 1730. 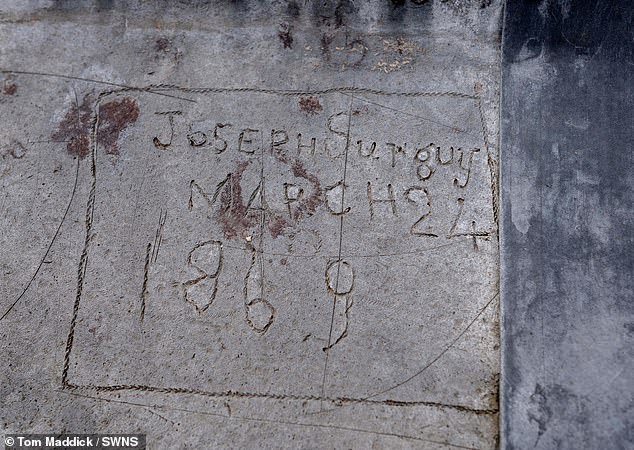 Ancient graffiti has been discovered in St Wilfrid’s Church in Kelham, Nottinghamshire. The historic etchings are thought to have been the work of 18th century tradespeople, who would have carved them into the stone when they passed through the church 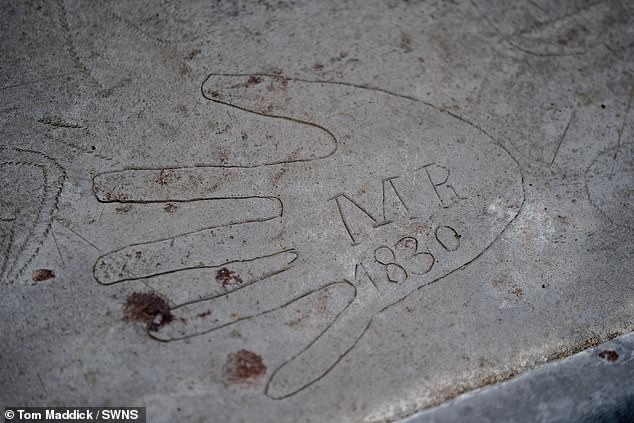 Some markings are visually very detailed, such as this one, and experts believe it would have taken ‘hours and hours over several days’ to leave these permanent artistic markings in the stone 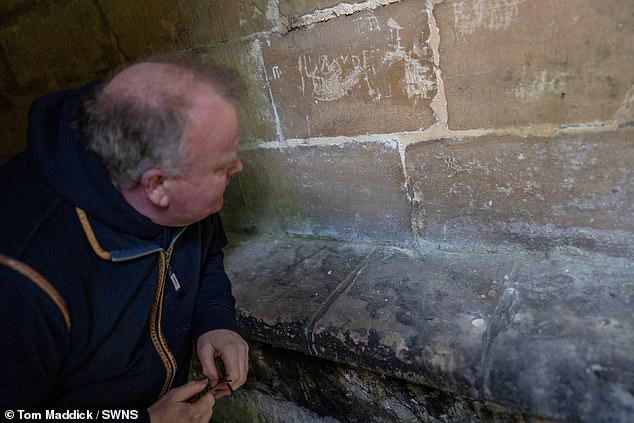 Phillip Stainforth, Church Warden at St Wilfrid’s (pictured), poses with the historical find which one expert is dubbing a discovery of ‘national significance’ 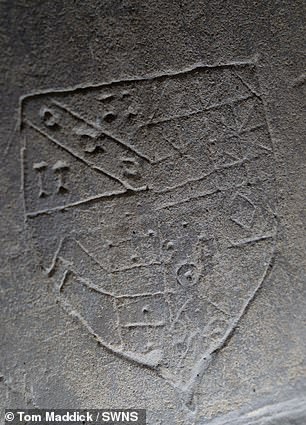 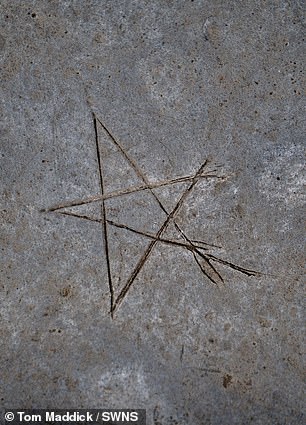 They are thought to have been carved into the stone by tradespeople who passed through the church as a local custom in the 18th century.

Church leaders now hope to raise thousands of pounds to remove the graffiti and put it on public display for all to enjoy.

Resident and historian Dr Judith Mills said: ‘I was aware roofs could have graffiti on, but it’s the different types we have, and the sheer quantity that is so different to any other place.

‘For such a small community, it’s quite an unusual thing to have.

‘We hope to sink the graffiti into the floor of the tower so it can be viewed by visitors.

‘It is important to remove the markings safely and preserve them for the future.’ 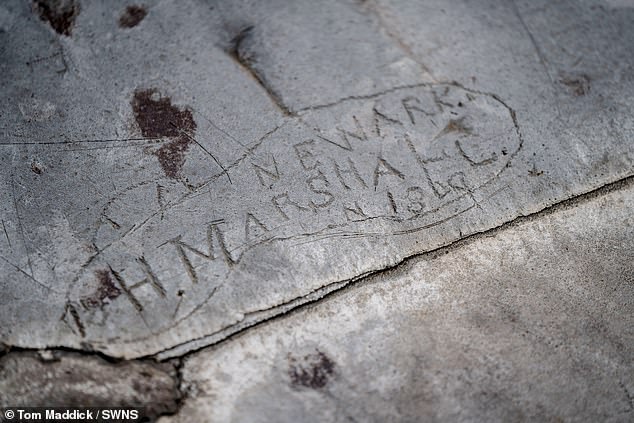 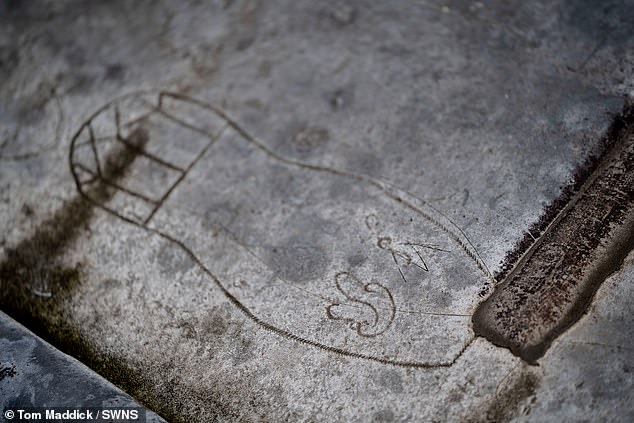 Historians say it’s not unusual to find graffiti at historic churches such as St Wilfrid’s in Kelham, but this haul of ancient etchings (above) is ‘quite unusual’

Experts such as Dr Chris Brooke, church archaeology researcher at the University of Nottingham, are also weighing in on the find.

Dr Brooke said the graffiti would likely have been left by local tradespeople in the 18th and 19th centuries.

‘That was quite a common thing to do but at Kelham we have a lot more than we would usually find,’ he said.

‘There are far more important and larger churches and cathedrals where you would expect to have more of this type of thing, but certainly in a little parish church this is the greatest quantity I have come across.

‘Whoever has done it has [spent] an awful amount of time on it. It’s not a five-minute job with a pen knife.

‘This has probably taken hours and hours over several days so they are works of art.

‘It plays its part in more than just local history; it’s got some national significance to it as well.’ 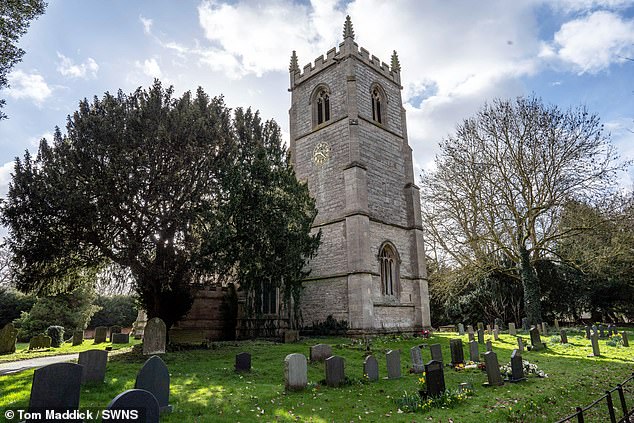 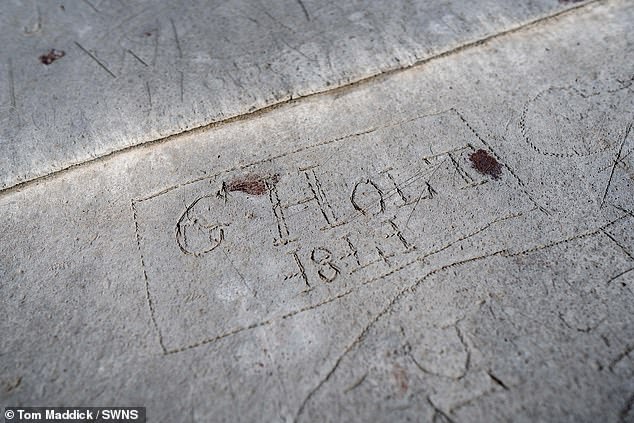 Experts have dubbed the drawings and inscribed initials found at St Wilfrid’s Church, Kelham, as ‘works of art’

The Grade I-listed church that dates back to the 14th century is found in the grounds of Kelham Hall, which sits in 52 acres of parkland.

The Reverend Georgie Hadley of St Wilfrid’s added: ‘The graffiti was quite wonderful to discover.

‘We hope that placing it on display will bring the church to life for local people.’