Ancient Roman artefacts thought to date back around 2,000 years have been seized from a frozen seafood shop in Spain after the owner’s son is thought to have found them while out fishing.

Spain’s Guardia Civil recovered 13 Roman amphoras while carrying out a routine inspection of the shop’s storage in Alicante.

Local media reports suggest the shop-owner’s son had found the ancient items while out fishing, and decided to bring them back as decorations. 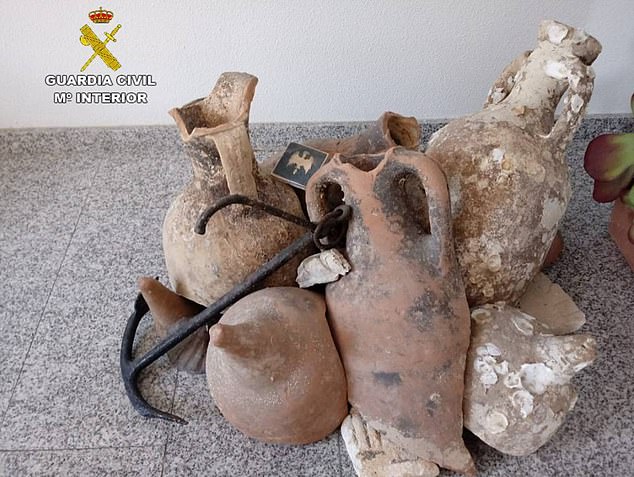 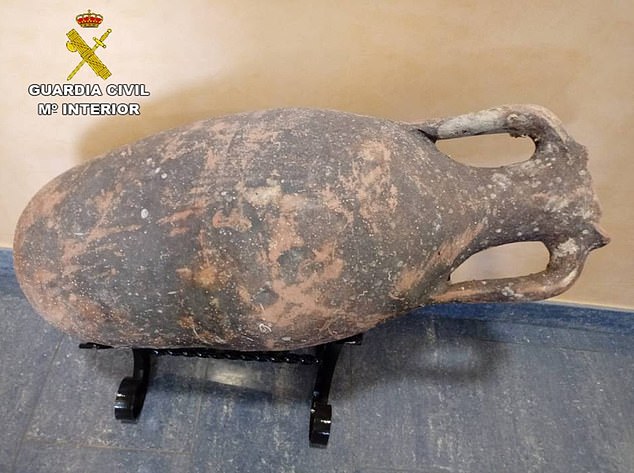 One of the amphoras was described as ‘of significant importance, due to its exclusivity’

They also discovered an 18th century anchor inside the store.

In a statement issued on Wednesday, the Civil Guard wrote: ‘Agents observed several ceramic amphoras in different points of the facilities, a metallic anchor and a limestone plate with an inscription that, at first glance, could be of considerable age.

‘The Civil Guard is now investigating the owner of the establishment and his son as alleged perpetrators of a crime against historical heritage and another against heritage and socio-economic order.’

Despite local reports, Spanish authorities are considering whether there was foul play.

A force spokesman said: ‘The amphoras could come from the looting of wrecks.’

Following extensive testing at the nearby Santa Pola Sea Museum, it was decided they were all Roman amphoras, in varying states of condition, though one was described as ‘of significant importance, due to its exclusivity’.

The amphoras were used to transport oil across the Mediterranean sea to Rome.

Others were used to transport wine and fish sauces.