ANDREW PIERCE: The shake-up threat for the House of Lords after its Brexit sabotage ‘Typical of these saboteurs is the EU-adoring millionaire Lord Heseltine, the one-time Deputy PM, who attended just three per cent of all votes last year’

Many Tory MPs hope that the House of Lords has signed its own death warrant by inflicting ten defeats on the Government’s Brexit legislation.

What is particularly galling is the way a lot of peers who rarely visit the House have turned up in an attempt to defy the democratic wish of the British people.

Typical of these saboteurs is the EU-adoring millionaire Lord Heseltine, the one-time Deputy PM, who attended just three per cent of all votes last year.

No doubt, it would have been less if he hadn’t stirred his loins to vote against Brexit.

Fellow Tory Lord (Chris) Patten, the sanctimonious former EU commissioner who was also a disastrous chairman of the BBC Trust, is one of the leaders of the Lords revolt.

With a bulging portfolio of jobs (private equity firm work, on the board of an energy company, Oxford University chancellor, etc), he participated in just ten per cent of votes, claiming £3,000 in tax-free attendance money in the last year.

A former bigwig with the CBI (that Brussels-fawning business lobby), Lord Turner of Ecchinswell has an even worse record — voting in less than two per cent of divisions in the last year.

Another Remoaner rebel piling the agony on Mrs May is Indian beer tycoon Lord Bilimoria.

Worth around £80million, he received £11,000 in tax-free Lords attendance money in the past year.

These shabby examples have led my Cabinet spy to warn of a major shake-up of the Lords: ‘Peers who fail to show up, or vote in less than a fifth of the sittings, should lose their right to vote.’

One would have thought that Olly Robbins, the civil servant behind the deeply flawed customs union partnership scheme rejected by the Brexit Cabinet, would be working closely with Lord Callanan, Minister in the Department for Exiting the EU.

The number of times they have met? Zero. 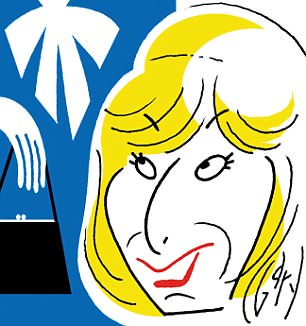 Friends of Margaret Thatcher fear that a five-part TV documentary series about the great leader will be a hatchet job.

The BBC says it will include material from those ‘closest to her — politicians, friends, adversaries, some of the defining faces of the time’.

But why not the Iron Lady’s own family?

Woe betide the producers if they don’t let her formidable daughter Carol have her say.

Sir Bernard Ingham has taken a literary view of the fall of Amber Rudd — comparing the ex-Home Secretary with her namesake in what he calls ‘a risqué novel of my long-lost youth’.

He was referring to the heroine of Forever Amber, who was abandoned pregnant and penniless at the age of 16 but who went on to become Charles II’s favourite mistress.

Writing in the Yorkshire Post, Ingham says: ‘Amber Rudd will forever be known, by my generation at least, as “Forever Amber” because she was forever in the mire. Just one darned thing after another…’

Lib Dem HQ alerted media photographers to the place and time where party leader Sir Vince Cable was due to vote in last week’s local elections.

One problem: Thursday was actually May 3.

No wonder so few take the shambolic Lib Dems seriously.

The conference was called Marx 200.

Dugher asked: ‘Is that the number of people who support this claptrap? Or the number of years it will take Labour to win a General Election?’

How May springs into action

Theresa May may not appreciate her comparison to a jack-in-the-box children’s TV character, but Tory loyalist, Robert Halfon MP, was doing his best to help when asked if she will still be PM at Christmas.

He replied that she was ‘like Zebedee from The Magic Roundabout… Whatever storms come her, way she just jumps out of the box. You have to admire her resilience.’

Halfon should have added that Jeremy Corbyn resembles another figure from the show — Dylan, the dopey rabbit who is forever asleep or eating carrots.