An angler is celebrating today after he equaled a long-standing goldfish record which has been in place for nearly two decades.

Lawrence Clarke, a sales manager, managed to capture a stunning Golden Orfe fish that hit the scales at a sensational 8lb 5oz.

The weight is enough to draw level with the UK current record weight for the species which was set in the year 2000.

The 37-year-old from Sutton, south London, has now officially lodged a claim with the British Record Fish committee and is hoping to be granted a place in the history books. 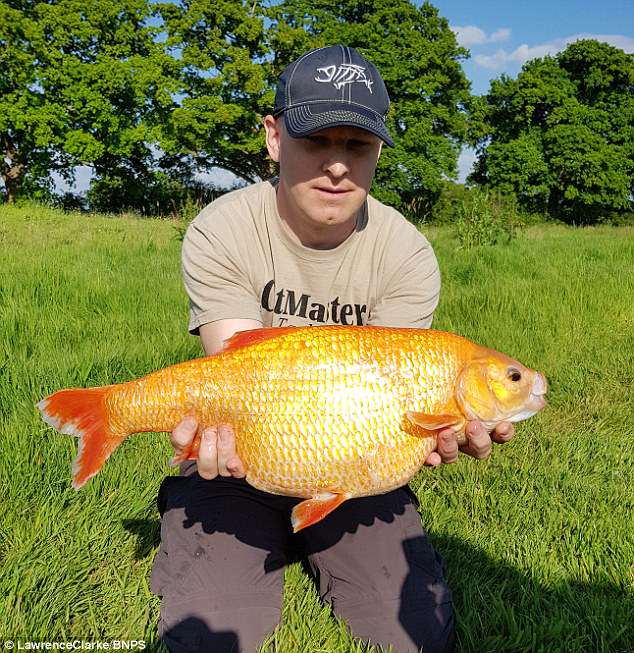 Angler Lawrence Clarke, 37, from Sutton, south London, is celebrating after he equaled a long-standing goldfish record which has been in place for nearly two decades

Lawrence has been angling for decades and claims to have broken a number of unofficial world records overseas.

This will be the first time he’s ever been recognised for such feats however and he says he specifically chose his location with the intention if catching a huge Golden Orfe.

The ornamental fish, similar to large goldfish often found in garden ponds, was caught at Newidgate Farms in Surrey and Lawrence is adamant he always wanted to catch the eye-catching species.

It was caught around an hour before the end of his day-session and was the first orfe Lawrence had captured in over two decades.

After reeling it in, Lawrence weighed the fish, but he did not realise it was a potential record holder until he got home that evening.

Lawrence said: ‘I specifically went there to try and catch orfe as I heard there were potentially some huge ones in there.

‘I never expected a record though and I didn’t even know it was until much later when I got home.

‘It was actually the first time I’ve caught an orfe in 23 years so it was great to get such a fantastic fish.

‘It only took around two minutes to reel in and I’ve now made my claim with the British Record Fish Committee.

‘My scales are currently being assessed but I don’t see any reason why I won’t be announced as the record holder.’

Lawrence, who is one of few anglers to have caught 10 different species of fish over 100lb, now faces an anxious wait as his scales are thoroughly tested.

Mike Heylin, of the British Record Fish Committee, said: ‘I can formally identify from the pictures alone that this is a golden orfe so the only real problem could come from the scale test.

‘Most scales will have some variation in them meaning he has very little wriggle room for this if he does want to claim the record.

‘Whatever happens this is the fish of a lifetime and I’m hoping that nothing comes along that could mess it up as a record breaker for him.’