This is the moment a fisherman thought he had caught a huge fish – only to reel in a human corpse.

The angler, named Safari, was among hundreds of contestants at a match fishing competition on the Citarum River in Bandung, Indonesia, on Sunday afternoon.

He hooked something large but after two minutes of wrestling with what he thought was a large catch – a dead man’s hand pierced the surface.

Safari recoiled in horror after realising that the catch was actually the body of a man that had sunk to the bottom of the river. 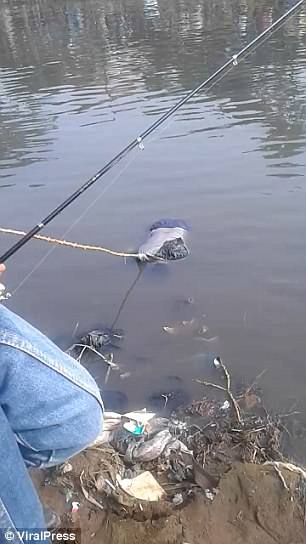 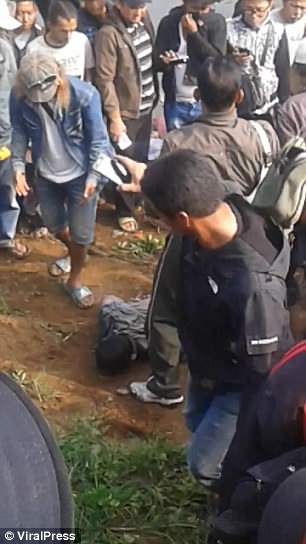 A fisherman thought he had caught a huge fish during a competition –  only to reel in a human corpse. Pictures show the corpse being brought to shore

Police arrived at the event and helped to drag ashore the body of the man, who had curly hair and was wearing blue jogging bottoms and a white t-shirt.

Officers are now trying to identify the person fished from the river and appealing to residents for more information. They believe he had only recently fallen into the river.

Bandung Police Chief Senior Commissioner Indra Hermawan said: ‘The corpse was first discovered by one of the participants in the fishing contest while waiting for his fishing bait to be eaten. 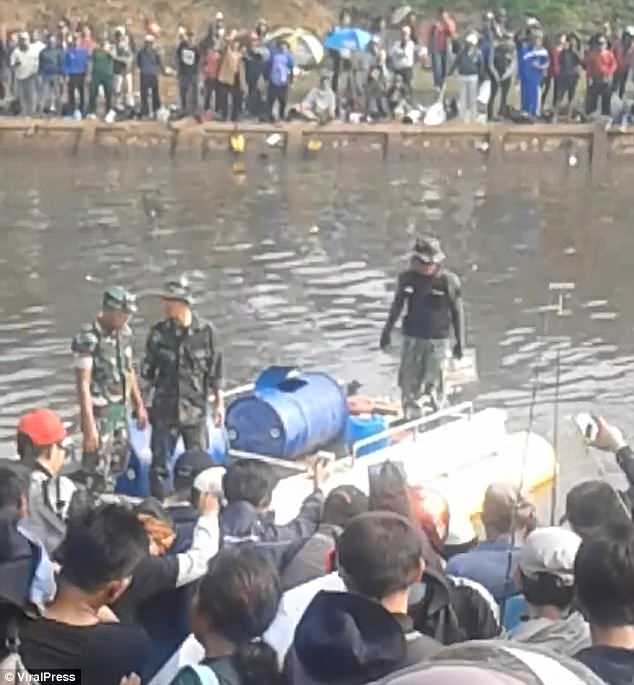 Safari recoiled in horror after realising that the catch was actually the body of a man that had sunk to the bottom of the river. Pictured: Police descend on the scene

Soon, there seemed to be a burden on his hook. The witness though he fish was heavy but actually it was a dead body.

‘The victim has been taken to Sartika Asih Hospital for an autopsy. From the preliminary investigation, what is certain is that there is no trace of violence in the victim’s body.

‘The age was about 20 to 30 years old, he was wearing blue trousers, white shirt and had short curly hair. He was 160cm tall. The corpse was in the water and it had not been floating.’