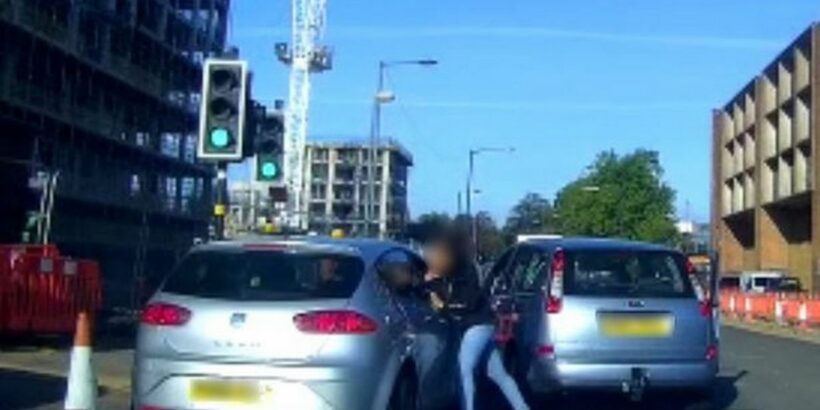 Shocking dash-cam footage shows the moment a woman jumped out of her car and punched another driver after the pair tried to enter a lane at the same time.

The traffic altercation was caught on camera, as another driver sat back and watched the bizarre dispute between a silver SEAT Leon and a blue Ford on Dudley Road, Birmingham.

In the video, the cars can be seen jockeying for position on the road, before the SEAT driver attempted to overtake the Ford which sparked a frenzied attack on September 22.

The woman driver was recorded as she hopped out of her Ford in the rain and marched over to the other car to punch the driver through the open window of her car, reports Birmingham Live.

The driver of Ford then continued to shout and gesticulate at the other driver, also a woman, although audio was not picked up.

As the incident continued, more words were exchanged before the Ford driver snatched the SEAT driver's keys before returning to her car to drive off.

The SEAT driver then had to retrieve her keys off the pavement before being able to leave the scene.

She could be seen pointing and supposedly calling out to the Ford driver as she returned to her car.

The incident took place on the A457 near Birmingham City Hospital.

In recent months there have been several terrifying incidents that have been caught on dashcam footage.

West Midlands Police confirmed they had no records of an incident being reported to them in that road at around that time.