Canada’s protesting truckers have morphed from enablers of capitalism to inhibitors of it. You could just call them jerks. Everybody’s sick of COVID and many are now growing fearful of runaway inflation. What nobody needs is a bunch of anarchists shutting down businesses and triggering new levels of disruption. Yet by the metrics of value destruction, the Canadian protests have been so successful at shuttering Ottawa businesses and halting U.S.-Canada trade that dead-enders may now attempt similar economic sabotage in the United States and elsewhere.

Do the truckers have legitimate grievances? Honestly, who cares. Several analysts have patiently explained why they’re so upset. Canada may have dishonored the truckers by changing their COVID status from essential workers earlier in the COVID pandemic to nobody special. The oppressed truckers now have to abide by vaccination requirements and self-isolate like everybody else. Truckers who used to cross the Canada-U.S. border unaccosted now have to quarantine if they’re not vaccinated. Also, something unintelligible about “freedom.”

If these truckers deserve any sympathy at all, they’re way at the back of the line. Here are some folks who do have legitimate COVID grievances: Hospital workers who have to deal with a surge in COVID patients too irrational to protect themselves with inoculations. Parents of young kids, mothers especially, whose lives are in turmoil because of school chaos. Retail workers trying to enforce government masking rules who get bullied by anti-mask snowflakes. The many service workers struggling to get by in fields still ravaged by COVID. 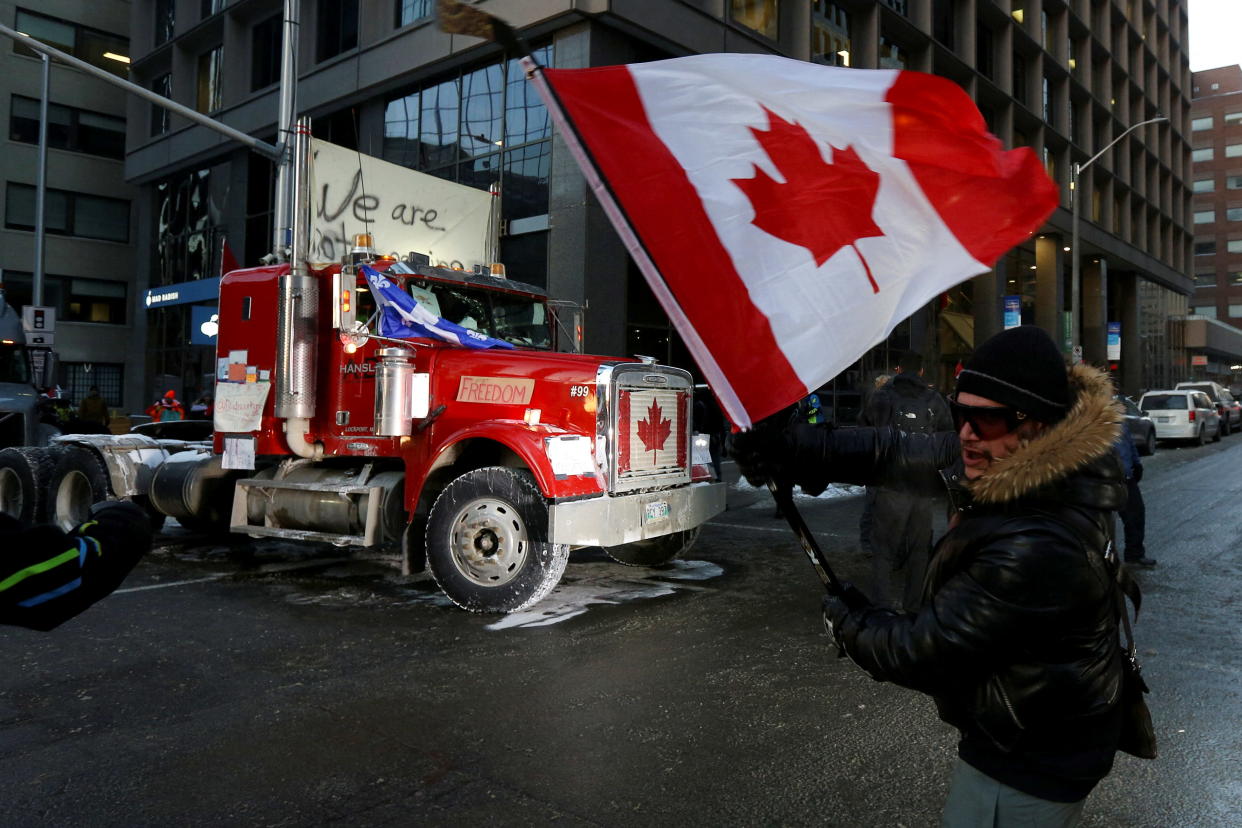 The protesting truckers think they’re special. They’re not. But we do tend to puff up certain types of workers with phony praise when it’s convenient. Early in the pandemic, we lionized “essential workers” at grocery stores, health care facilities, fire and police stations and even auto dealerships for going to work and keeping part of the economy running. Truckers, too. But we rarely offered them anything more than applause, and in reality, most essential workers were normal people simply doing their jobs. The angry truckers seem to feel more entitled than their fellow essentials, and unaware that “back to normal” means their special status needs to end.

Canadian authorities are handling the truckers delicately, even though many are breaking the law by blocking roads and bridges and bringing commerce to a standstill. Canadian Prime Minister Justin Trudeau and local leaders in Ottawa doubtless want to avoid provocations that rouse angry-trucker sympathizers and make the problem worse. But they could turn public opinion against the truckers and neutralize the problem with a slightly different strategy.

Many Canadians and Americans share the truckers’ COVID fatigue. On that, there’s no compelling case against them. The real problem with the protests is they’re shutting down economic activity at a perilous time in some of the very sectors they’re targeting. The auto industry is the most important. There’s already a dearth of new vehicles because of semiconductor shortages and other supply-chain problems. New-vehicle inflation in the United States is 12%, and the scarcity of new vehicles has sent the price of used ones skyrocketing by 41%. The angry truckers have shut down the main bridge carrying finished vehicles and components between the U.S. and Canada. This can only worsen production problems.

The angry truckers are also making it impossible for hundreds of businesses in Ottawa to operate. These include many smaller businesses that don’t have the cash draw to shut down indefinitely. The truckers are harming the livelihoods of ordinary workers, and it may not be too strong to call them economic terrorists. If you’re with the truckers, you’re pro-inflation, anti-prosperity, anti-work and in reality, anti-freedom.

Should similar protests erupt in the United States, there are obvious worries about escalation into overt violence and some sort of repeat of the Jan. 6, 2021 attacks on the U.S. Capitol. But this may be an overblown concern. Here in the United States, we’ve been coping with misguided “freedom” fighters from the beginning of the COVID pandemic, including a standoff with armed militias at the Michigan statehouse in 2020, and the wackadoodle plot to kidnap Michigan Gov. Gretchen Whitmer. Thousands of Americans with a lot more time on their hands than most working parents have protested mask mandates, school and business shutdowns and most other efforts to combat COVID, in most states. It seems more likely that American truculence has migrated to Canada, rather than the other way around.

Besides, there’s not much left to protest. Even the most restrictive blue states are now lifting mask mandates, as Omicron infections decline. The Supreme Court squashed President Biden’s effort to require vaccines for workers at big companies, leaving employers to make their own decisions on that issue. Even Dr. Anthony Fauci, the scourge of right-wing COVID deniers, says the pandemic could be on its way to ending and the nation getting back to normal. Any trucker trying to shut down the economy is standing in the way of that, and blocking progress. Everybody else needs to tell them: Get out of the way.

Rick Newman is a columnist and author of four books, including "Rebounders: How Winners Pivot from Setback to Success.” Follow him on Twitter: @rickjnewman. You can also send confidential tips.