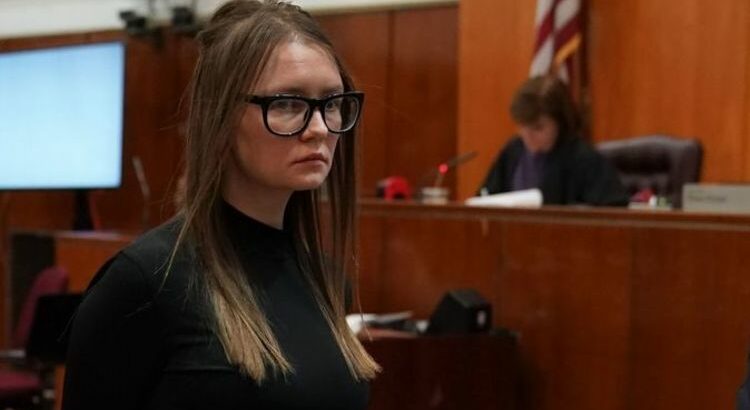 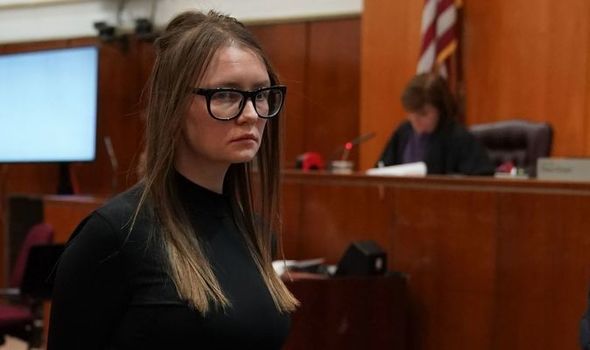 The German heiress with a £50million trust fund in Swiss banks stayed at only the finest hotels, chartered private jets and filled her wardrobe to overflowing with designer clothing. Blue-eyed with long lashes and cascading chestnut hair, she dispensed $100 tips and thought nothing of sending a bottle of 1975 vintage Dom Perignon champagne to hotel staff as a small token of her gratitude.

She hosted lavish dinner parties for Manhattan’s art world glitterati at NewYork’s swankiest restaurants and hired a personal trainer to help her work off the calories afterwards.

But it was all a lie. The Teutonic tycoon was in reality Russian truck driver’s daughter Anna Sorokin, a penniless con artist who grew up near Cologne and posed as a patron of the arts to embezzle a fortune from high society friends and five star hotels across the globe.

Her escapades, which took her from boutique hotel suites to a stark cell in New York’s Albion Correctional Facility, are recounted in a new ten-part Netflix series Inventing Anna, which starts next week starring Ozark’s Julia Garner.

HBO is also developing a TV series about the shameless swindler’s exploits, written by Girls creator and star Lena Dunham.

“The thing is, I’m not sorry,” said Sorokin in 2019 after she was sentenced to a prison term of four to 12 years. “I’d be lying to you and to everyone else and to myself if I said I was sorry for anything.”

Branded a sociopath, she said: “I actually see it as a compliment,” and confessed in a rare moment of honesty: “I’m not a good person.”

Sorokin, 31, embezzled more than £147,000 out of friends, hotels, airlines and personal trainers and tried to con investors into loaning her £18million, prosecutors claimed. “This is the most traumatic experience I’ve ever been through,” the jury was told by Rachel Williams, a friend fleeced by Sorokin.

“I wish I had never met Anna. If I could go back in time, I would. I wouldn’t wish this on anybody.” Sorokin’s exploits became a Rorschach test: to some she was an amoral scam artist; to others she embodied the American Dream, embracing her constitutional right to the pursuit of happiness.

She also demonstrated how easy it could be to scam the socialites and institutions that covet access to the rich and famous, if only one attempted a larger-than-life con.

Sorokin was a London art student dropout and Paris magazine intern who came to New York in 2013, inventing her fake identity as Anna Delvey to lure Manhattan’s wealthy with her wildly ambitious vision for a private arts club, modestly to be named The Anna Delvey Foundation.

“My motive was never money,” she told the New York Times. “I was power hungry.”

Yet perhaps it was the hunger for power, money and influence in Manhattan’s haut monde that seduced so many of Sorokin’s wealthy victims to trust her. Her dream of a $40million private club attracted the interest of New York’s elite: property developer Aby Rosen, British entrepreneur Roo Rogers, London’s Chiltern Firehouse hotelier André Balazs and architect Gabriel Calatrava, lending a patina of respectability to Sorokin’s scam.

Meeting Chinese art collector Michael Huang in 2015, she had him buy them both tickets and hotel rooms for the Venice Biennale art festival in Italy, promising to repay him.

“She showed up in a black dress and looked really fashionable,” he recalls. “She always wanted to party.”

Yet Huang was one of the lucky few who received some reimbursement by Sorokin after months of demands, leaving him only £2,200 out of pocket.

But when arts club investors failed to materialise Sorokin returned to Germany, where she created fake bank statements purporting to show she was worth millions.

These she used in 2017 in an attempt to secure a £16million bank loan in New York. She succeeded only in winning a £75,000 interim loan, which she lavished on hotels and designer clothing by Yves Saint Laurent and Gucci.

Posing as an heiress with a bottomless trust fund she chartered a private jet on non-existent credit, and lured hotels into putting her up without a credit card, flitting from one to the next as bills came due.

When New York’s 11 Howard hotel demanded payment she sent a £2,000 bottle of vintage champagne to the concierge desk to keep them happy.

Sorokin had no compunction about swindling her friends either. She invited three of them, including her £220-an-hour personal trainer, to join her on a trip to a private villa at the famed La Mamounia hotel in Marrakech, Morocco, in 2017, promising to pay all their expenses.

She even hired a videographer to film their travels. But when La Mamounia rejected Sorokin’s credit cards, she had her friend, former Vanity Fair photo editor Rachel Williams, pay the $62,000 bill – around £45,000 – promising to quickly reimburse her.Williams was never repaid.

“She walked into my life in Gucci sandals and Céline glasses, and showed me a glamorous, frictionless world of hotel living and Le Coucou dinners and infrared saunas and Moroccan vacations,” Williams told Vanity Fair. “And then she made my $62,000 disappear.”

Even behind bars she maintained her diva ways, tearfully refusing to attend a court hearing because she hated the clothes picked out by her personal stylist. Sorokin claimed she had only been trying to get ahead. “Through her sheer ingenuity, she created the life that she wanted for herself,” her lawyer Todd Spodek told the jury.

“Anna was not content with being a spectator, but wanted to be a participant. Anna didn’t wait for opportunities, Anna created opportunities. Now we can all relate to that. There’s a little bit of Anna in all of us.”

Even if the jury privately agreed, they still convicted her of larceny and theft of services, though she was acquitted of stealing from Williams and of trying to steal £18million from a bank.

Despite being imprisoned for up to 12 years, and being far from a model inmate – she was disciplined 30 times for fighting and disobeying orders, spending time in solitary confinement as punishment – Sorokin was released in February 2021 after barely four years behind bars.

For a brief moment she was living it up again, pictured on social media sipping champagne in a claw-footed bathtub, and shopping in New York. But the following month she was detained by US immigration agents for overstaying her visa, and held in detention for months while fighting deportation.

Her lawyer refused to say if Sorokin remains incarcerated. Even the coming Netflix series has landed her back in legal trouble. Sorokin was paid £236,000 for the rights to her story by Shonda Rhimes, producer of hit TV series including Grey’s Anatomy and Scandal.

But New York’s attorney general sued Sorokin in 2019 to freeze her payments under a law preventing criminals profiting from their crimes.

Sorokin’s windfall instead went to her creditors, as will any of her future royalties.

Yet she still hopes for another chance at the American Dream: writing a book, selling Anna Delvey merchandise and demanding £5,500 per interview.

“I’m just trying to rewrite my story,” she says.

But will anyone believe her?