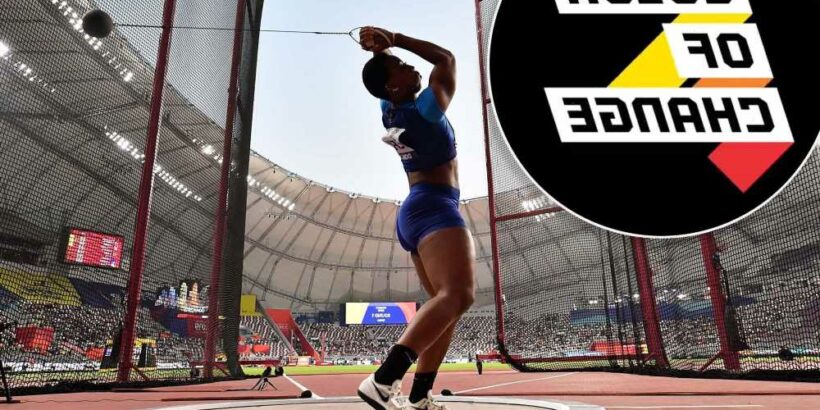 US Olympian insists national anthem is ‘disrespectful’ to black Americans

Gwen Berry shouldn’t be on US Olympic team after turning her back on flag, Cotton says

Olympic athlete Gwen Berry — who sparked outrage by turning away from the US flag during the national anthem while on the winner’s podium — is being sponsored by an activist group that is also fighting to defund the NYPD.

The group said it was also proud to have “negotiated a sponsorship” with Puma for the controversial hammer thrower as well as “continue to push corporations to support Black athletes who speak out for our communities.”

“Grateful for Gwen’s leadership today and every day,” the group tweeted.

The group also used Berry’s case to push a petition calling to overrule an Olympic rule banning “athletes from kneeling, raising their fists, or wearing signs or symbolic armbands.”

“The policy is extremely problematic because as we know, ‘taking a knee’ and ‘raising fists’ are directly associated with justice for Black people,” the petition argued, calling it a “direct attack on athlete activists like gold medalist Gwen Berry” who has previously raised her fist at events.

“Activist athlete” Berry, 31 — who said she was “pissed” that “The Star-Spangled Banner” played as she got bronze at the Olympic trials Saturday — responded to the group’s support with a fitting emoji of a raised fist.

“Thank you Color of Change for always standing with me,” she wrote.

As well as fighting the Olympic rules, the California-based group has become known for pushing “defend the police” policies — most recently targeting New York’s finest.

“Policing is a violent institution that must end,” Color of Change’s president, Rashad Robinson, has said in a statement.

“We imagine a country where there is enough money to educate our children, care for our sick and feed those who are financially unstable. Defunding the police allows for this vision,” Robinson said.

The group’s most recent campaign and petition aims to “Take ACTION to Divest in NYPD” after the city council budget.

“The NYPD has waged war against Black people and communities of color in NYC. And the only way to stop police violence is to stop siphoning tax dollars to the NYPD and invest in the material conditions that actually impact the safety of our communities,” the petition reads.

A letter to City Council members also says that “black people and communities of color in NYC are being terrorized by the police.”

“The only way to diminish police violence is to divest from the institution of policing. To put it plainly: we won’t allow the NYPD to loot our communities any longer,” the petition letter says.

“De Blasio has let the NYPD use their riot gear to terrorize protestors,” the petition complained, complaining about the force’s “arsenal of chemical weapons, tanks, sniper units, surveillance towers, and sound grenades” making the NYPD “look more like an army prepared for war than a city police department.”