Chef, writer and television host Anthony Bourdain has reportedly been cremated in France, just days after he died by suicide.

Bourdain’s ashes will be flown back to the United States on Friday, a source told People Magazine.

At the same time, the Parts Unknown star’s girlfriend Asia Argento was seen with Rose McGowan and two other friends, listening to the song ‘Jesus Was a Cross Maker’ by Judee Sill, a singer who died by suicide at age 35.

The actress also shared a picture of her back, where the word saved was superimposed.

Days after Bourdain’s death, Argento shared her grief on social media, calling him an inspiration and herself ‘beyond devastated’. 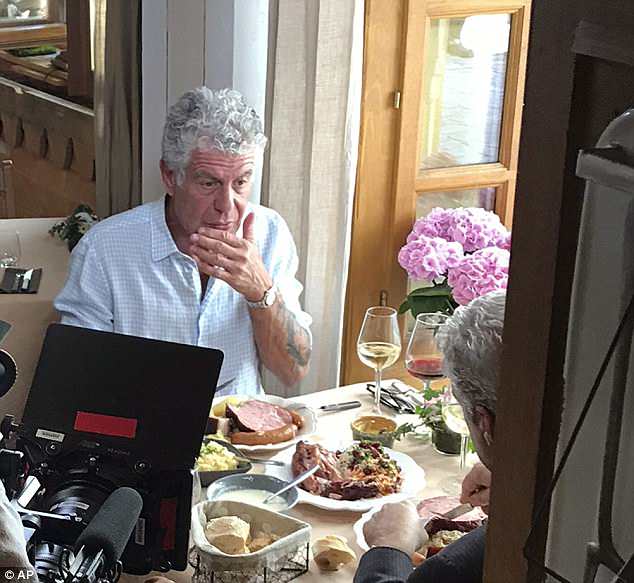 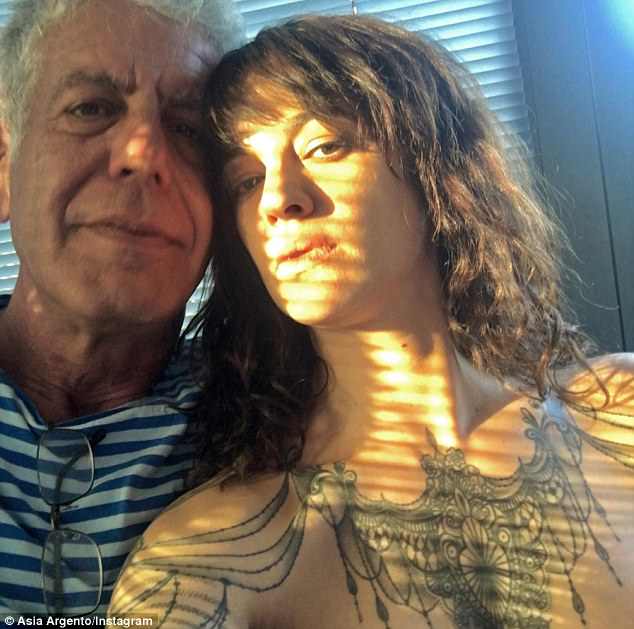 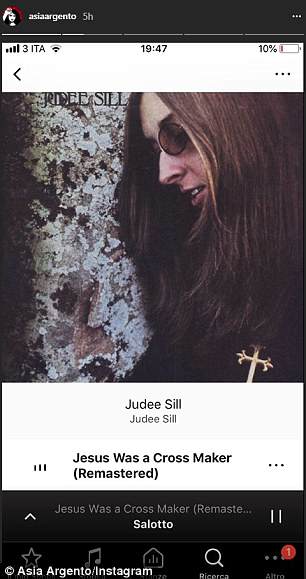 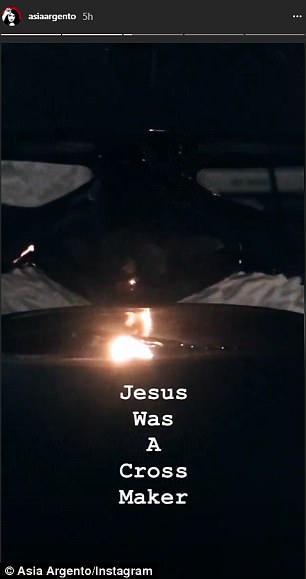 She shared pictures of herself listening to Jesus Was a Cross Maker, a song performed by a woman who committed suicide at the age of 35, on the same day her boyfriend was cremated 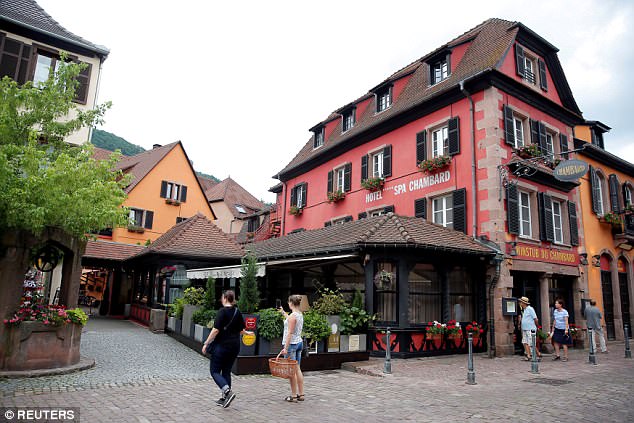 The 61-year-old was found dead on Friday, having hung himself in his hotel room in France (pictured is the Le Chambard Hotel where he was staying)

‘Anthony gave all of himself in everything that he did. His brilliant, fearless spirit touched and inspired so many, and his generosity knew no bounds. He was my love, my rock, my protector. I am beyond devastated. My thoughts are with his family. I would ask that you respect their privacy and mine,’ Argento wrote.

On Sunday, his mother Gladys told Page Six the family were awaiting approval from the French Government to return Bourdain’s body to America, and were expecting it to take a few days. 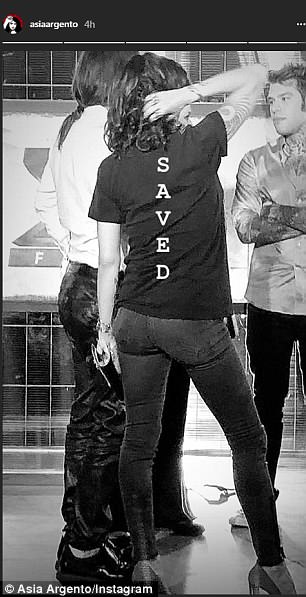 The Parts Unknown host, 61, was found dead in his room at the Le Chambard hotel in France on Friday after hanging himself.

Friend Eric Ripert, who had been helping the father-of-one make an upcoming episode of his show, was the one to make the grim discovery.

He went to Bourdain’s hotel room after he did not attend dinner or breakfast, which they were scheduled to eat together, where he found his friend had hanged himself.

Christian de Rocquigny, the prosecutor of Colmar in France’s eastern Alsace region, said on Saturday there did not appear to be much planning ahead of Bourdain’s suicide.

‘There is no element that makes us suspect that someone came into the room at any moment,’ he said, adding a medical expert had concluded that there were no signs of violence on Bourdain’s body.

Rocquigny said toxicology tests were being carried out on Bourdain’s body, including urine tests, to see if he took any medications or other drugs, in an effort to help his family understand if anything led him to kill himself. 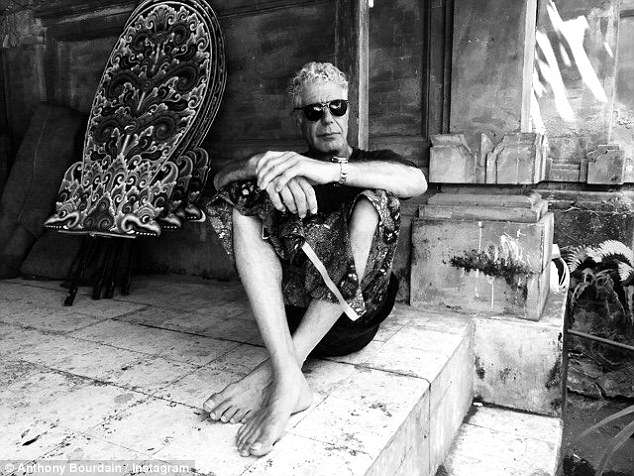 Bourdain’s funeral will be organised by his ex-wife, Ottavia, as she is still legally his next of kin, his mother Gladys has claimed.

‘Although they’re separated, she’ll be in charge of whatever happens,’ she said on Sunday.

‘We haven’t talked for a couple days. I’m sure she’s as broken up as I am.’ 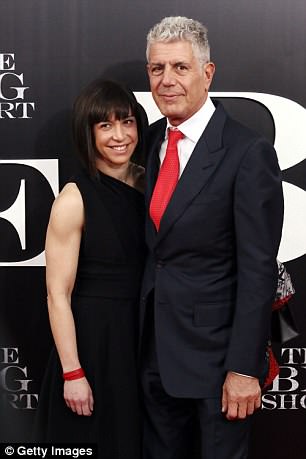 Ms Bourdain said she ‘never would have dreamed’ her son would commit suicide, though she knew he was in a bad place mentally in the days leading up to his death.

His mother told The New York Times Ripert had contacted her and said Bourdain had been ‘in a dark mood these past couple of days’, but she said she still never saw his suicide coming.

But the celebrity chef opened up about his history of destructive behavior, including regular thoughts of suicide following the destruction of his marriage, in his 2011 book Medium Raw.

After his first marriage to wife Nancy Putkoski ended in 2005, Bourdain recalled being ‘aimless and regularly suicidal’.

During a stint in the Caribbean, he wrote of getting ‘the kind of drunk where you’ve got to put a hand over one eye to see straight’ and would ‘peel out’ in his 4×4 for nightly trips to the brothels.

Bourdain had also previously been open about his past struggles with drugs and spoke of being a recovering heroin addict. 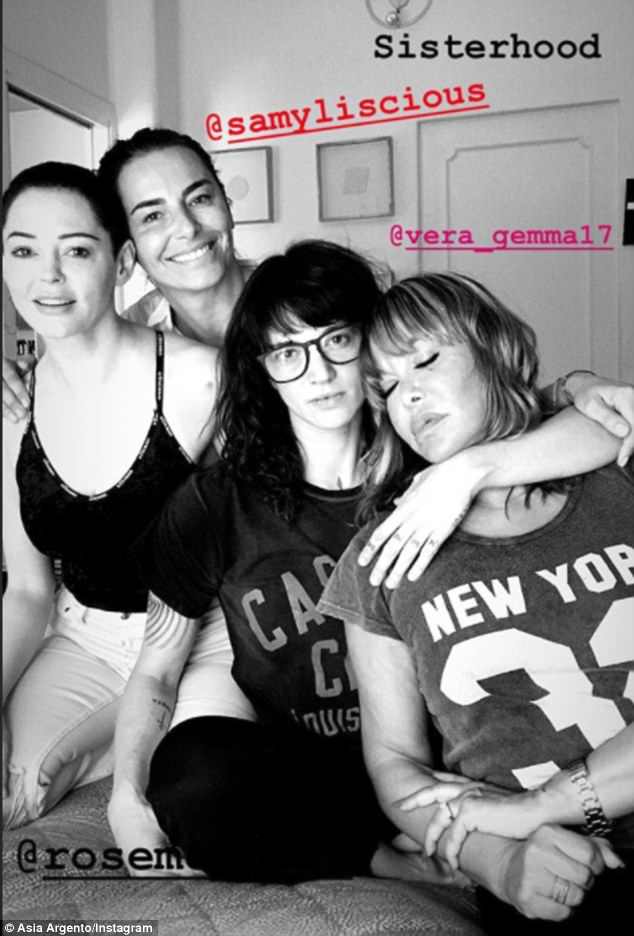 In addition to the celebrity chef’s feats in the culinary world, he was also hailed for being one of the loudest male voices in the #MeToo movement.

Bourdain’s girlfriend Asia Argento, is the Italian actress who has accused Harvey Weinstein of rape.

In an essay written after fellow chef Mario Batali was accused of sexual assault, Bourdain wrote that ‘one must pick a side … I stand unhesitatingly and unwaveringly with the women.’

Argento wrote on Twitter on Friday that Bourdain ‘was my love, my rock, my protector.’

For confidential help, call the National Suicide Prevention Lifeline at 1-800-273-8255 or click here

For confidential support on suicide matters in the UK, call the Samaritans on 08457 90 90 90, visit a local Samaritans branch or click here

For confidential support in Australia, please call Lifeline on 13 11 14 or click here 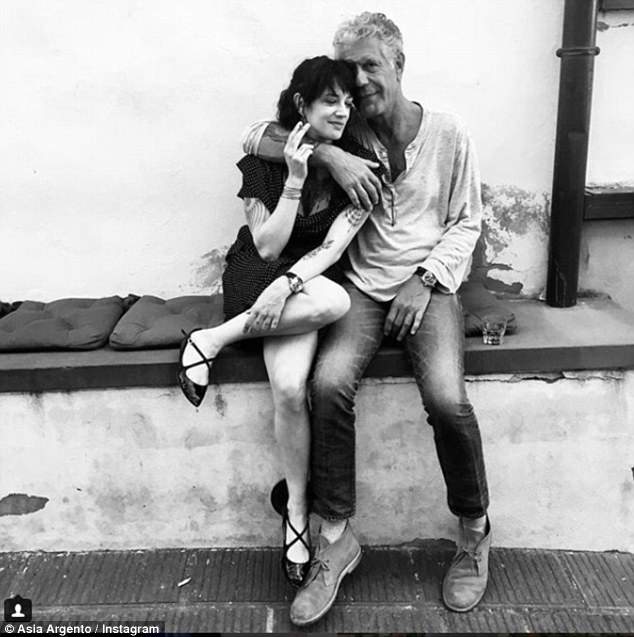 Bourdain, a father-of-one, was loud voice in the #MeToo campaign and was in a relationship with actress Asia Argento, who has leveled sexual assault claims towards Harvey Weinstein