Washington: Drugmakers will likely have tens of millions of doses of coronavirus vaccines in the early part of next year, with production ramping up to a billion doses by the end of 2021, Anthony Fauci, the top US infectious diseases official, said in a Reuters interview on Wednesday.

Fauci said he is hopeful the world could get past the pandemic that has claimed more than 700,000 lives worldwide by the end of next year with the help of a vaccine. 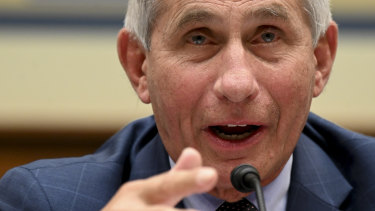 Anthony Fauci, director of the National Institute of Allergy and Infectious Diseases.Credit:Bloomberg

"Do I think we're going to have a much much better control one full year from this winter? I think so."

"Historically, if you get a vaccine that has a moderate to high degree of efficacy, and you combine with that prudent public health measures, we can put this behind us."

"I don't think we're going to eradicate this from the planet … because it's such a highly transmissible virus that that seems unlikely."

"But what I think we can do with a combination of a good vaccine and attention to public health measures – and by attention I don't mean shutdown, I mean things that are just prudent – then I think we can get this behind us."

"We may need to go through a season of it, and then by the next season if we have a vaccine it won't be a pandemic, it won't be immobilising the world, it won't be destroying the economy."

Fauci said he has not seen any pressure from the White House to announce a successful vaccine close to the November 3 election in the hopes of boosting President Donald Trump's re-election chances.

Fauci said health regulators have promised "they are not going to let political considerations interfere" with the approval of a COVID-19 vaccine.

"The subject obviously comes up, and the people in charge of the regulatory process assures that safety and efficacy is going to be the prime consideration."

Fauci's interview with Reuters came on the same day Trump said in an interview with Fox News that the virus is "going away. It will go away like things go away."

Fauci offered a more mixed assessment, saying some parts of the country had done well in containing the spread of the virus, while others were "on fire."

He characterised the varying responses to the virus as "disjointed" – owing to the size and the diversity of the nation.

"I hope, and feel it's possible, that by the time we get through 2021 and go around for another cycle that we'll have this under control," he said.