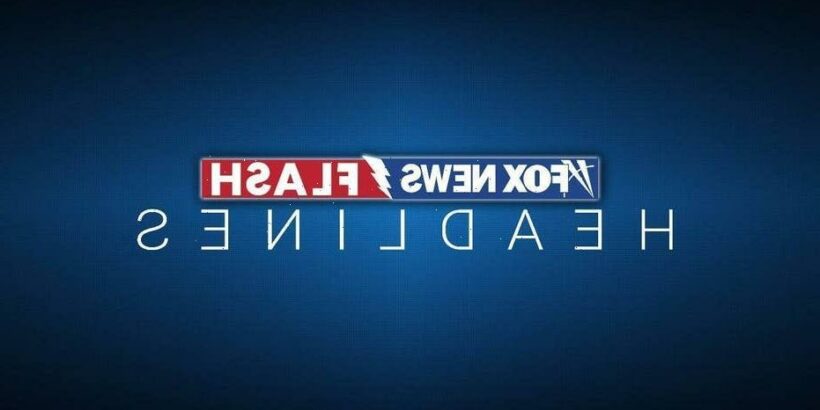 Far-right activist Nick Fuentes organized the protest against vaccine mandates outside Gracie Mansion, where Antifa groups turned out to confront his group, the “Groyper Army.”

“Like the alt-right and other White supremacists, Groypers believe they are working to defend against demographic and cultural changes that are destroying the “true America —  a White, Christian nation,” the ADL’s website states.

The event comes amid a wave of anti-vaccine mandate protests in New York City and around the country. 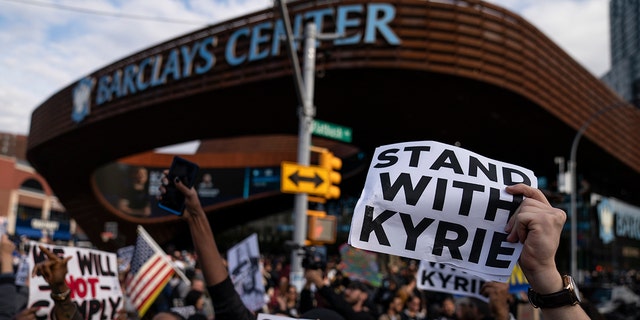 Protesters rallying against COVID-19 vaccination mandates and in support of basketball player Kyrie Irving gather in the street outside Barclays Center before a game between the Brooklyn Nets and the Charlotte Hornets, Sunday, Oct. 24, 2021, in New York. (AP Photo/John Minchillo)

United Against Racism and Racism NYC posted a “Call to Action!” Friday night, urging supporters to confront the White nationalists who planned to show up this weekend.

“Saturday, 11/13, 4pm, 86th/East End Ave. Nick Fuentes and all White nationalists out of NYC!! Defend the BLM memorial vigil! Come with a buddy,” the group tweeted.

One independent journalist on Twitter recorded a confrontation between the two sides during the protest, including one person called the anti-vaccine mandate protesters “Nazi scum.”

“Stop acting tough, bro,” one person was heard shouting to an America First protester at the event.

Additional video from the protest shows police officers forming a barricade between the two sides.

A representative for Antifa did not respond to Fox News.

It was at least the second time in as many weeks that the COVID vaccine mandate has drawn protesters to Grace Mansion, home of the city’s mayor.

Protesters gathered outside the home Oct. 28 to protest the mayor’s vaccine mandate, which required first responders to receive at least one dose of the vaccine by Oct. 29 or take leave without pay.

“We worked through this pandemic,” an FDNY officer in his 50s, who requested anonymity due to department policy, told Fox News at the time. “Many of us got sick at that time. There was no vaccination. We put our families at risk. We put ourselves at risk. 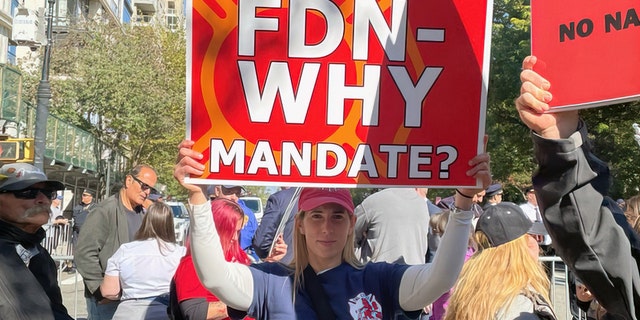 On Oct. 25, a protest by New York City municipal employees shut down the Brooklyn Bridge.

The city’s famed Times Square was swarmed by thousands of protesters opposing the COVID-19 vaccine mandate in September. 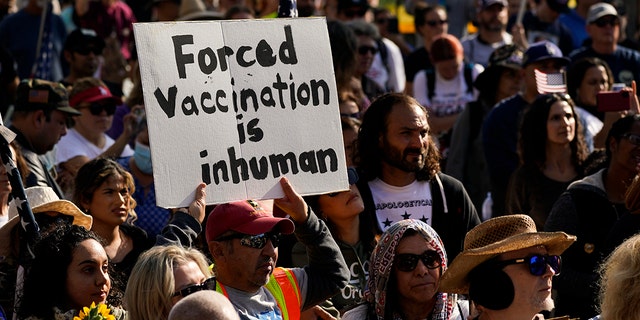 People listen to a speaker at a rally to protest the city’s new vaccine mandate on Monday, Nov. 8, 2021, in Los Angeles. (AP Photo/Jae C. Hong)

The New York City Police Department did not respond to a request for comment from Fox News about Saturday’s protests.