Detectives share pictures of appalling injuries suffered by woman, 79, who was carjacked and dragged along the ground in Morrisons car park as robber sped off in her car

These are the appalling injuries a 79-year-old woman suffered after she was carjacked and dragged along the ground as the coward sped off.

Beryl Allsop had been shopping at Morrisons supermarket on Tweedale Way, Chadderton, Greater Manchester, when she was targeted just before 9pm.

She suffered serious head and facial cuts and is being treated at Manchester Royal Infirmary where she remains in a stable condition. 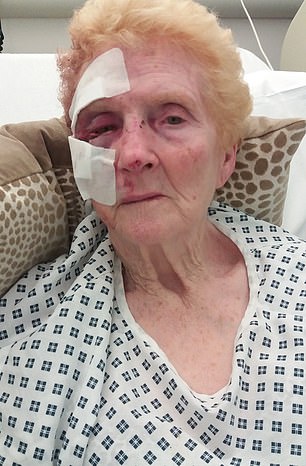 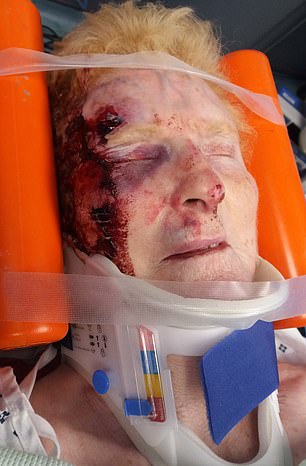 The man grabbed her keys and stole her blue Vauxhall Astra, which has not been recovered.

Police visited the store to obtain CCTV in a bid to identify the culprit. They are also checking footage from roads approaching the store in case the thieves arrived in a vehicle. 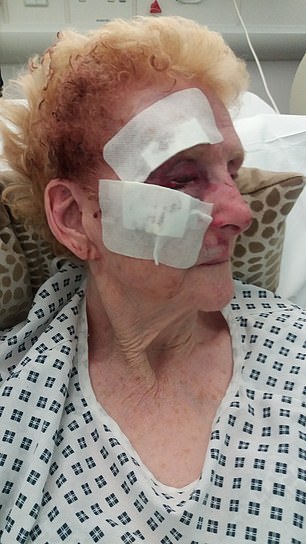 The victim was near a section of the store’s car park to the left of the building, near the front doors when the thief struck on Tuesday evening.

Detective Sergeant Alex Wilkinson, of GMP’s Oldham borough, said: ‘Beryl received particularly nasty injuries in this incident, and she has been left terrified by what has happened to her.

‘The man responsible for preying on an elderly woman is an absolute coward and we are doing everything we can to find him, but we need the public’s help.

‘We are keen to hear from anyone who was in the area of Morrisons car park around 9pm on Tuesday evening who saw anyone acting suspiciously.

One shopper at Morrisons said: ‘It’s an awful thing to do. They are scumbags, and it is not even a prestige car.’

Police say they are investigating the crime as ‘a priority’ and it has been passed to a team of detectives attached to Operation Gladiator – an operation set up specifically to tackle robberies in the Oldham area.

One theory is that the vehicle may have been taken for use in a robbery in the run-up to Christmas.