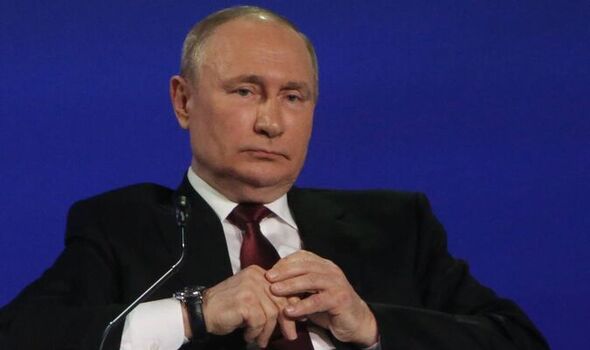 At least 13 people were killed and 50 injured by the “crime against humanity” in Kremenchuk, central Ukraine. The Prime Minister said the blitz showed “once again the depths of cruelty and barbarism [to which] the Russian leader will sink. Once again our thoughts are with the families of the innocent victims.”

President Volodymyr Zelensky declared: “It is impossible to even imagine the number of victims. It’s useless to hope for decency and humanity from Russia.”

Ukraine’s leader, inset below, said that the complex had been “no threat to the Russian army” and had “no strategic value”. He accused Russia’s Vladimir Putin of sabotaging “people’s attempts to live a normal life, which make the occupiers so angry”.

They condemned “the abominable attack on a shopping mall. We stand united with Ukraine in mourning the innocent victims.

“Indiscriminate attacks on innocent civilians constitute a war crime. President Putin and those responsible will be held to account. We will not rest until Russia ends its cruel and senseless war.”

Dmytri Lunin, head of the Poltava regional administration which covers the city of Kremenchuk, called the destruction a “crime against humanity”.

He said: “A missile strike on a shopping mall with people in Kremenchuk is yet another military crime by the Russians. A crime against humanity. This is an obvious, cynical act of terror against peaceful civilians.

“Russia is a terrorist state. Rescuers and policemen are working at the site. The number of victims is impossible to count.” 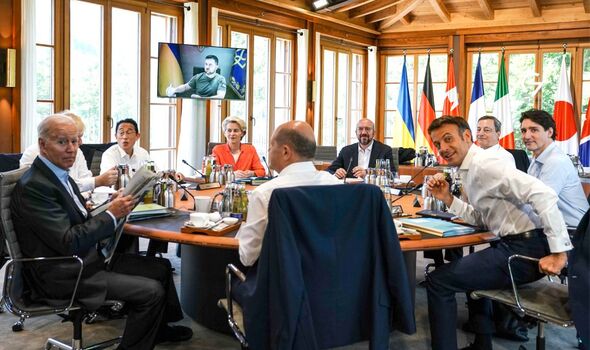 Shoppers who had escaped the carnage joined firefighters back inside the burning wreckage, trying to find survivors. One rescuer braved clouds of choking black smoke to yell: “Is anyone alive? Anyone alive here?”

As flames ripped through the ruins, one stunned witness was heard saying: “This is it! The walls are collapsing!”

Mr Johnson said: “Putin must realise that his behaviour will do nothing but strengthen the resolve of the UK and every other G7 country. We will stand by Ukraine for as long as it takes.”

Andrii Yermak, Ukraine’s presidential administration head, said: “[Russia] said they would be hitting centres of decision making. Even the most sick imagination would not have guessed they mean shopping centres by this.”

After Russia had bombarded Ukraine’s capital Kyiv on Sunday, Mr Johnson told G7 leaders meeting in Germany that it was “stupid of Putin to do something like that when all of us are in the same place because it is only going to make us feel more resolute and united”.

Kremenchuk is home to Ukraine’s largest oil refinery and 217,000 people lived in the city before Putin invaded.

“There are no women by the shopping centre, though at this time of day shopping centres are filled with females. We see mainly young men of similar age, and no panic. There is a feeling of a crowd of ‘extras’, similar to football fans.

“Conclusion: there is a sense they set it up themselves.”

Elsewhere, Russian troops led an all-out assault on the last Ukrainian stronghold in the eastern Luhansk region, “pouring fire” on to the city of Lysychansk from the ground and the air, the local governor reported.

Serhiy Haidai said at least eight civilians were killed and 21 wounded as they queued for water.

The onslaught is part of a bid to wrest the broader Donbas region from Kyiv’s control in what western observers say has become the latest goal of Putin’s war on Ukraine, now in its fifth month.

Meanwhile, a Russian military command position set up in a school has reportedly become the first target struck by US-supplied medium-range Himars missiles.

The attack was in Izyum in the Kharkiv region where Ukraine officials said more than 40 troops from the 20th Army of the Russian Armed Forces’ Western Military District, unit 89425, “were demilitarised”.

Russia confirmed the 43-mile range US missiles were used but claimed they had blasted a hospital.

A second Himars strike is also said to have killed Russian paratroop colonel Andrei Vasilyev, 49 – the 56th such senior official apparently lost in the conflict.

Nato is to make clear Russia is the “most significant and direct threat” to global security, as its leaders gather. Boris Johnson will join the UK’s allies in Madrid tonight for talks which will decide the response to Russia’s invasion.

Secretary general Jens Stoltenberg said the summit would be “transformative” for Nato, as its high-readiness response force soars from 40,000 to more than 300,000.

“Allies consider Russia as the most significant and direct threat to our security.” The plan will also address China and “challenges that Beijing poses to our security, interests, and values”.

Nato will agree a more aid for Ukraine – secure communications and anti-drone systems – and consider Sweden and Finland’s bids to join in response to the threat from Russia. Turkey’s President Recep Tayyip Erdogan has concerns but is due to meeth both countries.

Britain must be prepared to “fight and win” to prevent the spread of war in Europe, the new head of the Army will warn today.

Gen Sir Patrick Sanders, Chief of the General Staff, will say he has not seen such a clear threat to peace and democracy as Putin. He will liken the crisis to the run-up to the Second World War, saying the UK must be ready to “act rapidly” to prevent a full-scale conflict.

He will address a conference organised by the Royal United Services Institute think-tank.