Apple CEO Tim Cook has taken another swipe at Facebook’s handling of user data during a speech to Duke University students.

Delivering the commencement address at the North Carolina college, Cook did not mention Facebook by name but appeared to obliquely reference the social media firm’s privacy scandal.

Cook, however, emphasized at Duke that Apple did things differently, explaining: ‘We reject the excuse that getting the most out of technology means trading away your right to privacy.’ 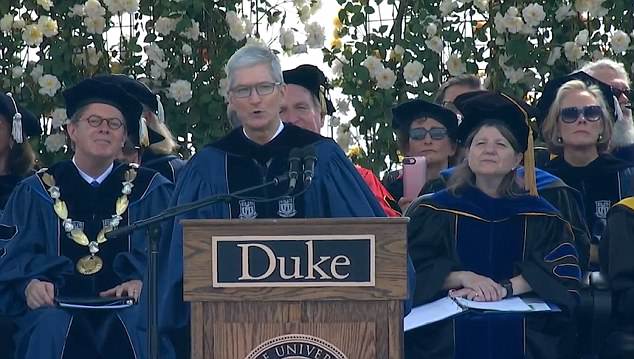 Cook emphasized at Duke that Apple did things differently, explaining: ‘We reject the excuse that getting the most out of technology means trading away your right to privacy’

He added: ‘So we choose a different path, collecting as little of your data as possible, being thoughtful and respectful when it’s in our care because we know it belongs to you.’

When asked what he would do if he were in Zuckerberg’s shoes, Cook replied: ‘I wouldn’t be in this situation.’

He added: ‘The truth is, we could make a ton of money if we monetized our customer — if our customer was our product. We’ve elected not to do that.’

But Zuckerberg hit back, saying: ‘You know, I find that argument, that if you’re not paying that somehow we can’t care about you, to be extremely glib. And not at all aligned with the truth.’

Cook told the Duke students they could be the solution to the epidemic of data abuse in American society. 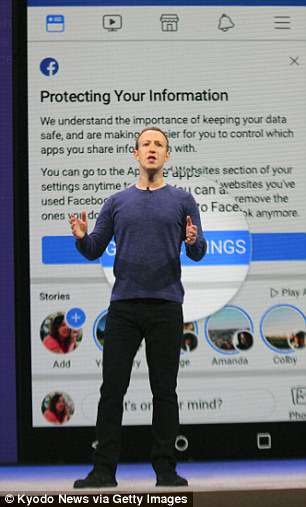 He told them: ‘We are not powerless in the face of these problems

‘You are not powerless to fix them. No generation has ever had more power than yours.

‘And no generation has a chance to change things faster than yours can.’

He went on to praise Apple co-founder Steve Jobs for instilling the firm with his philosophy.

He added: ‘Because Steve taught us that’s how change happens and from him I learned to never be content with the way that things are.’

But Apple has previously been criticized itself, particularly for its relationship with the authoritarian communist regime in the People’s Republic of China.

The firm announced in February it was planning to move iCloud accounts registered in China to state-run servers.

In 2014, meanwhile, hackers were able to access private photographs belonging to celebrities before posting them online.