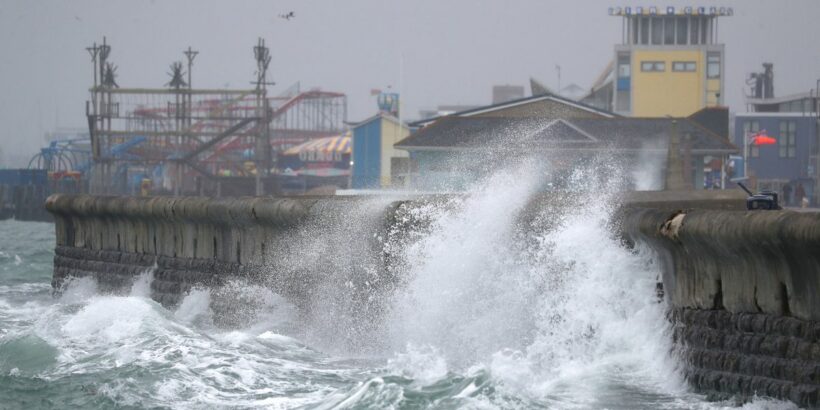 An Arctic storm sweeping in from Iceland threatens to bring 65mph gusts and heavy downpours.

Met Office forecasters warn gales and rain will hit the north-west from Tuesday, which could further spread to other parts of the UK from Thursday.

Official British Summer Time (BST) will start next weekend, as the strong winds are set to sweep the north-west, and up to 50mph gales in the south and Midlands.

People will be able to go outdoors for non-essential reasons and meet up with friends and family in an outdoor setting.

Forecasters at the weather agency said the north-west could be the worst affected in the storm, with the south-east at risk at times.

Wet and windy spells could last until Easter Sunday for the worst affected regions.

Met Office forecaster Aidan McGivern said: “The storm track goes to Iceland. The further north and west you are, the more changeable it will be, with outbreaks of rain and wind at times.”

Another Met Office forecaster said: “Rain and stronger winds arrive in the North-West later on Tuesday.

“Northern and western parts will see the heaviest rain and strongest winds from Thursday, with unsettled conditions and possibly fresh to strong winds for other parts at times.

“Unsettled conditions may continue in the northwest through to the end of March and to April 4. Southeastern parts are most likely to experience the best of any dry and sunny conditions.”

Ex-BBC and Met Office forecaster John Hammond of weather trending said: “Most of the UK faces a more disturbed spell, with rain initially heaviest in the North-West from midweek.

“March ends with low pressure on centre stage, with rainfall and cool conditions into April.

"We may see northerly winds. April isn't too late for wet snow.”

The UK has enjoyed milder temperatures the past week, vastly different to the 'Beast from the East 2' threats at the end of February.

Some areas may reach double figures as temperatures are set to rise on Monday, but this may be affected by the wind and rain later on in the week.