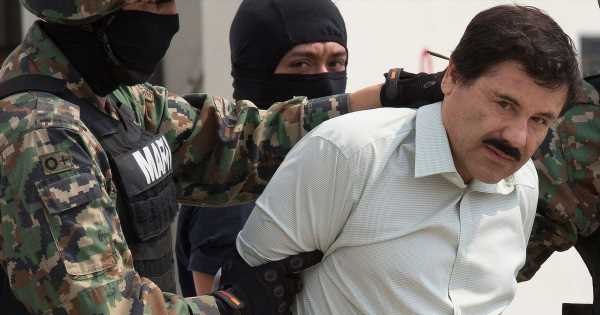 The Mexican Army are closing in on the brother of infamous drug cartel boss Joaquín 'El Chapo' Guzmán after arresting five of his bodyguards who were posing as marines.

Aureliano 'El Guano' Guzmán-Loera is himself now a high-ranking member in the Sinaloa Cartel – Mexico's largest drug trafficking organisation that was led by his brother until his arrest in 2016.

State Police and the Mexican Army received a tip off about potential cartel activity in La Guásima, Sinaloa, on November 11.

Soldiers and police followed up on the tip and spotted several men carrying firearms standing guard outside a house along a dirt road.

Guns were drawn on both sides before the cartel members attempted to flee. Five men – identified as Luis Ángel 'N', Jorge 'N', Ricardo 'N', Luis Fernando 'N' and another Jorge 'N' – were arrested.

They were charged with drug trafficking and sales, extortions, kidnappings, and homicides among other things, according to Mexican news channel Foro TV.

The men were all found in possession of firearms including long-barrelled weapons, grenade launchers and handguns, according to Borderland Beat.

All five men were identified as bodyguards for El Chapo's brother, but it remains unclear whether El Guano was among those who managed to escape or whether he was hiding elsewhere.

The army and police did not disclose whether they searched the house where the men were found.

The US government currently has a $5million (£4.2m) bounty on El Guano's head.

The same applies for El Chapo's sons Iván Archivaldo, Jesus Alfredo, Ovidio and Joaquín. They form Los Chapitos – one of two factions of the Sinaloa Cartel that emerged following their father's arrest.

According to Borderland Beat, only two local news channels have reported the arrest of El Guano's bodyguards.

They say that "the striking lack of coverage may demonstrate the degree of control" the Sinaloa Cartel exert in their heartland.

It comes after El Chapo's nephew was gunned down by two men in September.

Edel Guzmán Martínez, 36, was partying in the main square of Guadalupe y Calvo, a town in the Mexican state of Chihuahua, in the early hours of September 15 when the attack took place.

Edel was rushed to a local hospital but died soon after arriving because of his wounds.

Ministerial and military sources confirmed that the victim was in fact the nephew of El Chapo.

According to Blog del Narco Mexico, those same sources indicate that two people were detained in relation to the murder.