A major in the British Army accused of raping a female captain after a Burns night supper has been cleared today after telling a court martial that he could not remember having sex with her because he was so drunk.

Major Gregor Beaton, 33, had denied the charge and claimed he was the victim after he was arrested on suspicion of rape and quizzed by Royal Military Police.

After a panel of senior officers cleared the Afghanistan veteran today, Maj Beaton burst into tears, with Judge Advocate General Jeff Blackett saying Parliament should review the law around cases when neither party can remember what has happened.

The judge said: ‘You have been found not guilty by this board. It is intolerable that this case has taken so long to get to court and that is unacceptable.

‘This was an unusual case because neither party can remember having sex.’

He said that in his view ‘Parliament should look again’ at the area of law surrounding cases where neither party can remember what has happened. 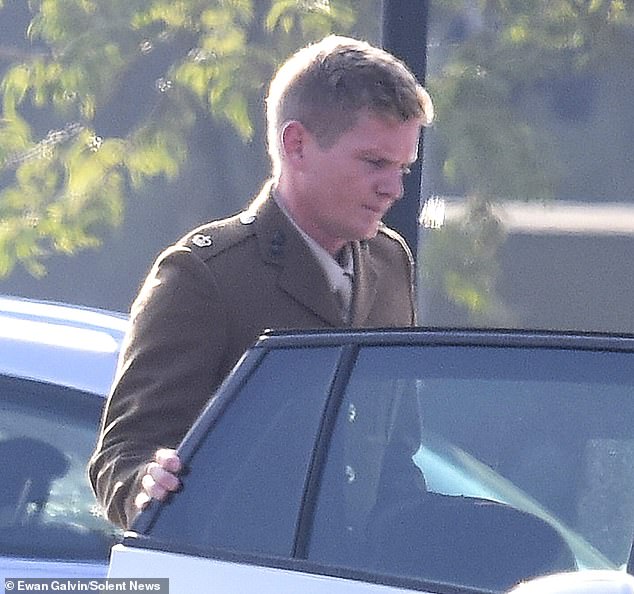 Major Gregor Beaton, 33, claimed he was the actual victim after he was arrested on suspicion of rape and quizzed by Royal Military Police. The Afghanistan veteran was cleared today 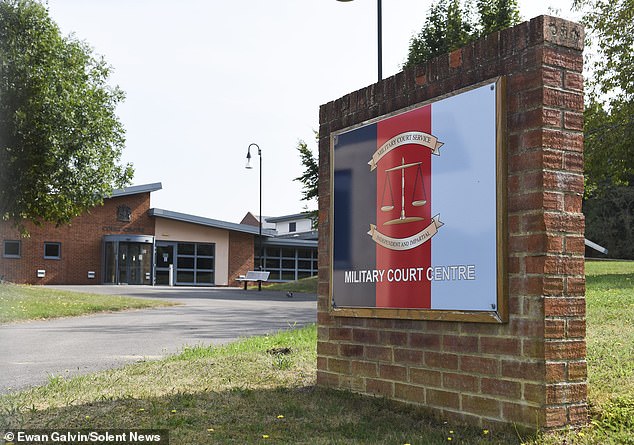 Bulford Military Court in Wiltshire heard that when they woke up in bed together neither of the officers could recall having had sex. As the panel recorded their verdict, Maj Beaton, a Sandhurst graduate of the 14th Regiment, Royal Artillery, broke down in tears

‘There must be a better way of dealing with these cases,’ the judge added.

Bulford Military Court in Wiltshire heard that when they woke up in bed together neither of the officers could recall having had sex.

As the panel recorded their verdict, Maj Beaton, a Sandhurst graduate of the 14th Regiment, Royal Artillery, broke down in tears.

The three day trial heard the female officer had been so drunk during the Burns night supper on a military base that a female colleague had to put her to bed.

Why was Major Gregor Beaton’s rape case not handled by the CPS?

Military courts have been able to try rape and other serious offences since 2009, and an increasing number of rape and sexual offence cases are now being dealt with in the military system.

Though civilian law should take precedence where alleged offences take place in the UK, the Ministry of Defence (MoD) has reserved the right to try serious offence cases involving only military personnel.

All this could change, however, following an official review of the Service Justice System was carried out by ex-senior Crown Court judge Shaun Lyons and Sir Jon Murphy, the ex-chief constable of Merseyside.

They recommended ‘the court martial jurisdiction should no longer include murder, manslaughter and rape when these offences are committed in the UK, except when the consent of the attorney general is given’.

The MoD said that it ‘believes that the service justice system is a system capable of dealing with the most serious offences and should be able to continue to do so’.

Though the MoD said that ‘some cases’ are best dealt with by military police and courts and that ‘the main principle in deciding who has primacy is whether the offence has any civilian context’, Defence Secretary Ben Wallace has indicated that armed  forces rape cases could be heard in civilian courts after agreeing to consider proposals following appeals.

In a letter seen by the Telegraph, it is said Mr Wallace ‘has decided to give fresh consideration’ to a legal challenge brought by three women who claim they were victims of rape while serving in the Armed Forces.

The women sought a judicial review after Mr Wallace announced in February that he would not act on the recommendation by Shaun Lyons in his Service Justice System Review, that cases involving rape, murder and manslaughter in the UK be tried by the Crown Prosecution Service.

There are growing concerns that a rising number of rape cases are tried at court martials – and that the conviction rate is lower than in civilian courts.

The captain said she had been horrified when she then woke naked next to the Scot with ‘absolutely no memory’ of what had happened between them the night before.

She had been ‘flirting’ with another soldier throughout the evening and at first thought it was him, but when she saw it was Maj Beaton she panicked.

The court martial heard the female captain, who cannot be named for legal reasons, claimed she then had a ‘flashback’ of someone ‘dragging her hips from behind’.

When she confronted Maj Beaton he told her he was ’99 per cent sure’ nothing had happened.

When the woman asked him again if he was sure they hadn’t had sex and said she wasn’t on any form of contraception, Maj Beaton offered to go into town with her to get her the morning after pill.

He told the court he had a daughter, who is now aged eight, through an unplanned pregnancy and he wanted to help the woman if she might be pregnant.

After being arrested, the father-of-one told investigators he was so drunk he could not recall what had taken place, adding: ‘I did not want sexual contact. I did not initiate it.’

In his initial interviews, he also said: ‘I do not remember having sex with her. You do not have sex with people who are that drunk.’

When told that his DNA had been found inside the woman, he suggested that meant he must have been forced into sex and should consider making a complaint himself.

During the police investigation his army lawyer advised him to give a ‘no comment’ interview but Beaton insisted he had nothing to hide.

Giving evidence, he told the court: ‘I had nothing to hide, I had no reason to. I knew there hadn’t [been a rape].’

Maj Beaton said he had simply chatted to the woman, who had wandered into his room after previously being put to bed by a friend because she was so drunk.

He told the court he then took her back to her own dorm and they chatted for a while about the soldier she had been ‘flirting’ with, before he fell asleep in an armchair.

Maj Beaton said he woke when the woman went into the bathroom, then sat on the end of her bed and wrapped himself in a blanket but accidentally fell asleep.

He told the court that the next day she quizzed him over what had happened during the night, saying: ‘She kept asking and said ‘are you positive?’

The court heard that during the Burns night celebrations Maj Beaton drank two highballs of beer, a few glasses of white wine and a small glass of port. As the evening went on he also drank Jäger and at least five measures of whiskey.

The captain had drunk red wine, Jäger, Prosecco and whiskey during the night.

A five-person board, made up of one woman and four men, took an hour and forty five minutes to clear Maj Beaton of a single count of rape, which he had denied.