The papers allege Mr Banks raised money from investors for the mines, but then put the funds into the Brexit campaign and other interests, according to the news programme.

The court documents relate to a civil action between Mr Banks’s diamond company Distribution Rocks and its partner firm, Supermix.

The papers quote a former business partner as stating: ‘I was finally made aware in October (2015) that in truth, Banks had been dealing with Russians who contemplated investing in the mines, Channel Four News reported 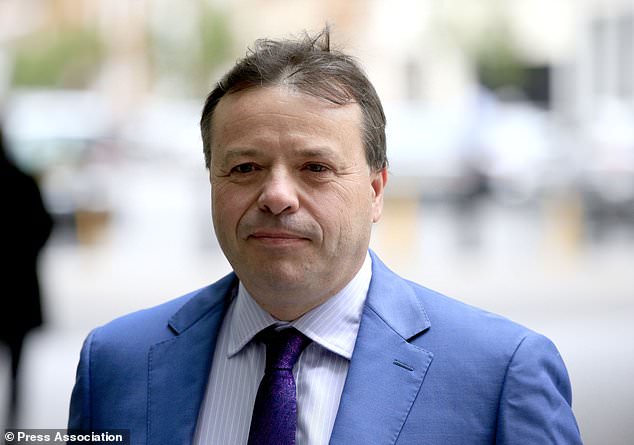 ‘I was informed by Banks that he had travelled to Russia and discussed with them the diamond opportunities as well as gold mining opportunities in Russia. He further indicated that he would be meeting with the Russians again during November (2015).’

The papers state: ‘Throughout the early part of 2015 Arron Banks was promising the imminent arrival of these funds. Construction of operation on the mine sites continued in expectation of the funds, however these funds were not forthcoming.

‘It has recently become apparent that the funds were in fact raised but were used by Arron Banks in other interests that he has including but not limited to his participation in the funding of Brexit.’

The documents also claim that Mr Banks planned to raise money from investors by issuing a bond, according to the programme. 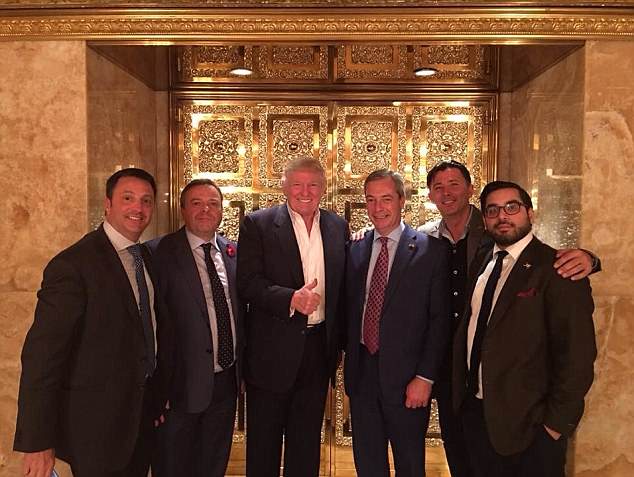 Mr Banks (second left) has faced a series of questions about his links to Brexit, Nigel Farage (third right) and Donald Trump (third left shortly after his Presidential victory in 2016)

Who is Arron Banks – the man who ‘bought Brexit’? 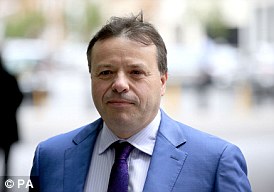 The multi-millionaire (pictured) has donated millions to Ukip and in 2016 he backed Mr Farage’s Leave.EU group

Arron Banks has been dubbed ‘the man who bought Brexit’ for the way he bankrolled Nigel Farage’s campaign to leave the EU.

The multi-millionaire has donated millions to Ukip and in 2016 he backed Mr Farage’s Leave.EU group.

He was pictured alongside Donald Trump when the President met Nigel Farage in New York just days after his shock US election victory.

But now he is facing calls to explain a series of meetings with Russian embassy officials.

Mr Banks, 52, made his fortune from the Bristol-based insurance broker Brightside which he founded. He then went on to found another firm, GoSkippy, and is now said to be worth £100million.

He is married to Russian Ekaterina Paderina and has five children.

Originally a modest Tory donor, in 2014 he defected to Ukip in desperation at David Cameron’s stance on Europe.

William Hague made the mistake of describing Mr Banks as ‘somebody we haven’t heard of’ following his defection – prompting him to up his donation to £1million.

He said: ‘I woke up this morning intending to give £100,000 to UKIP – then I heard Mr Hague’s comment about me being a Mr Nobody. So in light of that I have decided to give £1million.’

The affidavit states: ‘During the latter part of 2014 further funding was required for the various businesses.

‘Banks advised that he had various funding options open to him, one of which was to create a financial instrument (a diamond bond) whereby £4 million and 5 million US dollars would be raised for the capitalisation of the business and the other was through a loan from Southern Rock, another Gibraltar headquartered insurance company belonging to Arron Banks and/or STM Life, also of Gibraltar, over which Arron Banks exerted significant influence, although he was not the majority shareholder.’

Mr Banks, who branded the story ‘fake news’, told Channel 4 News that the bond was considered in 2015, but never went ahead.

In a statement, he said: ‘Every mining group in the world raises funds via equity or bonds to fund their activities, to suggest otherwise is false. Both mines are operating normally under new more successful management.

‘In the end, we did not proceed with the bond raise or any form of external fund raise.

‘Unless I was Mystic Meg it would have been impossible to know that I would be involved in the referendum campaign or that it would even take place!

‘The notion that Brexit was funded by the Russians is risible and just part of the continuing attacks on anyone involved with Brexit.

‘The other evidence Channel 4 have provided is from a court filing by a former business partner responding to our claim of damages.

‘We deny in full all of his allegations and would comment that since he is being sued for considerable damages he is hardly a reliable witness.

‘I have had no business dealings with any Russian investors through any of my businesses.’

Chairman of the Commons Digital, Culture, Media and Sport Committee Damian Collins said: ‘I think the allegations throw a completely different light on Arron Banks’s relationship with the Russians.

‘This all happened before his famous ‘boozy lunch’ with the Russian ambassador.

‘So the Russians knew that Arron Banks needed money and he was looking to them for it.

‘Now I think he has to explain once again whether anything came of these meetings and discussions, and why he didn’t tell us when he was in front of the committee about these other meetings as well. It was clearly very material to his interests.’