A Melbourne artist says he will remove a three-storey mural he painted in the CBD of a Ukrainian soldier hugging a Russian soldier after the city’s Ukrainian community decried it as a “profound insult” that downplayed the brutal invasion of their homeland.

The mural on Kings Way entitled Peace Before Pieces was revealed this week after being created by Melbourne-based artist Peter Seaton, who works under the name CTO. 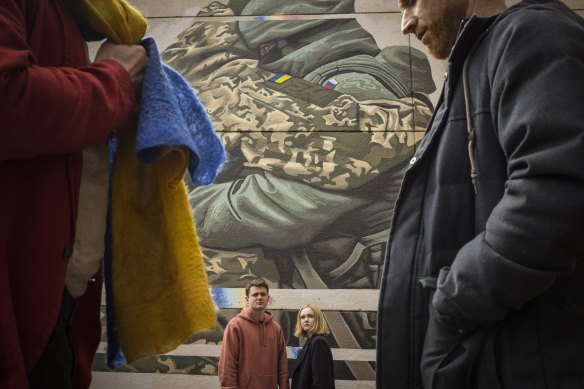 The artwork upset local Ukrainians who likened it to Russian propaganda and compared it to a rapist and a victim hugging while the crime is still occurring. Seaton on Sunday said he would remove the mural by Monday.

Ukraine’s Ambassador to Australia Vasyl Myroshnychenko said the work was “utterly offensive to all Ukrainians” and had called for it to be removed.

“The painter has no clue about the [Russian] invasion of Ukraine and it is disappointing to see it done without consulting the Ukrainian community in Melbourne,” he said on Twitter.

Art 4 Ukraine Australia said in a statement it had been in contact with Seaton before the mural was painted, but he had decided to proceed with the concept “regardless of our pleas for reason”.

“Peter had presented this piece to our team, who explained the insensitive nature of the image and that the message was inappropriate,” the group said.

The artist collective implored Seaton on Sunday to remove the Ukrainian and Russian flags on the mural to “merely portray an image supporting peace worldwide”.

In response, Seaton said he had initially received positive feedback from some in the art collective, but as time went on and the piece was discussed further by the committee, a belief evolved that the work could be misconstrued as “offensive”.

“I had to get behind a message of peace, that’s always what I’m about,” he said.

Noble Park Association of Ukrainians in Victoria branch president Liana Slipetsky said when she first saw the muralshe felt embarrassed that it had been erected in Australia.

“What would Ukrainian refugees think of that? They’ve just sought safe haven here and then that mural’s in their face? What is that saying to them about Australians?” she said.

“We need to keep Ukraine front of mind, but in doing so, we need to be telling the truth and to me, this is just like Russian propaganda.”

Seaton said he did not wish to excuse Russian acts of aggression and was saddened to have hurt the Ukrainian community.

He said he had no affiliations with the Russian community, and the mural was fundamentally a “message of peace” and a meditation on the futility of armed conflict.

“If you’re going to fault me on anything, it’s that I have some crazy, pie-in-the-sky hippie ideas around unity and that we’re all one.”

Seaton was selling 12 NFTs (non-fungible or “non-exchangeable” tokens) of the mural. The NFT video – which has audio from a US nuclear body test – depicts the mural being bombed and engulfed by a mushroom cloud, before the world explodes.

The artworks are currently selling for 0.08 of the cryptocurrency Ethereum, or around $124. Seaton said on Instagram that proceeds from the sale of the NFTs would go to the organisation World Beyond War.

The artwork was originally going to be painted over once all the video NFTs sold, Seaton said.

Dr Olga Boichak, a lecturer in digital cultures at the University of Sydney, said the image created a false equivalency between the “unprovoked, unwarranted, unilateral aggression of Russia” and Ukraine.

She said the image perpetuated a harmful narrative that the countries are “brotherly nations”, despite Russia repeatedly trying to invade and colonise Ukraine.

“There have been many instances where our language and culture has been limited, where people have been executed and where genocide has happened… This hug is a chokehold,” Boichak said.

“That’s what makes this mural really problematic … Ukraine is not in the position to lay down weapons and stop fighting.”

The Australian Federation of Ukrainian Organisations’ Stefan Romaniw said in a statement that by accepting a false narrative that all the world needed was peace, the artwork actually “supports evil”.

“What would people think if a mural featured a rapist and a victim hugging? Wouldn’t that offend any decent person’s conviction that to ask a victim to excuse their rapist while the crime is still occurring, not been acknowledged, and not been atoned for, is wrong?”