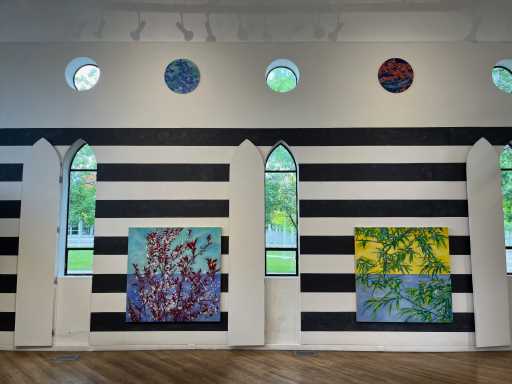 Trine Bumiller is the most intimate sort of landscape painter. She captures the vastness of the Western terrain in oil, but she does it tree by tree, bough by bough, twig by twig.

Bumiller paints grand things in small ways and there is a magic to her method, an intimacy that can only be captured when an artist checks their ego and resists the impulse to use one painting to capture an entire mountain range or the full expanse of an open sky — instead recognizing that nature’s majesty is best-rendered by zooming in on the details.

As a scene painter, she is most interested in the way light passes along an individual leaf or ripple of water or how the bright colors of a single spring blossom contrast beautifully to the solid tones of the skeletal branch that nourished its birth.

Bumiller edits her scenes like a photographer. She cuts off the trunks of trees or the tips of their tallest shoots, so viewers focuses on the center, on the soul of these living things. Her flowers, seedlings and vines are strangers, but always seem to be sharing their most personal details when we look at them.

Over her career, Bumiller has balanced this narrowness of perspective by putting her paintings into series of works or arrangements that address larger ideas and issues. Her “100 Paintings for 100 Years” was an amalgam of plant and water closeups that came together to evoke the total geography of Rocky Mountain National Park. Her “In Memoriam” featured 13 portraits of individual golden spruce trees that told a complete tale about a whole endangered species.

Her latest solo exhibition at Emmanuel Gallery, titled “Garden of Eden,” falls into that project category. The show has 17 paintings of random trees, shrubs and weeds but they are brought together to form something like a formal garden. The oil paintings on panel surround gallery visitors on all sides, creating an immersive indoor experience that reflects the feeling of being in a lovely backyard at the height of spring when nature’s energy is on full display.

Bumiller offers up not just an exhibition of recent work, but also an enveloping environment, heightened by the fact that she painted horizontal black stripes along all of Emmanuel’s walls before hanging her work on them.

The lines, she says in her artist statement, are a nod to Emmanuel’s history as a church; she recalls seeing such lines on old cathedrals when she visited Italy as a student. But they double as something like a slotted wooden fence that contains her conceptual garden into a solitary space.

It works. Emmanuel, constructed in 1879, was in its past a sacred site, and it touts itself as Denver’s oldest standing religious structure. It started as an Episcopal chapel and then spent decades in the 20th century housing a Jewish synagogue. It is on the National Register of Historic Places.

But the building has had a very different personality since 1973 when it was absorbed in the Auraria Campus, the urban renewal project that made space for three educational facilities, the University of Colorado Denver, Metropolitan State University of Denver and Community College of Denver.

The Romanesque-style building still looks like a church from the outside, but the interior was converted years ago into a white-cube style art gallery where exhibitions have moved it far from its original purpose. One recent artist showed works made from their own body hair, another exhibited a series of photos of his neighbors that he took from behind his bedroom blinds without their knowledge — all interesting material, for sure, though apart from the usual stuff you find in a working church.

But Bumiller’s exhibition is transformative for Emmanuel, and in such lovely way. She does respect its past, allowing her paintings to fall in harmony with the architecture rather than trying to obliterate it.

Emmanuel’s back-in-the-day remodel included placing a series of small, round windows along the upper reaches of its high walls, and Bumiller made a series of site-specific paintings that are the exact dimensions of the windows. They hang alternately — a round painting between each round window on all four sides of the gallery — so you get the actual scenes of nature visible though the windows, interspersed with Bumiller’s imagined scenes of the same subject matter, though with exaggerated colors and shapes.

It’s a seamless mix that reminds visitors how nature and art truly can complement one another.

Bumiller’s larger paintings, 4 or 5 feet square, have their own personality and come with varying levels of abstraction. The artist presents them mostly as diptychs, painting on wood panels that are connected into one work but remain distinct.

The exhibit’s largest work, “Two Trees,” is actually presented on five panels, each hung vertically. Again, the foreground of the picture remains constant but the background shifts from green to purple to yellow. Viewers can make what they want from these stark color changes, but they do serve to bring out different visual aspects of the trees, perhaps as sunlight shifts throughout the day or as changing weather might alter the way we experience them.

Bumiller is pressing spiritual ideas here; clearly there are biblical references in the title of the exhibition, and the two trees in the five-parter are meant to represent the Tree of Life and the Tree of Knowledge in the Garden of Eden. By emphasizing the building’s past as a church rather than gallery, she moves her work into the realm of the religious — so much so that a believer in divine powers might legitimately be tempted to pray at this exhibition, or, in some cases, to pick its fruit.

And Emmanuel Gallery does feel sacred in this incarnation, though not necessarily in an evangelical sense. The piety is more reflective of the way that we might worship nature, or tranquility, or the organic comfort of any quiet, contemplative space.

In that way, “Garden of Eden” serves its own type of higher purpose. It is an oasis, a place to go and relax in a summer when many people are feeling stressed. It does have the aura of a garden, but with air conditioning. It’s there if you need it.

IF YOU GO:
“Garden of Eden” continues through Aug. 5 at Emmanuel Gallery, Larimer and 10th streets on the Auraria Campus in downtown Denver. It’s free. Info at 303-315-7431 or emmanuelgallery.org.